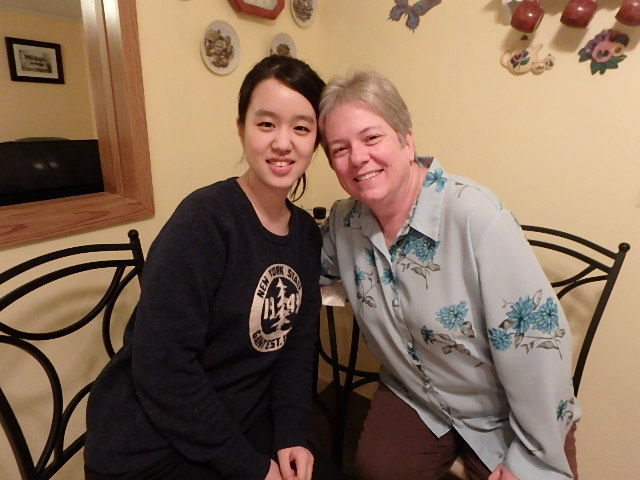 Nono Sueoka, a Franklin County High School exchange student from Tokyo, Japan, and her host mom, Cindy Belanger, say they are enjoying their year together.

Nono Sueoka, a Franklin County High School exchange student from Tokyo, Japan, and her host mom, Cindy Belanger, say they are enjoying their year together.

After raising two sons, Cindy Belanger of Rocky Mount has a daughter, for most of a year. Nono Sueoka from Tokyo, Japan, arrived last August and will remain with Belanger, her host mom, until June.

In 2011, Belanger became a widow. To deal with loneliness, a friend suggested she host an exchange student. Belanger said after nearly five years of working with several agencies, she had not received the placement of a student, so she partnered with Youth For Understanding.

“The most wonderful thing in the world is when I come in the back door and she [Sueoka] says, ‘Welcome home, Mom,’ ” Belanger said.

The pair have had fun doing many activities, including attending the Franklin County Agricultural Fair last September where Sueoka rode a horse, celebrating the creation of the Korean alphabet at the Taubman Museum and attending an opera at the Jefferson Center with tickets the teen had won.

“It’s a good experience for me to come [to the U.S.],” Sueoka said. “Everything in America is big, the people, the food, the schools.”

She said she pursued a foreign exchange because she has fun learning about other countries and their cultures and to help with learning English. In Japan, students study English in sixth through 12th grades.

School in the U.S. is different from what Sueoka is used to. In Japan, she rides her bike to and from school, a 5-mile ride. She said she leaves her home at 7:30 a.m. and returns home for dinner around 10:30 p.m. Here, Sueoka rides the bus to FCHS.

The amount of studying is another major difference between the schools.

In Japan, Sueoka said many students attend cram school in the evenings so they can advance their education because getting into schools can be competitive. High school is optional and must be paid for whether it’s private or public, and all students must take an entrance test for high school.

Similar to a school day in Franklin County, classes in Tokyo start in the morning around 8:30 a.m. and finish in the afternoon around 3:30 p.m. Three days a week, Sueoka takes violin lessons after school and does homework. Then, from 7 to 10 p.m. she attends cram school.

She said she doesn’t think students in the U.S. study as much.

“Most students here work after school,” Sueoka said. “(In Japan) we don’t have time. We just do cram school.”

While high school students in Japan must study diligently, Sueoka said in college they do not. Getting into college is difficult, she added. Approximately one out of five Japanese students will get into an average college and one out of 10 will get into a good college.

Last semester, Sueoka took English, U.S. history, concert band and English as a second language. This semester she is taking algebra II, biology, symphonic band and ESL. She said she found U.S. history challenging due to similar names of historical figures such as Andrew Jackson and Andrew Johnson.

However, she found algebra II to be easy. Sueoka doesn’t need a calculator either, because she does the work in her head.

“I was surprised how everyone couldn’t do math with their brain,” Sueoka said.

Her algebra II teacher, Jennifer Staker, said, she found Sueoka’s mathematical ability “refreshing, when so many of our students these days are calculator-dependent.”

In Japan, school clubs and activities do not meet during school hours but after school. Elective classes, including band, are considered activities. Pep rallies have been a new experience for Sueoka. “They are crazy, but I like them.”

Another new experience is school dances. She went to the homecoming dance with friends and plans to go to the prom, too.

Sueoka said it has been hard to make friends because of the language barrier, but that people in her classes have been helpful and the people in Franklin County are friendly.

While Sueoka said she doesn’t see many similarities between Japan and the U.S., she said that teens are similar in that they eat a lot, sleep a lot and love their electronics.

FCHS guidance counselor Christine Capwell said having Sueoka at the high school is a benefit. “It’s great to have kids from other countries and cultures,” she said. “It opens up the eyes of our kids.”

Belanger said being a host mom has been better than she had expected.

“I ended up with a really great kid — she’s polite, considerate, outgoing and she’s always happy,” Belanger said. “The only way I know something is bothering her is if she’s quiet. I don’t have to ask her to do her homework. She just does it.”

Jokingly, she added, “If I could only get her to do yard work.”

Belanger added Sueoka cooks Japanese food once or twice a week and that it’s always wonderful.