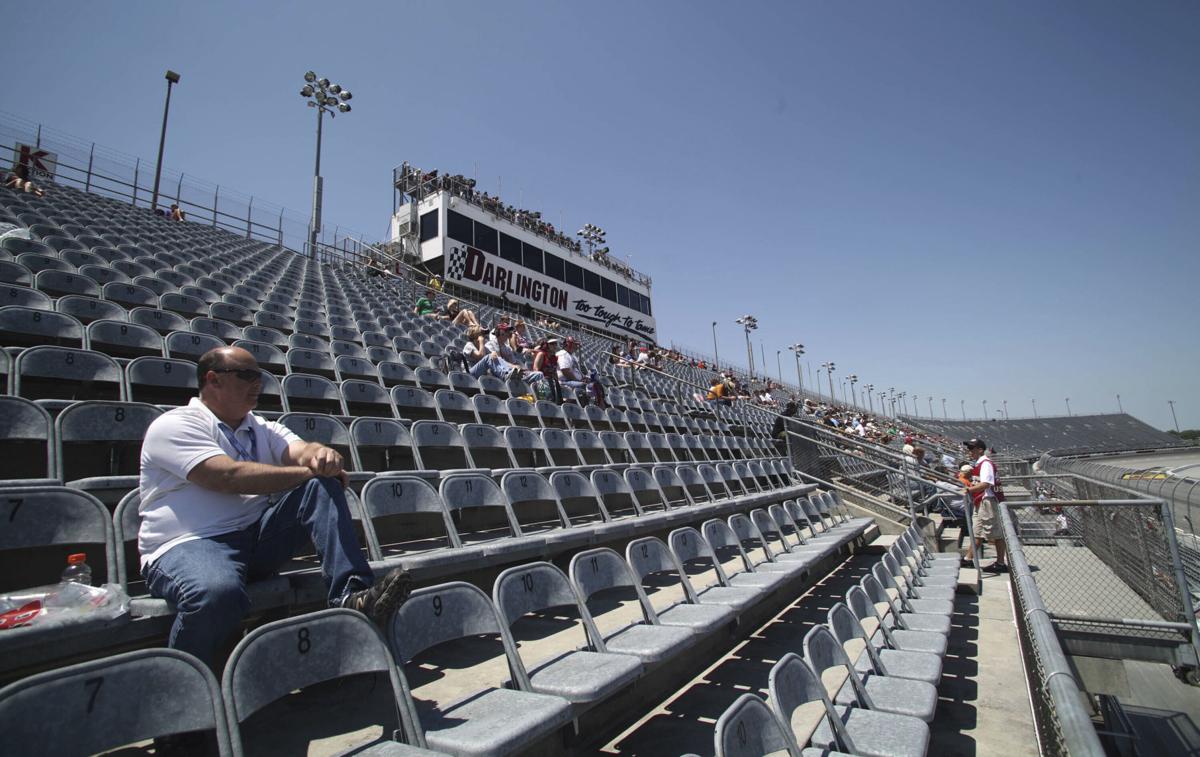 NASCAR will get its season back on track starting May 17 at Darlington Raceway (shown here in this May 2012 file photo) in South Carolina without spectators, and the premier Cup Series plans to race four times in 10 days at a pair of iconic tracks.

Ryan Blaney’s team services his car during a pit stop at last fall’s NASCAR Cup race at Martinsville Speedway. The series has been on hiatus for more than two months because of the COVID-19 pandemic, but it is scheduled to return Sunday, May 17 at Darlington Raceway and will compete at the South Carolina track on Wednesday, May 20.

NASCAR will get its season back on track starting May 17 at Darlington Raceway (shown here in this May 2012 file photo) in South Carolina without spectators, and the premier Cup Series plans to race four times in 10 days at a pair of iconic tracks.

Ryan Blaney’s team services his car during a pit stop at last fall’s NASCAR Cup race at Martinsville Speedway. The series has been on hiatus for more than two months because of the COVID-19 pandemic, but it is scheduled to return Sunday, May 17 at Darlington Raceway and will compete at the South Carolina track on Wednesday, May 20.

NASCAR announced this week that the top series of the sport will return in just two weeks.

NASCAR didn’t comment on when the sport will return to Martinsville Speedway, though it could be sooner rather than later. The sport is hoping to stay at tracks close to team’s race shops around Charlotte, North Carolina, in order to have races that can be run in a single day without having to book hotels or flights in and out of airports, both of which could help the spread of coronavirus.

However, it won’t be the racing fans have come to expect. NASCAR said these and all races for the foreseeable future will be run without fans in the stands, and drivers will have many restrictions as they try to keep working while avoiding the spread of COVID-19.

NASCAR Executive Vice President and Chief Racing Development Officer Steve O’Donnell and Vice President of Racing Operations John Bobo spoke to the media on Thursday to clear up how the return will racing will look. Here’s a bit of what they said.

Protecting against the virus

Bobo said NASCAR has engaged with an infectious disease physician and epidemiologist and worked with a number of other consulting physicians in emergency medicine who are actively treating COVID patients right now to help develop their racing plan, and all the plans have been reviewed by local health officials in North and South Carolina.

NASCAR is asking all teams and participants to self-monitor for five days for possible coronavirus symptom before arriving at the track on race day. Everyone involved will be asked to fill out a questionnaire and take an initial screening for temperature. Those arriving at the track will not be tested for COVID-19.

If there are concerns after the initial screening, that person will go into secondary screening with medical personnel, which will include heart rate and pulse oxygenation. Medical personnel will make further decisions at that point.

Teams and participants are also being asked to keep a log of who they’ve interacted with every day as a way of contact tracing. That way, if there is a positive coronavirus test those in direct exposure to that person can be informed and asked to self-isolate for 14 days.

Bobo said that NASCAR has recommended to teams that those who are travelling to events, including drivers, not come back into the race shop upon return.

The first two Cup Series races at Darlington will not feature practice or qualifying. O’Donnell said NASCAR is not ready to announce how starting position will be determined for those races.

O’Donnell said the race at Darlington on May 17 will likely include a competitive caution.

All scheduled upcoming races at Darlington and Charlotte will have live pit stops.

The Coke 600 at Charlotte on May 24 will have qualifying.

O’Donnell said the sport has considered how it will handle victory lane celebrations after the race, and said, “Our goal is to certainly have a celebration on or around the start/finish line. … Not sure of all the logistics of how we pull that off. We certainly want to try and have a trophy, at least that celebration with the driver.”

Each team will be allowed a total roster of 16 people allowed in the pit area, which includes the driver, owners, crew members, and pit crew members.

Spotters will be spaced out with 6-10 feet between each one. O’Donnell said spotters may be spaced out the roof and across the top of the empty stadium, while still being able to do their jobs effectively.

Bobo said that the setup at each track will be different, and at a short track, like Martinsville, most operations will be staged outside of the infield.

O’Donnell said NASCAR has worked with teams on a roster system to make sure races are limited as to who can attend, and any operations that can be moved offsite will be.

All essential personnel at the racetrack will go through additional screening, and everyone in the infield will be required to wear cloth masks. Social distancing guidelines will be maintained in the infield areas.

Drivers’ motor coaches will be spread out to beyond the driver/owner lot to allow for more room for drivers to self-isolate throughout the day.

Temperatures will be taken randomly throughout the event of people as needed and again as people are leaving after the race. Anyone at the track who is showing coronavirus symptoms will be processed at a designated area away from the infield care center, and removed from the event and given medical attention if needed.

After races teams will be required to disinfect equipment and haulers will be sealed to protect the next race destination.

O’Donnell reiterated NASCAR’s long stance that their intent remains to run the same number of events that were announced at the beginning of the season.

While he wouldn’t comment further on what that schedule could look like, or when the series might return to Martinsville, he said they have a schedule now that feels close to what they believe can work the rest of the season, depending on how the first few weeks of races goes.

“I would say we started about seven pencils and a lot of erasers and have moved to pen now in terms of saying to our broadcast partners and tracks that this is what we believe we can collectively do. The industry is there, as well… But until we are racing and until we see how things take place, until we see how this virus affects things down the road, we can’t say for sure.

Cara Cooper is the sports editor for the Martinsville Bulletin.