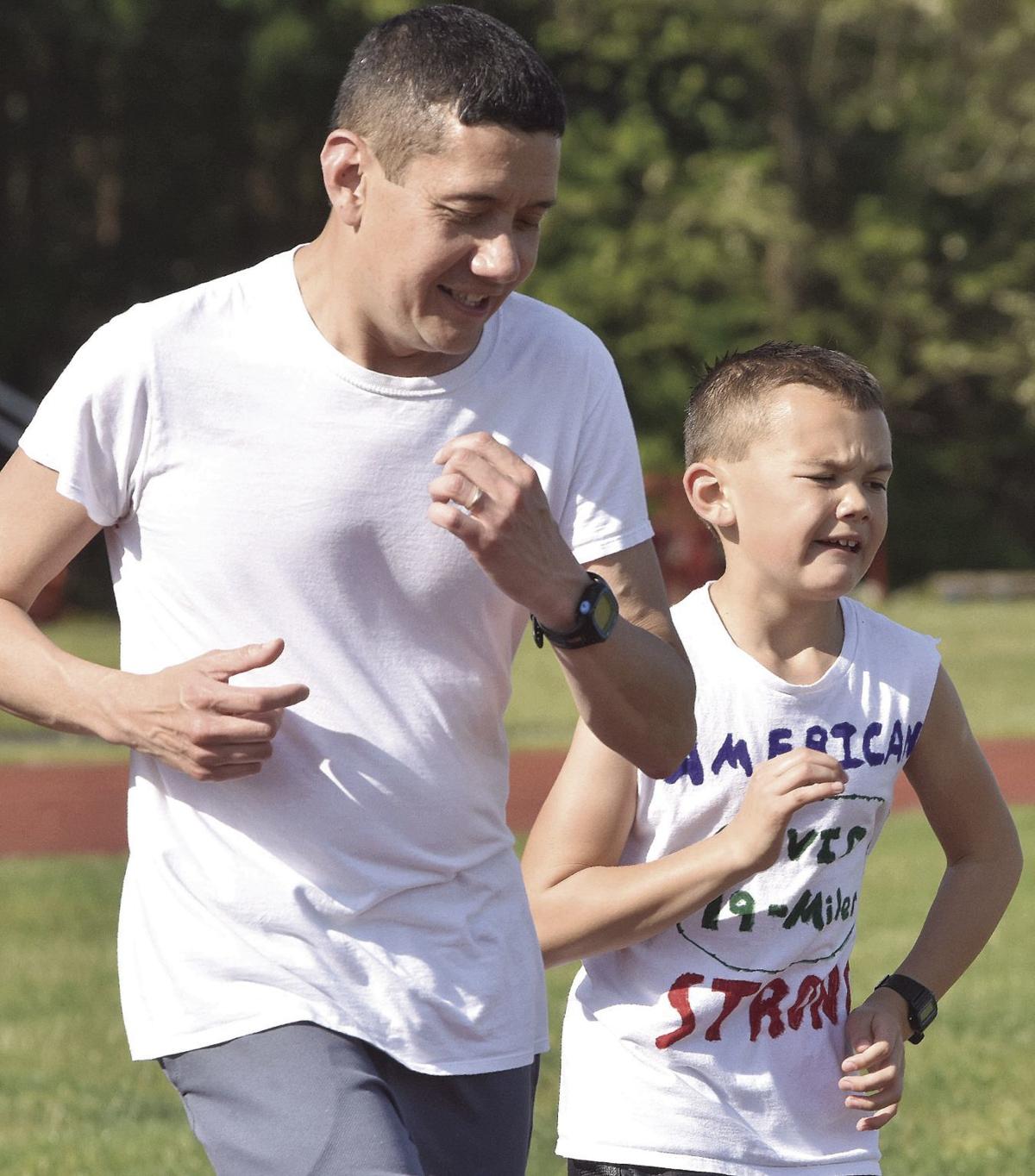 Lucas King and his father, Todd, race alongside each other in a 19-miler to help raise funds for PPE Saturday morning at Franklin. County High School’s Bruce M. Kent Track Field. 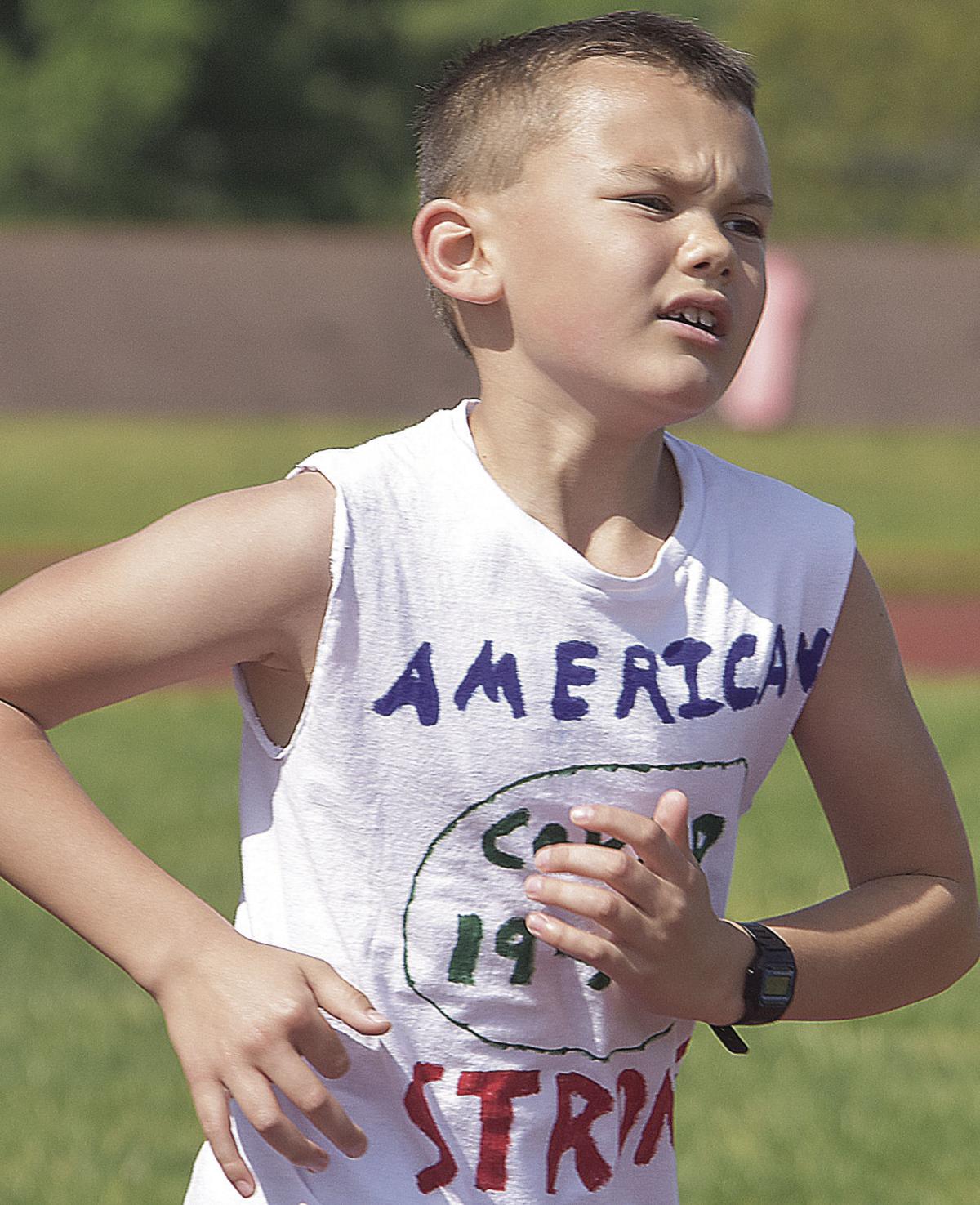 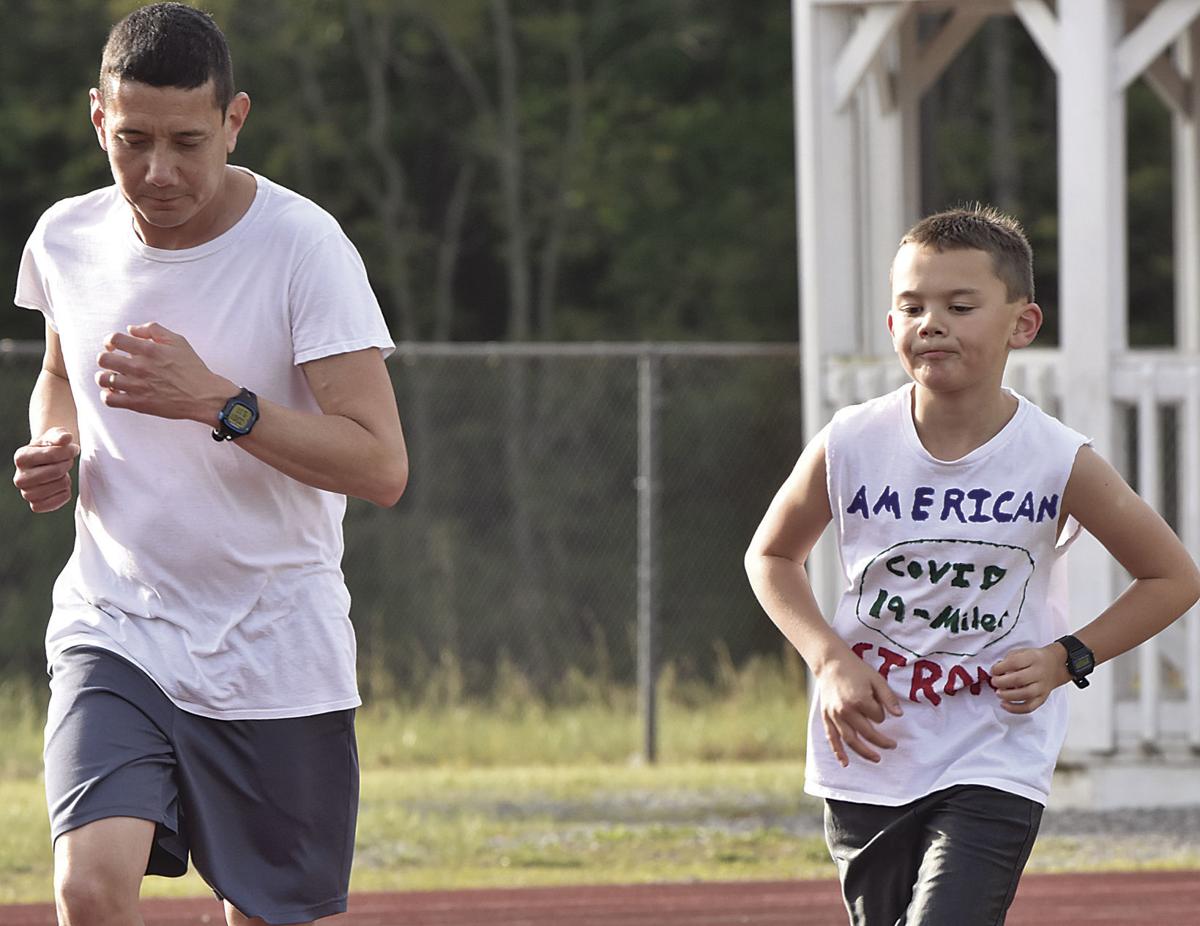 Lucas King and his father, Todd, race alongside each other in a 19-miler to help raise funds for PPE Saturday morning at Franklin. County High School’s Bruce M. Kent Track Field.

Lucas King was an early riser Saturday morning with a purpose — to lend a hand in the fight against a world-wide pandemic.

The noted local youth distance runner whose achievements have been chronicled since age 7 couldn’t help but be aware of battle against COVID-19 because he’s surrounded by the media coverage of it and because both of his parents work in the health care industry.

King, who is a month shy of his 10th birthday, traveled in circles — 76 to be exact — at Franklin County High School’s Bruce M. Kent Track Field. Those laps equated to 19 miles, a distance he had yet to conquer since starting in the sport.

While sharing the track with others going through their own training regimens, including a former U.S. Congressman, King, running ahead of, behind and alongside his father, Todd, completed his fundraiser race moments after the clock passed 10:30 a.m. or in a little more than 3 1/2 hours.

The Kings were taking part in a national fundraiser to help purchase PPE for those fighting the pandemic in hospitals — the front line in a battle that has turned America and the world upside down in just a few months.

“In the last 5 miles, I started to feel it a little,’’ Lucas King said moments after completing his race.

King said he prefers to run cross country rather than circles on a track. He and his father would change directions to break up the monotony of seeing the same scenery lap after lap.

Those who participated in the fundraiser had the option to break up the run over a period of days or to complete it all at once. The required distance for runners was 19 miles or approximately 30.6 kilometers.

“We saw a flyer for a COVID-19 miler and Lucas knew this was something he could do to help,’’ Todd King said.

The younger King, wearing a shirt inscribed with the words “America Strong” and emblazoned with his surname and his favorite No. 12 on the back, is competitive for his age. His track and field season at Christian Heritage Academy and his participation in local and area races have been interrupted because of the pandemic.

King races for an AAU team and has added swimming and bicycling to his repertoire, thus triathlons could peak a future interest.

When school returns to session this fall, King will be in the fifth grade and he can begin competing for CHA’s middle school cross country squad. He had trained with the Knights varsity and middle school runners after being discovered by the school’s former coach Eric Miller.

King said he remembers his first race, the annual Heritage Classic 5K at age 6. He competed in his first half marathon (13.1 miles) at age 7. The Crooked Road 24-hour race is in his future. His father has raced in that one that is contested on a course laid out at Waid Recreation Area and Sports Complex.

King’s talents have been on display throughout the state in such events as the Virginia Ten Miler in Lynchburg, and in Tennessee, Florida, Wisconsin, Maryland and North Carolina too.

“My dad was a runner and I wanted to be runner too,’’ King said of his start in the sport. “One day (CHA) was going on a training run. I wanted to come along, so I jumped in. It was a nine miler. It was the first time I met Coach Miller.’’

That run took place on the Dick and Willie Trail in Martinsville.

“It was in the summer. Then, I started training with the team when I was in the second grade,’’ King said.