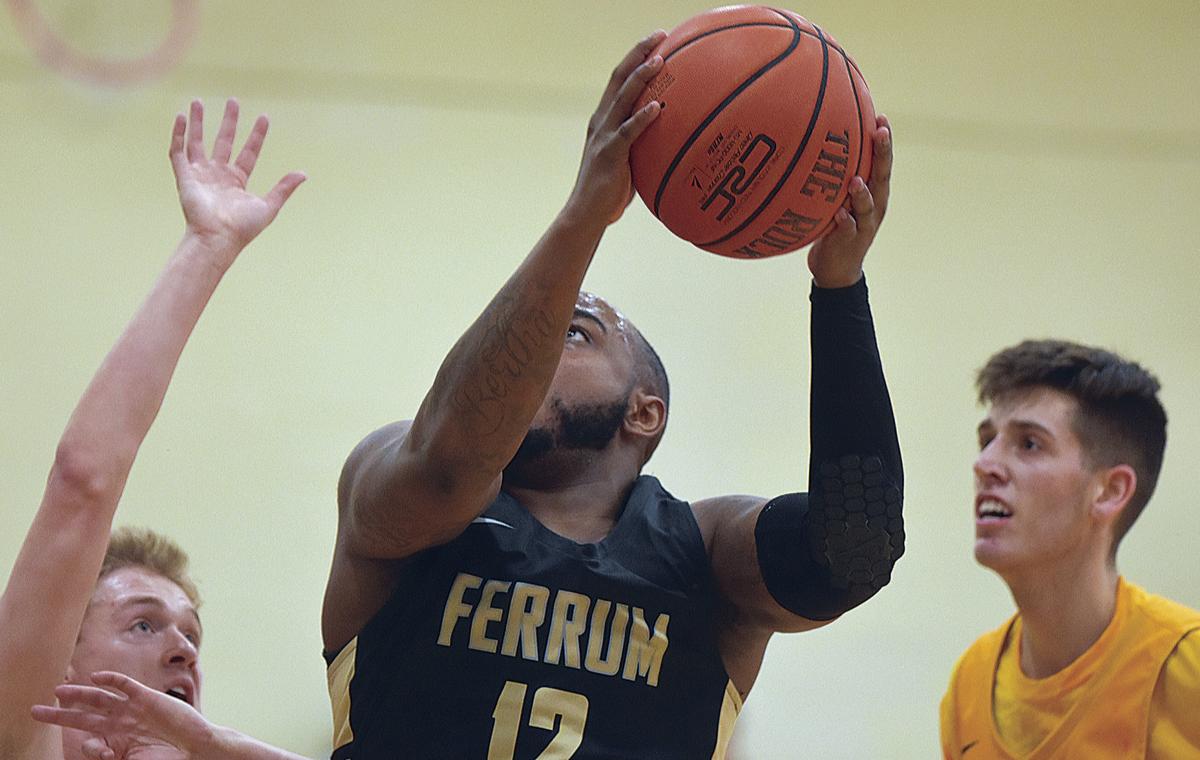 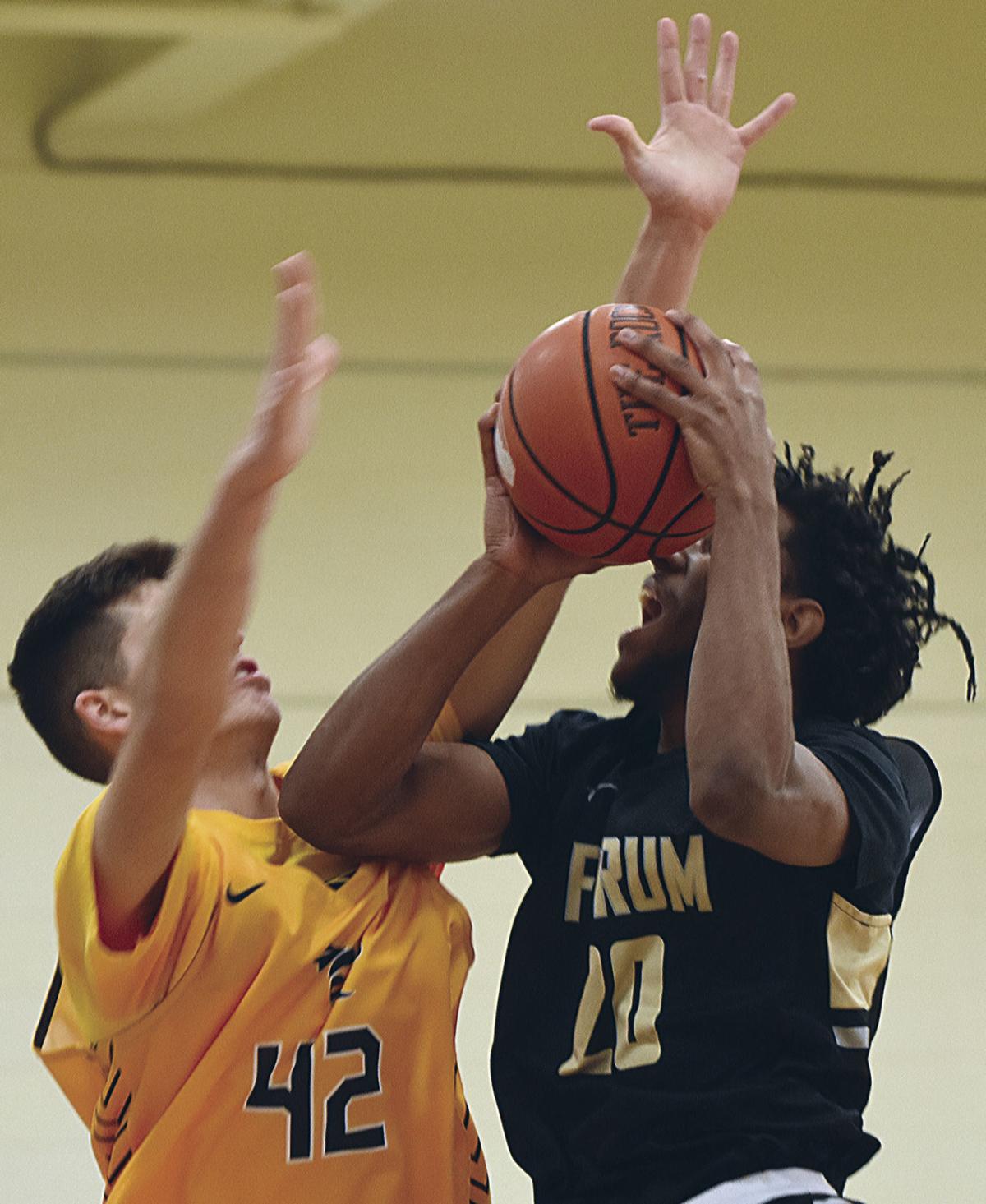 Ferrum College's Marcus Plair (right) makes a move to the basket while being checked by an Emory & Henry College defender. The Panthers and the Wasps face off Tuesday at William P. Swartz Gymnasium in the first round of the 2020 Old Dominion Athletic Conference (ODAC) men's basketball tournament. 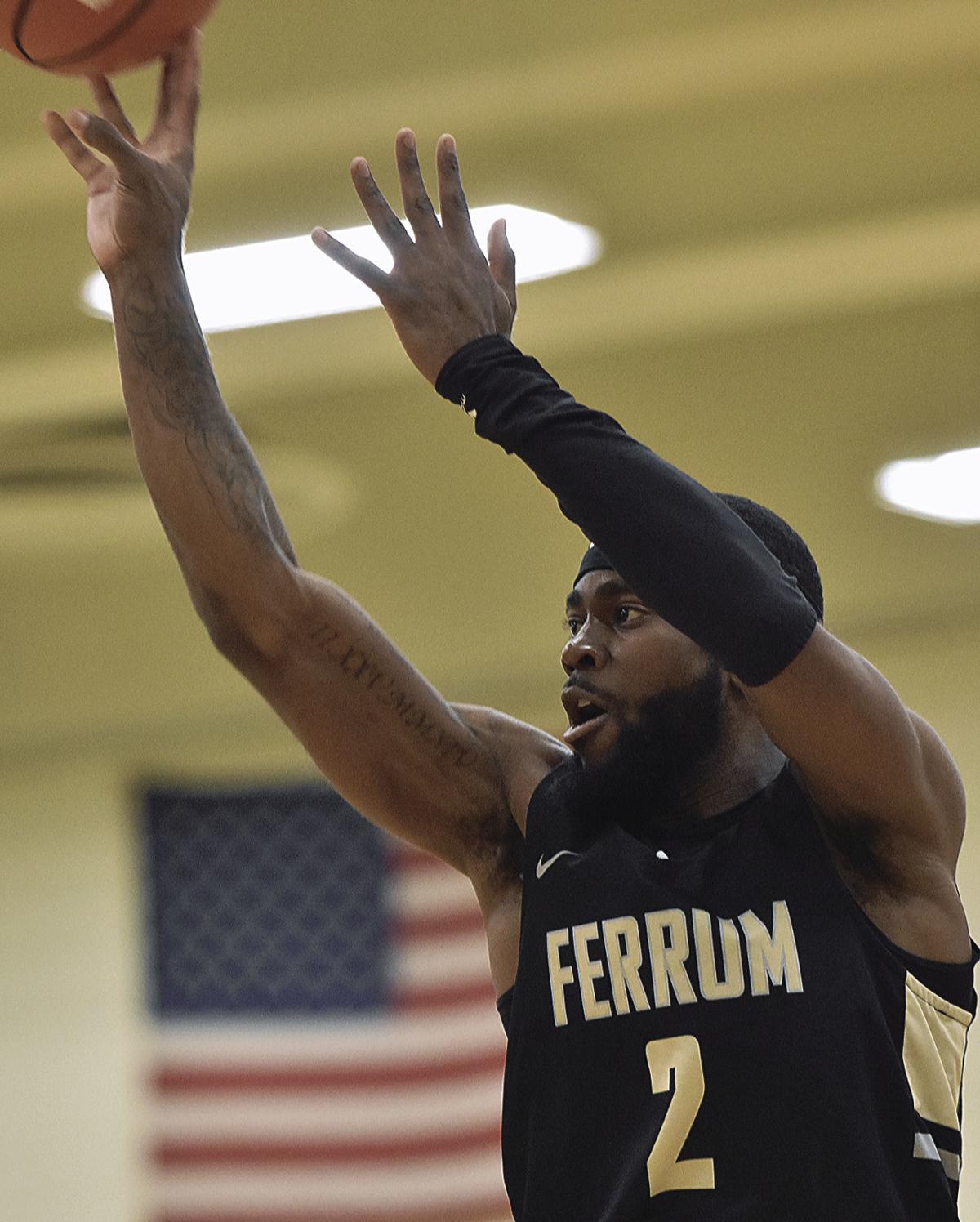 Senior Rashad Reed fires a jumper from the 3-point arc for the Panthers. He has scored 1,258 points and ranks sixth in career scoring. 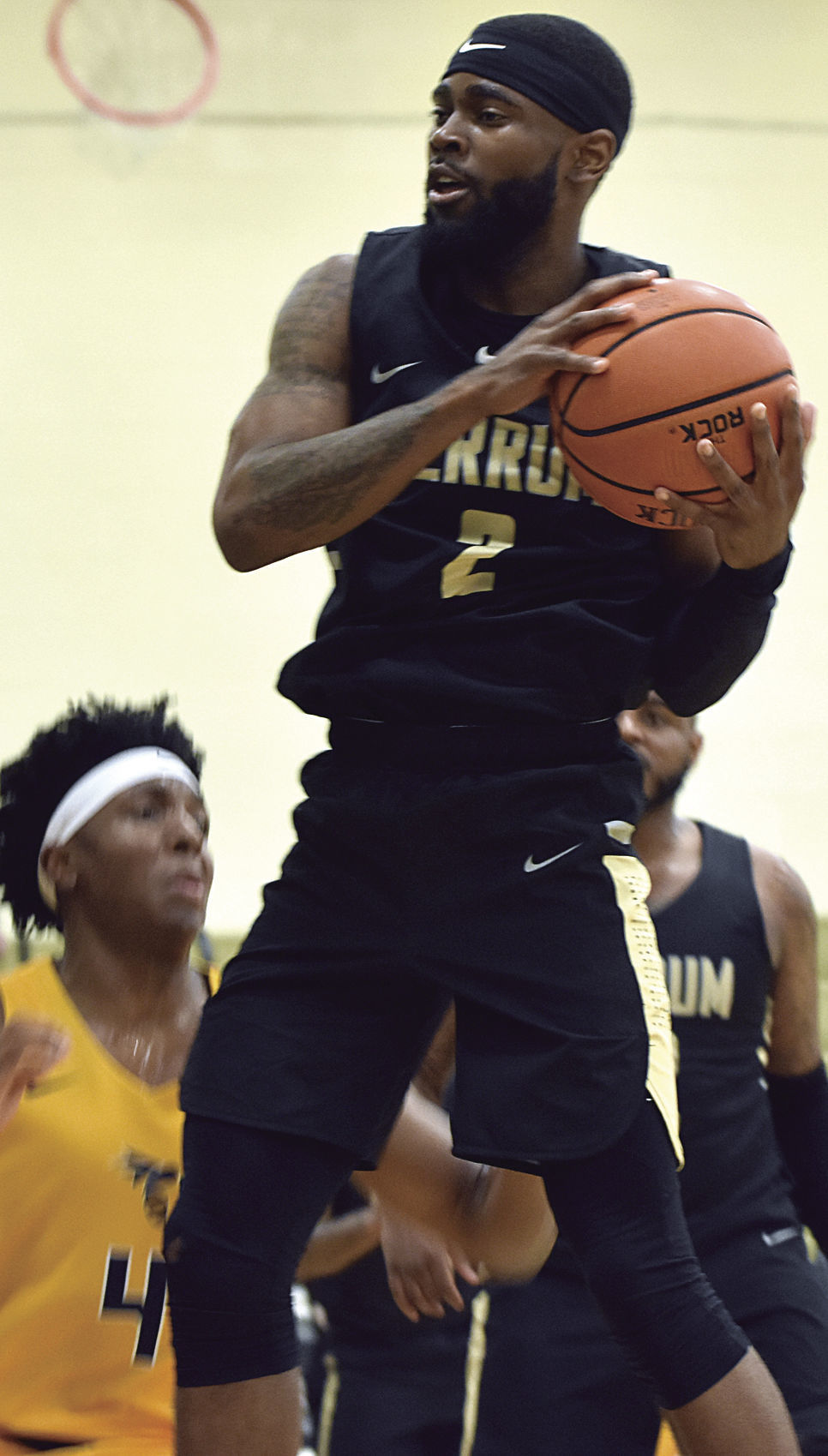 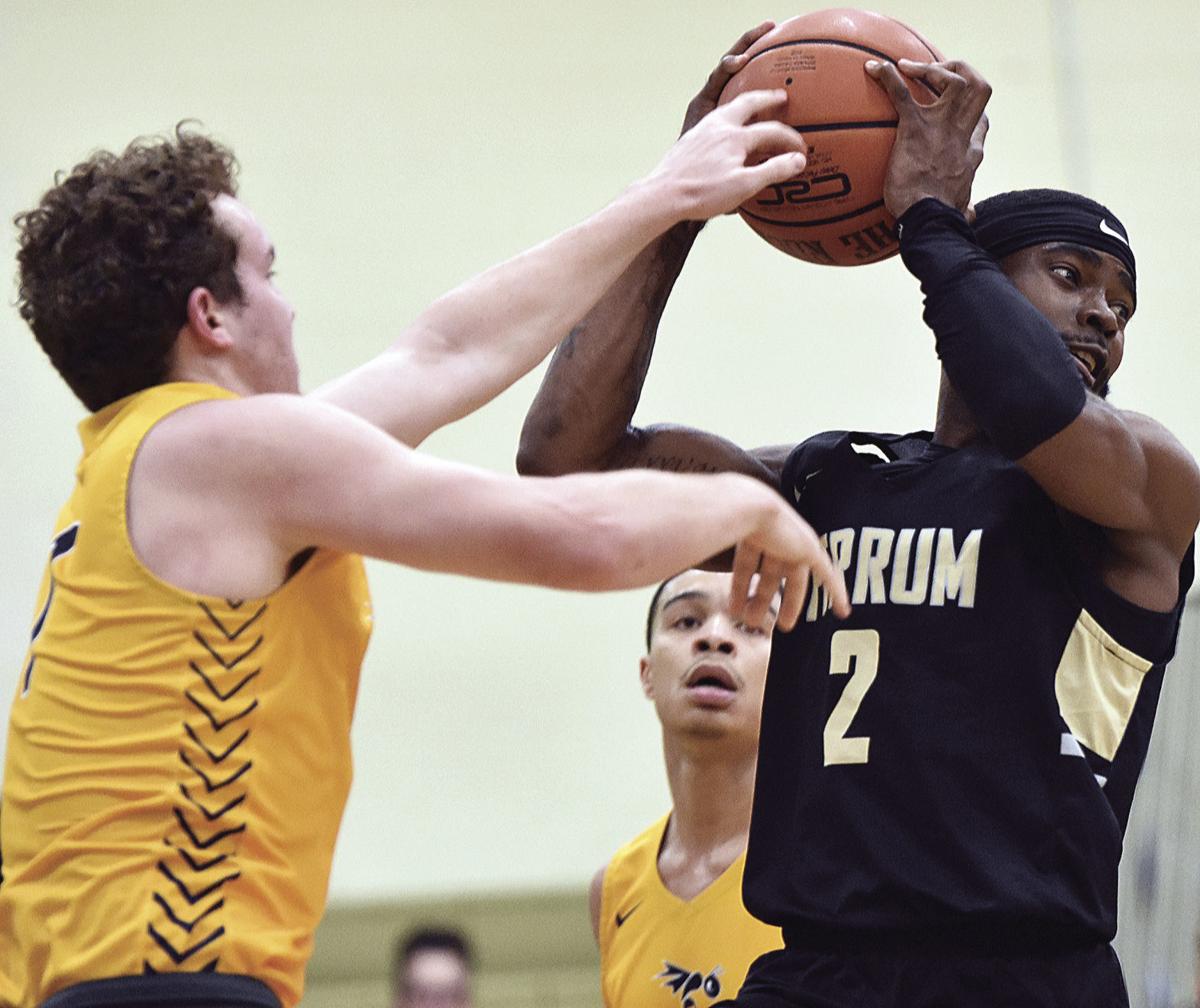 Ferrum College's Marcus Plair (right) makes a move to the basket while being checked by an Emory & Henry College defender. The Panthers and the Wasps face off Tuesday at William P. Swartz Gymnasium in the first round of the 2020 Old Dominion Athletic Conference (ODAC) men's basketball tournament.

Senior Rashad Reed fires a jumper from the 3-point arc for the Panthers. He has scored 1,258 points and ranks sixth in career scoring.

Tip off at William P. Swartz Gymnasium is 7 p.m.

Ferrum is 8-5 on its home floor this season.

Emory & Henry is in the 7-10 game for the second year in a row. Last year, the Wasps, seeded seventh, defeated No. 10 Eastern Mennonite University, 60-57, before falling to reigning conference champion Guilford (North Carolina) College, seeded second, 77-67, in the quarterfinals.

The first-round winners join the tournament's top six seeds in the quarterfinals Friday at the Salem Civic Center.

Ferrum is making its debut in the ODAC tournament; the Panthers did not qualify during their inaugural conference campaign last year.

A Panthers' victory would be their first in postseason play since a 77-71 triumph over Averett University in the quarterfinals of the 2014 USA South Athletic Conference tournament, which was contested at Maryville (Tennessee) College that year.

Ferrum saw its season end in the semifinals with a 75-68 loss to eventual conference runner-up Huntingdon (Alabama) College.

That contest proved to be the Panthers' last in USA South postseason play; their record in the league tournament was 9-26 dating to their 1989 debut.

During their USA South tenure, the Panthers captured one championship (1992) and claimed runner-up laurels once (2011).

Ironically, Ferrum and Emory & Henry have a postseason history.

Ferrum fell in the second round of the national tournament to Maryville in Tennessee.

Bill Pullen (Ferrum) and the late Bob Johnson (Emory & Henry) were at the helms of their clubs. Everett Foxx, Ferrum's career-leading scorer, was a senior that year for the Panthers.

The Panthers are 6-1 this month with the wins comprising a season-best, six-game winning streak, a run that came to an end in Saturday's loss to Washington and Lee University at Swartz Gym on Senior Day.

The Wasps are led by first-year head coach Ben Thompson and feature senior Colin Molden, the conference's leading scorer, with a 19.9 average.

Rashad Reed, a senior, leads the Panthers in scoring with a 16.9 average. James Smith Jr. ranks second on the team at 13.2 and Kajuan Madden-McAfee is third at 10.2.

Ferrum and the University of Lynchburg finished in a tie for sixth in the league standings and the Panthers and the Hornets split during the regular season with each team winning on its home floor.

Lynchburg received the sixth seed based on a second tiebreaker criteria in which it was  "awarded points based on results throughout a team's conference schedule,'' league officials said.

The Panthers were 2-2 against the bottom three seeds: 0-1 versus Hampden-Sydney, 1-1 versus Bridgewater and 1-0 versus Emory & Henry.

A Ferrum first-round win places the Panthers in the quarterfinals against Virginia Wesleyan,  Friday at 6 p.m.

The winner of the Hampden-Sydney-Bridgewater game faces Randolph-Macon in the quarterfinals Friday at 1 p.m.

Friday's other quarterfinal-round match-ups are Guilford versus Roanoke and  Washington and Lee versus Lynchburg.

The semifinals are Saturday and the championship game is Sunday.

The champion earns the ODAC's automatic berth in the NCAA Division III tournament.

Randolph-Macon enters the tournament ranked second nationally by d3hoops.com and second in the South Region by the Division III men's basketball committee.

The Yellow Jackets finished 15-1 in conference play for the second year in a row. The lone setback came on Saturday to Guilford, the league reigning champion and preseason title favorite.