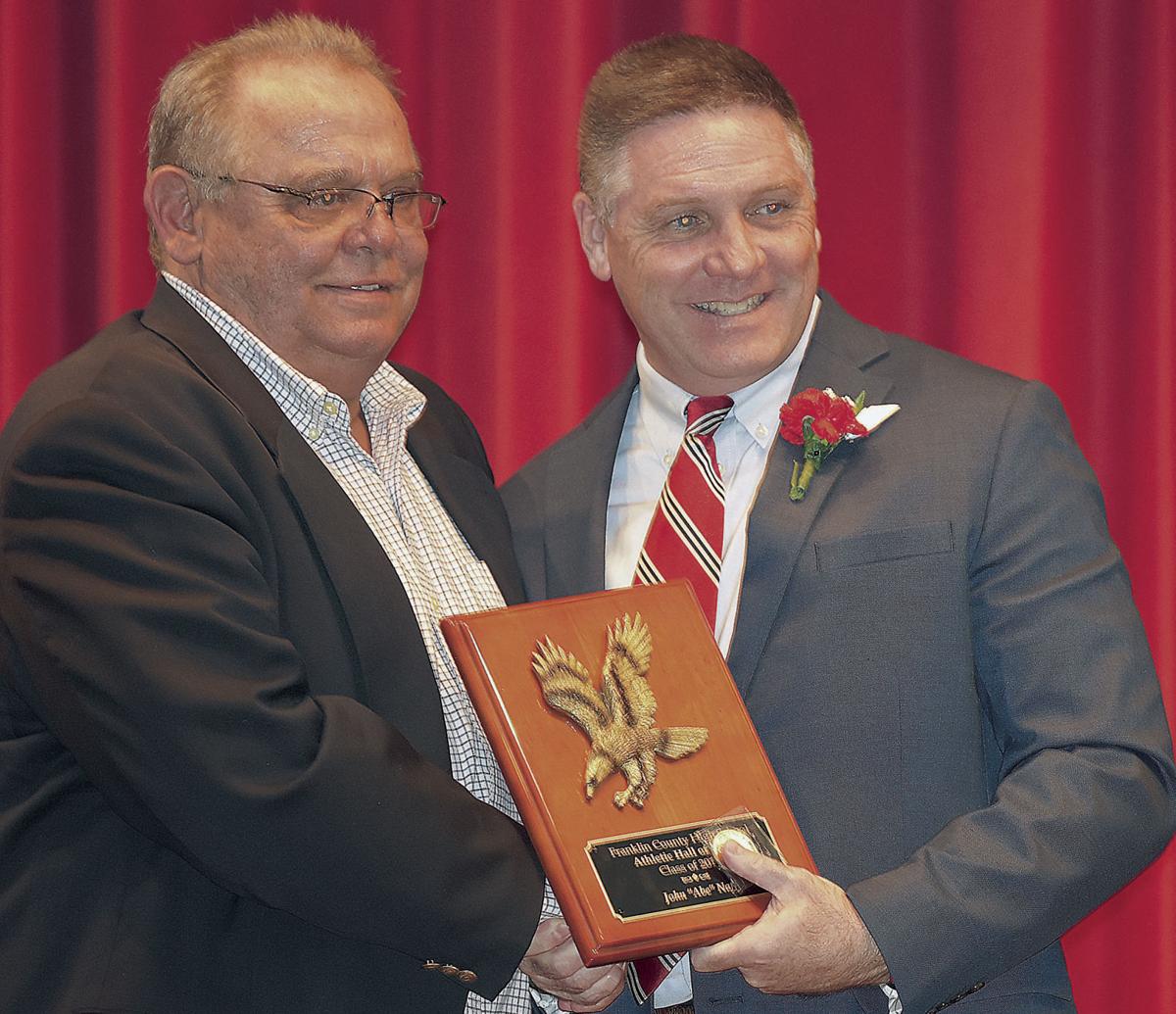 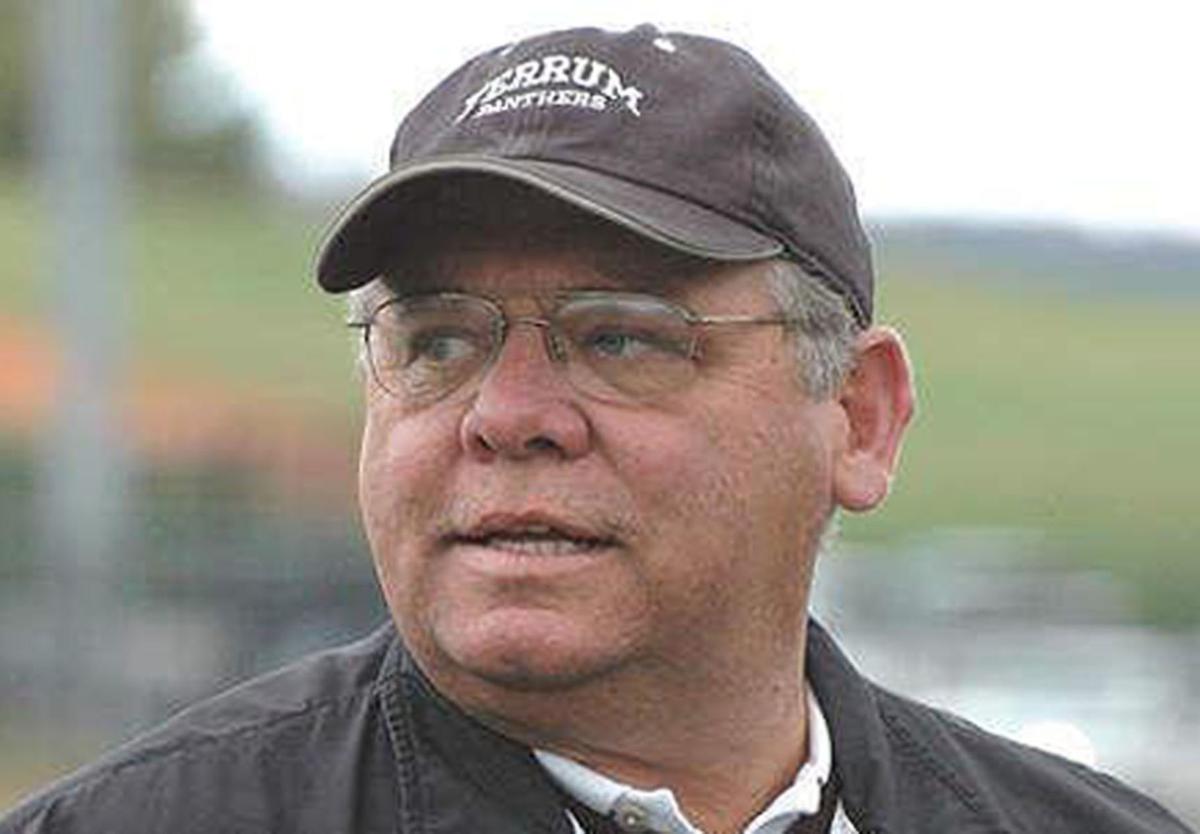 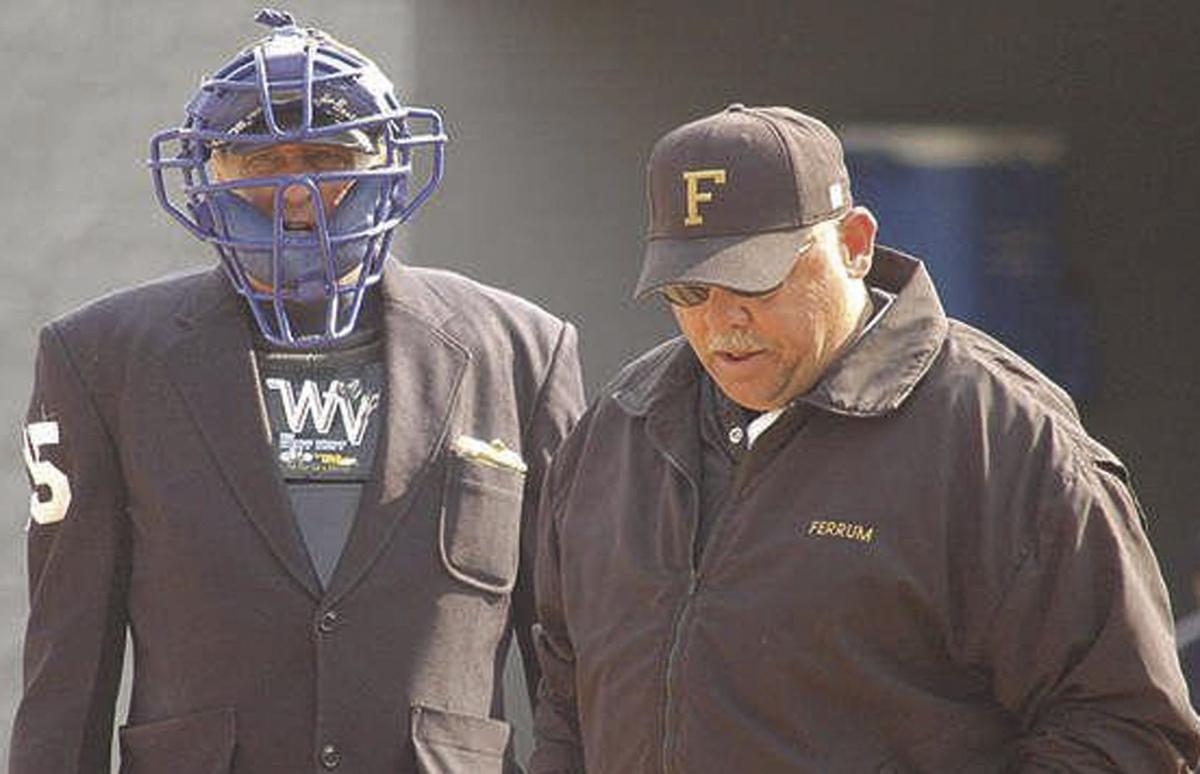 Abe Naff (right) talks to home plate umpire Wayne Shelton during his final regular-season home game as the skipper of the Panthers’ baseball team in 2007. 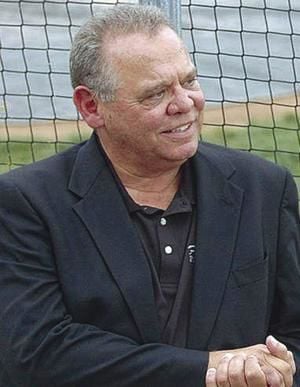 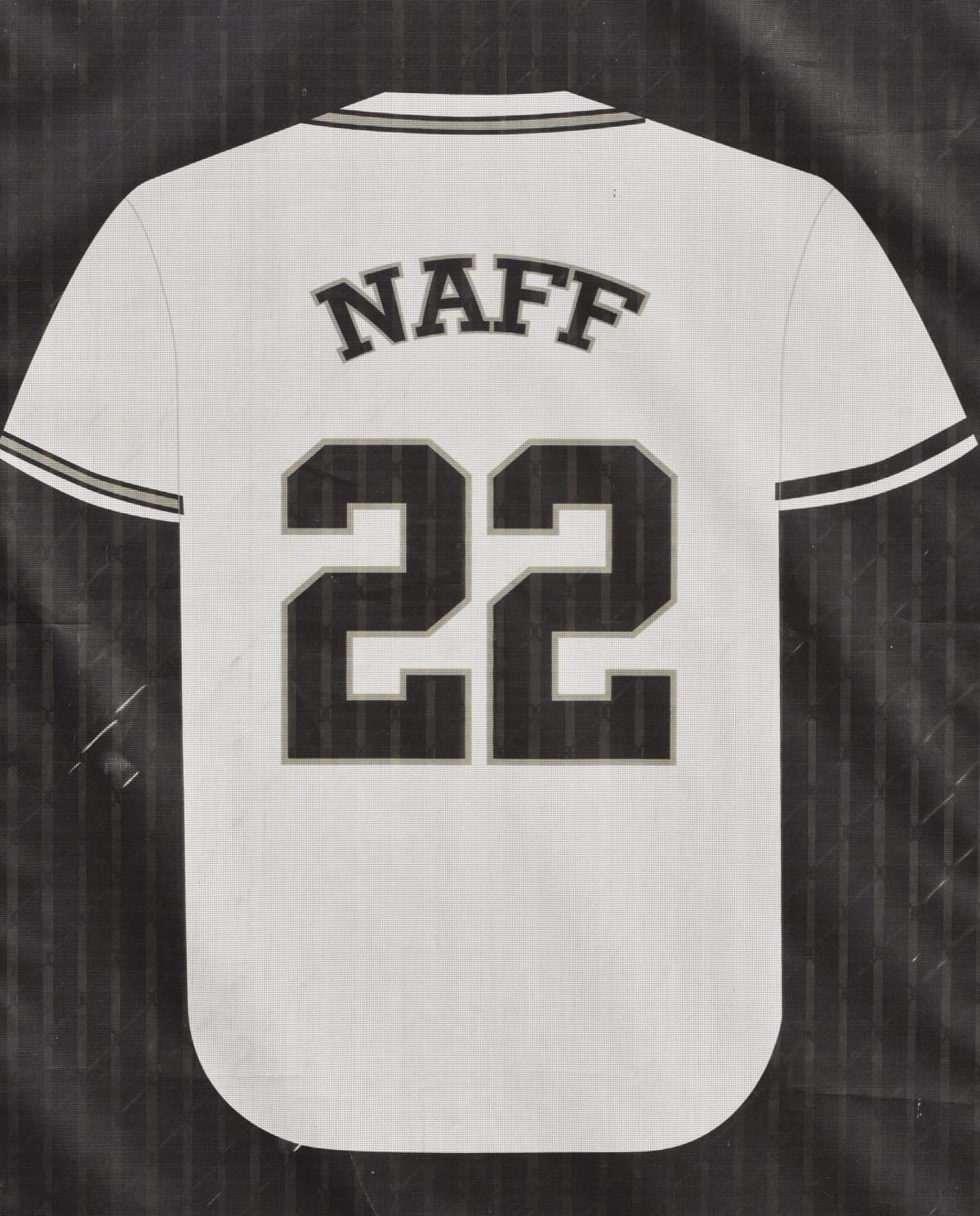 A replica of the jersey (No. 22) Abe Naff wore during his tenure as head baseball coach at Ferrum College hangs on the outfield fence at W.B. Adams Field.

Abe Naff (right) talks to home plate umpire Wayne Shelton during his final regular-season home game as the skipper of the Panthers’ baseball team in 2007.

FERRUM- Former Ferrum College Director of Athletics Abe Naff has filed a lawsuit against his former employer with regards to his firing in June of 2019.

Attorney John P. Fishwick Jr. confirmed in a press statement that the suit had been filed and added that “we will not be commenting beyond the press statement.’’

Earlier, Naff filed a complaint with the Equal Employment Opportunity Commission (EEOC) with regards to his termination.

Naff’s lawsuit demands a jury trial and seeks more than $9 million in damages.

Naff first worked at Ferrum as an assistant baseball coach and assistant football coach. He was hired as the head baseball coach in 1984 and served in that post until 2007. He was named Director of Athletics in 2004.

The suit states that Naff was “unjustly and unfairly terminated’’ from his post as Athletic Director on June 28, 2019; however, his dismissal was not confirmed by the college until mid-July when interim changes were made in athletic administration and the process for the hiring of a new Athletic Director was announced.

Ferrum hired current Director of Athletics John Sutyak in December and he began his tenure in the post in January.

“Ferrum has not seen the lawsuit and does not intend to try this case through the media,’’ Paine said.

During Naff’s employment, he was diagnosed with prostate cancer. The suit said the college was “aware of this diagnosis and Mr. Naff’s need for treatment.’’

The suit said Ferrum President David Johns and trustees Judd Mason and George Yancey met with Naff and informed him that he was being placed on paid administrative leave and that “his employment would be officially terminated in the near future.’’

Naff was first placed on paid administrative leave for 21 days — a period ending July 3 to “to consider certain terms of his severance,’’ the suit said, and Johns told Naff that “Ferrum College would not say anything other than Naff was out on leave…’’

It was reported on The Franklin News-Post website and in its printed edition in late June that Naff was taking “personnel time away from (the Athletic Director’s) position, but college officials would not provide a reason or reasons for the leave. They would not say whether Naff had stepped down, had been replaced, was still under contract or if there were plans for his return.

A list of questions concerning Naff’s employment status was submitted to Gary Holden, Ferrum’s sports information director, by a reporter from the News-Post by email. Those questions were forwarded to Paine, who later called the newspaper and took part in an interview that lasted more than four minutes.

During the interview, Paine said, “Abe is taking some time off like many of our faculty and staff do during the summer months. That’s all I can say and that’s all I’m willing to say.’’

When additional questions were asked, Paine repeated his statement and said, “If there is more to comment on, I will let you know…This is all that I can say now. I’m not going to comment on whether (Abe) is still the Director of Athletics or any (other) speculation other than to say that he’s taking some time off.’’

Paine said at the conclusion of the interview that he would be the only college official to make future comments on the matter. He said no one in the athletic department would comment. Holden and Paine had been quoted by the Roanoke Times regarding the situation.

The suit contends that statements made by college officials “conflicted’’ with what Johns had said to Naff and “further implied that Naff’s employment had been terminated for performance-based issues.’’

The suit contends that Naff “was devastated’’ by the loss of his job, which he considered “a large part of his identity.’’

That devastation led to deep depression and related health issues such as insomnia, stress and anxiety, the suit said.

The suit said Naff was forced to seek medical attention and mental health counseling last August, and that he endured “crying spells, anger, fear, stress, lack of pleasure and enjoyment in activities, worsened prostate problems and dramatic weight changes.’’ The suit said Naff had “thoughts of ending his own life…and that he was unable to function in his daily activities in any normal way.’’

In relation to his firing, Naff lost his health insurance and was owed vacation pay.

Naff contends in the suit that he was “terminated without warning,’’ that his termination was not in the “best interest of the college and its athletics department,’’and that statements made by agents of the college implicated his “integrity, credibility and truthfulness, unfitness to perform his duties…all of which prejudiced (him) in his profession and trade.’’

Naff is seeking $2 million in compensatory damages and $1 million in punitive damages on each of the counts of defamation, intentional infliction of emotional distress and negligent infliction of emotional distress. On the fourth count — breach of contract — he seeks a minimum of $4,000 plus interest. He also seeks other relief deemed “just and appropriate’’ by the court.

Naff, a graduate of Lynchburg College and a former baseball player for the Hornets, was hired in 1984 as Ferrum’s head baseball coach. He succeeded Rick Jones in the position.

Naff served as the Panthers’ baseball coach for 23 years and compiled a 643-236-3 career record.

The Panthers were a seven-time regional runner-up during Naff’s coaching tenure.

Naff replaced Ted Kinder as Director of Athletics in 2004 and was head baseball coach and athletic director until his retirement for baseball in 2007.

Naff is a 1977 graduate of Franklin County High School and was the starting catcher for the Eagles’ Group AAA state runner-up squad that spring.

Naff is a member of halls of fame at FCHS, Lynchburg and Ferrum and is enshrined in the Salem-Roanoke Baseball Hall of Fame and the USA South Athletic Conference Hall of Fame.

A replica of the jersey he wore while steering the Panthers hangs on the outfield fence at W.B. Adams Field along with those of former stars Billy Wagner, Eric Owens, Keith Mayhew and Patrick Daly, all of whom Naff coached.

FCHS’s baseball stadium at Benjamin Franklin Middle School, is named in honor of Naff’s father, the late Wesley W. Naff Jr., who was employed by the school system during his years of professional endeavor.