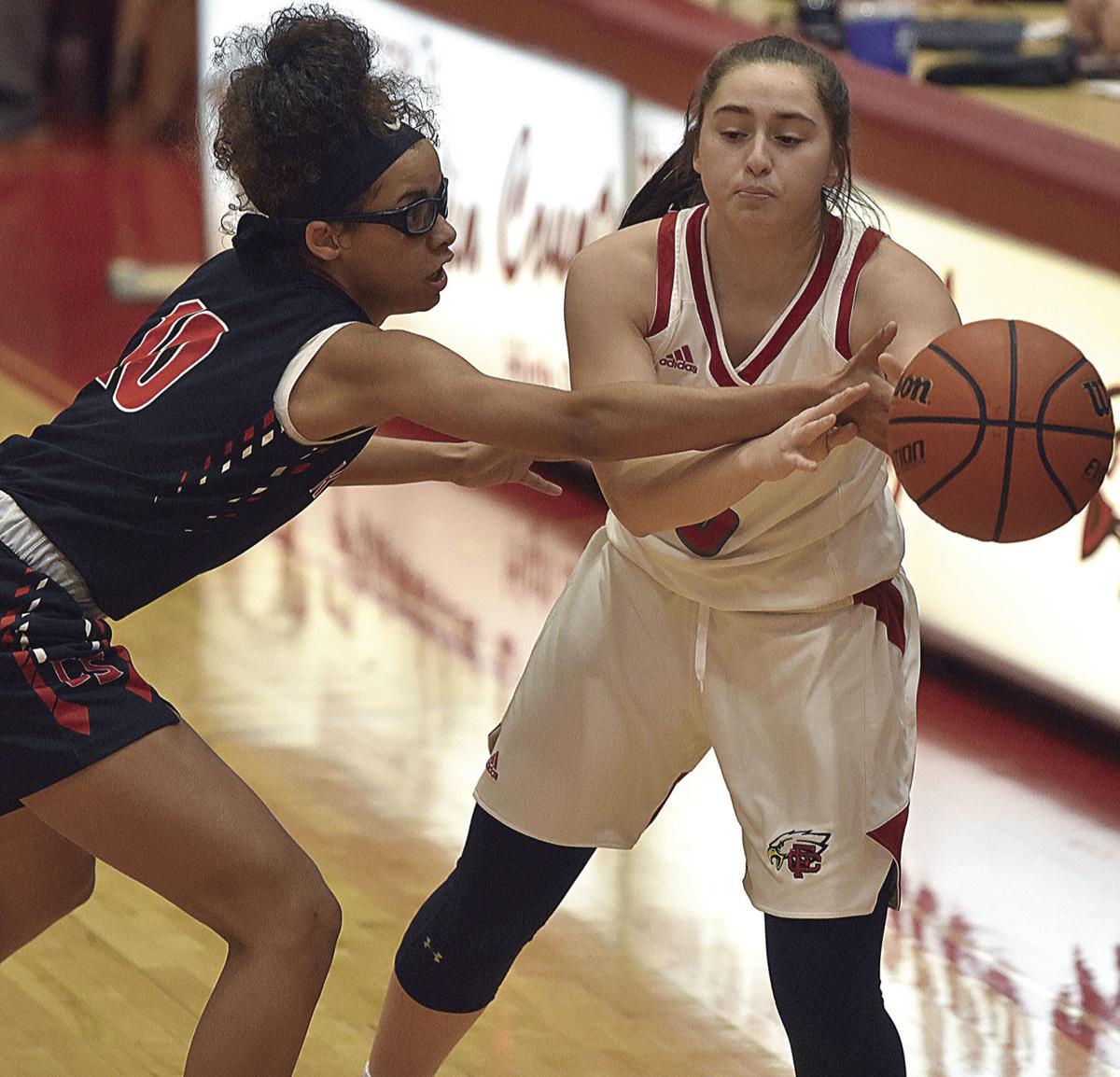 Brogan Dudley (right) tries to maintain control of the basketball as a Cave Spring defender attempts to force a turnover during a regular-season match-up between the Eagles and the Knights at Samuel M. Hawkins-Central Gymnasium. The game would be Dudley’s last for FCHS as she would sustain a season-ending knee injury in practice in the lead up to the Eagles’ next game, a win over Liberty Christian Academy in a post-holidays tournament played in Roanoke. Dudley has made a non-binding verbal commitment to continue her basketball career at Ferrum College. 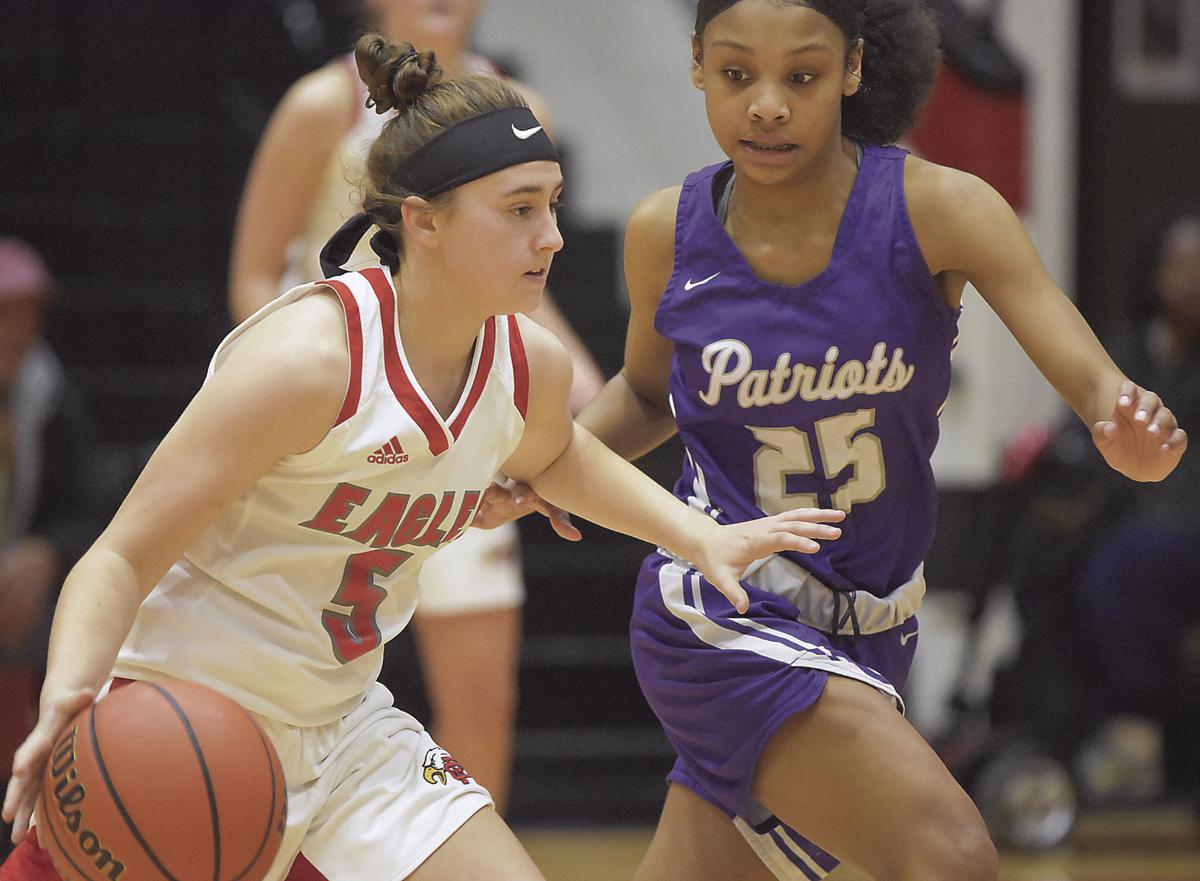 Brogan Dudley (right) tries to maintain control of the basketball as a Cave Spring defender attempts to force a turnover during a regular-season match-up between the Eagles and the Knights at Samuel M. Hawkins-Central Gymnasium. The game would be Dudley’s last for FCHS as she would sustain a season-ending knee injury in practice in the lead up to the Eagles’ next game, a win over Liberty Christian Academy in a post-holidays tournament played in Roanoke. Dudley has made a non-binding verbal commitment to continue her basketball career at Ferrum College.

Franklin County guard Brogan Dudley, who missed more than half of her senior campaign after sustaining a knee injury in practice, has made a non-binding, verbal commitment to continue her career at Ferrum College.

Dudley played two years of varsity basketball for the Eagles, who finished 15-10 last season under the direction of first-year head coach Le’Bryan Patterson, a former football player at Ferrum.

“Brogan has the ‘Go’ in a player that every coach looks for. She is always accountable to everything off the court and it translates to her playing attributes,’’ Patterson said.

“Brogan will lay everything on the line for her team. She is the hustle player that never gets tired. Brogan is very aggressive on defense, diving on the floor for loose balls, and a floor general on offense.’’ Patterson said.

Dudley, one of three senior captains on this past season’s club, suffered her injury in practice with FCHS preparing to play in a post-holidays tournament staged by Cave Spring.

“I am extremely excited about Brogan’s choice to come to Ferrum and to have her as part of our basketball program,’’ Ferrum head coach Bryan Harvey said.

“I have known Brogan for a long time as she used to attend our summer basketball camps. She has an infectious personality that makes you want to be around her,’’ Harvey said.

“All of Brogan’s high school coaches speak highly of her. They praise her work ethic and talk about what a great teammate she is. Those are qualities we look for in all of our players,’’ Harvey said.

“She is the type of person that fits perfectly with the core values of our program. I’m excited to start working with her,’’ Harvey said.

FCHS has a footprint on Ferrum’s program during Harvey’s tenure that began with the 2005-06 season. Former Eagles star Zarkia Mattox is the program’s career-leading scorer; from 2015-18, she netted 1,885 points.

Also former FCHS standouts Shea Smith, Borerika Burwell and Amber Potter played for Harvey. Smith and Burwell were seniors on the Panthers’ 2013-14 squad that advanced to the round of 32 of the NCAA Division III women’s basketball tournament. That squad achieved the Panthers’ first national postseason victory when they bested Capital (Ohio) University.

Smith, the Most Valuable Player (MVP) of the USA South Athletic Conference’s postseason tournament that year, finished her career with 1,107 points.

Dudley said, “Meeting Brogan for the first time and I said, ‘Do you believe this team can have a winning season,’ and she said, ‘We better.’ That’s the kind of player she is — confident, always has high expectations for herself, and high standards for her team,’’ Patterson said.

“Brogan will be truly missed, but never forgotten; she was the leader, heart and soul of our team,’’ Patterson said.

Ferrum is coming off back-to-back single win seasons. The Panthers begin their third year of competition in the Old Dominion Athletic Conference (ODAC) in 2020-21.

Garrett Garman, who starred in outdoor track for four years, indoor track for two and football for three, has signed with Coastal Carolina (South Carolina) to continue his track and field career.

Garman’s plans are to become a decathlete (10 events).

“I have always had a passion for track and field and I am excited to pursue it at the Division I level,’’ Garman said.

“I would like to thank my teammates, coaches, parents and everyone who have supported me throughout my career in Franklin County and getting me to this point,’’ Garman said. “I could not have done it without the help of Coach (Chris) Renick, Coach (Chris) Eden, Ernie White and my trainer, Angela White,’’ Garman said.

As a freshman, Garman was part of a FCHS relay quartet that finished second in the Class 6 state meet.

“I would just like to thank Garrett for all the years of hard work and dedication to the FCHS track and field program,’’ Renick said.

“It has been a pleasure watching him grow into a young adult in track and field, football and life. I wish him the best of luck at Coastal Carolina,’’ Renick said.

Garman said he plans to major in marine biology.

Crawford, the daughter of Ferrum head athletic trainer Seth Crawford, said she plans to study elementary education. Both of her parents are Ferrum alumni.

All of the schools listed compete in the ODAC.