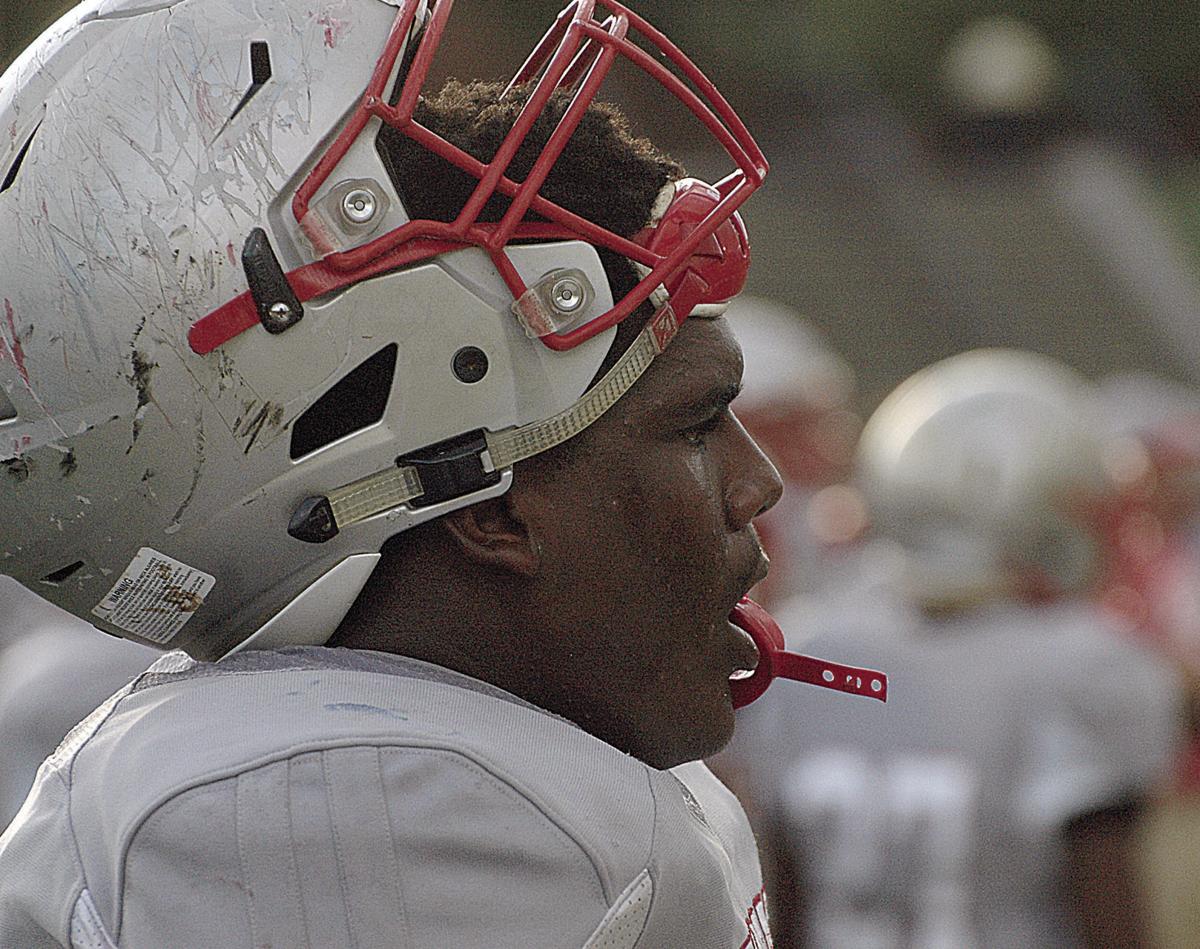 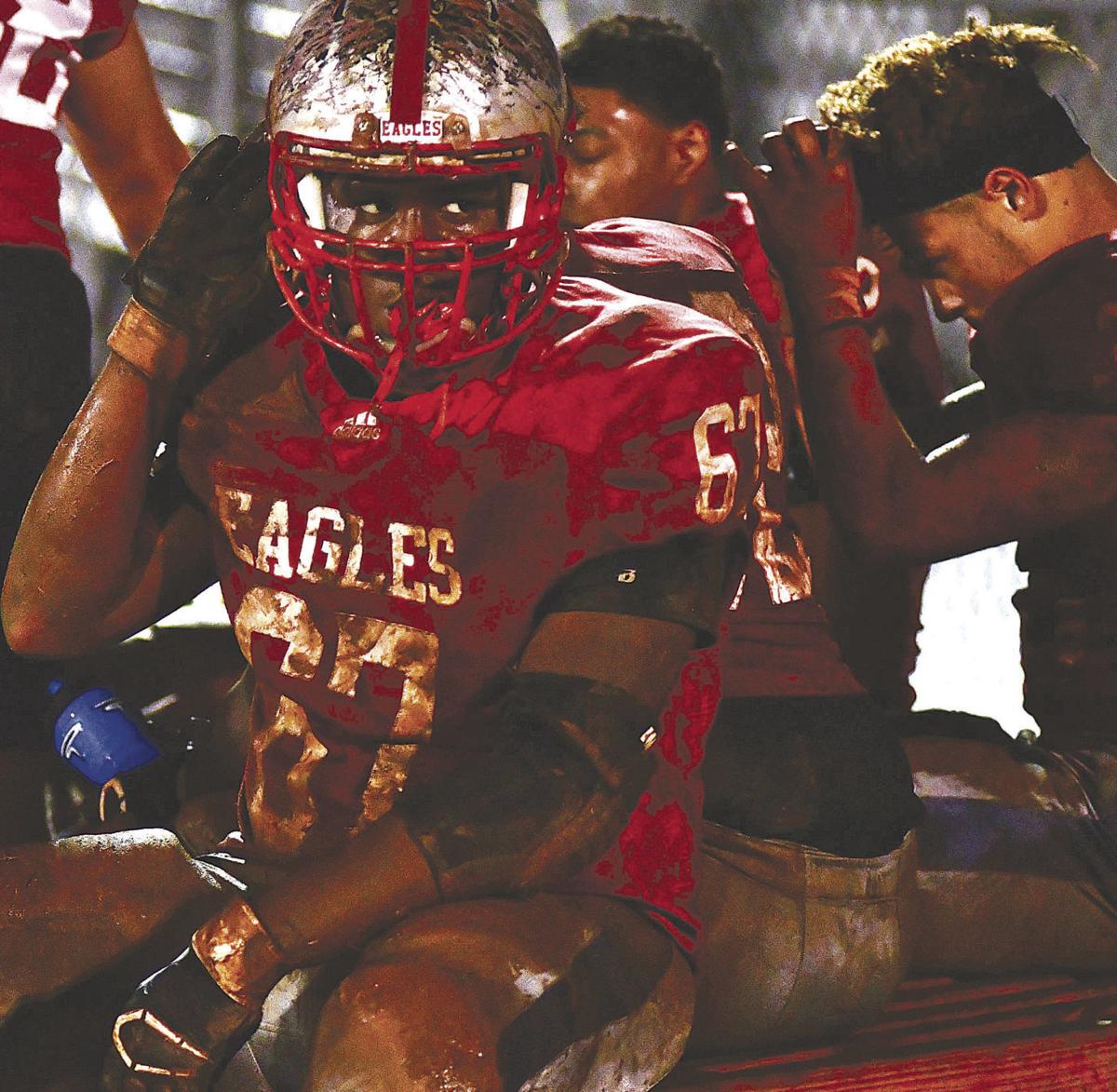 William Hairston is caked in mud during last year’s Piedmont District battle against Tunstall in the final week of regular-season play.

William Hairston is caked in mud during last year’s Piedmont District battle against Tunstall in the final week of regular-season play.

Franklin County’s 2018 football game against Tunstall will always be memorable for defensive lineman William Hairston for the shut-out victory the Eagles achieved and for his appearance during and after the triumph.

Hairston battled in the trenches all night long. When he was able to depart the field, his uniform was caked in mud.

Because of torrential rains, the C.I. (Cy) Dillon Stadium-Fred M. Brown Memorial Field’s turf was quagmire at best, a disaster at worse. The dirt and the grime proved to be a challenge for whichever brand of detergent the Eagles program opted to employ when washing their jerseys.

“I was lucky that I didn’t have to clean that uniform. It had to be tough getting those mud stains out,’’ Hairston said following a Tuesday afternoon practice.

“The Tunstall game was a physical one…I felt dirty after the game with all that dried mud on my legs. …I had to take my shoes off at the door before my mother would let me in the house,’’ Hairston said. “The mud was through my face mask and on my face. I got it in my hair too. I don’t know how,’’

Those jerseys did have one game left in them — a 14-0 victory over Clover Hill in the quarterfinals of the Class 6 Region B playoffs. That game too was played in less than ideal conditions.

Now, the jerseys are packed away in storage. The Eagles have new uniforms this year, albeit Hairston’s familiar number 67 is still the same.

Tonight when Hairston enters the stadium for the first home game of his senior year, the field is expected to be in pristine shape compared to the night of FCHS’s regular-season finale — its final game against a football competitor from the Piedmont District.

“I think we play our best games in the mud, that Franklin County mud. I think it’s an advantage for us,’’ Hairston said.

Hairston has turned in stellar efforts in the Eagles’ first two games, a 28-0 victory over Liberty-Bedford and a 27-21 loss to long-time gridiron heavyweight Salem in game that was even with seven minutes remaining in regulation.

Hairston collected five tackles, four of which were solo stops, a quarterback sack and a tackle for loss. His performance drew noteworthy praise from first year Salem head coach Don Holter, an Eagles’ assistant coach during Billy Miles’ tenure as the program’s caretaker.

“(Hairston) plays the game the way it’s supposed to be played,’’ Holter said.

As a senior, Hairston said he knows all too well that this year is his last high-school go-round.

The end of Hairston’s career, either in November or December, brings a halt to his family’s two generation run in the program.

“Football is in my blood.’’

“Charles was No. 77. Andrew played for Coach Miles too and Coach Boyd… Nick was Coach Jones,’’ Hairston said.

Nick Hairston was the family’s football black sheep; dad, Charles, Andrew and William are lineman, while Nick patrolled the secondary.

“(Nick) was the only one who didn’t play on the line; he’s a different breed. He always had a motor. (In the summers), it would be hot, outside but he would always be cutting the grass. I’d say to him, ‘Didn’t you cut it yesterday.’ He was always running or something,’’ Hairston said.

Truth be told, Hairston, for his size, isn’t bad when it comes to running those late-practice gassers.

“I just try to push my team, I try to motivate them. You’ve got to run them as a team and you can’t blame things on one person. You’ve got to suck it up as team,’’ Hairston said.

Hairston said the loss to Salem is in the proverbial rear-view mirror. E.C. Glass, tonight’s opponent, has the Eagles’ undivided attention.

“The loss was heart breaking for me because I’m a senior and it’s the last time I’ll see the Salem Spartans. It’s kind of sad,’’ Hairston said.

“But, I’m still proud of (my teammates). We stepped up in the fourth quarter and made big plays when big plays needed to be made,’’ Hairston said. “We’ve just got to shake off (the loss) and get to the next game because the next game’s not waiting on us.

E.C. Glass won 11 games last year; the Hilltoppers’ campaign came to a close with a loss to Blacksburg in a Class 4 regional final.

The Hilltoppers are the third of eight 2018 playoff teams that the Eagles will; challenge this season.

And the game is on Friday the 13th. It marks the 22nd time in program history that the Eagles have played on that bewitching date.

The Eagles had never defeated the Hilltoppers in football until Miles took over the reins of the program.

“E.C. Glass is a tough, physical team and they have a lot of speed. But we have speed too,’’ Hairston said, “and we’re physical. I think we’ll give them a good fight.’’