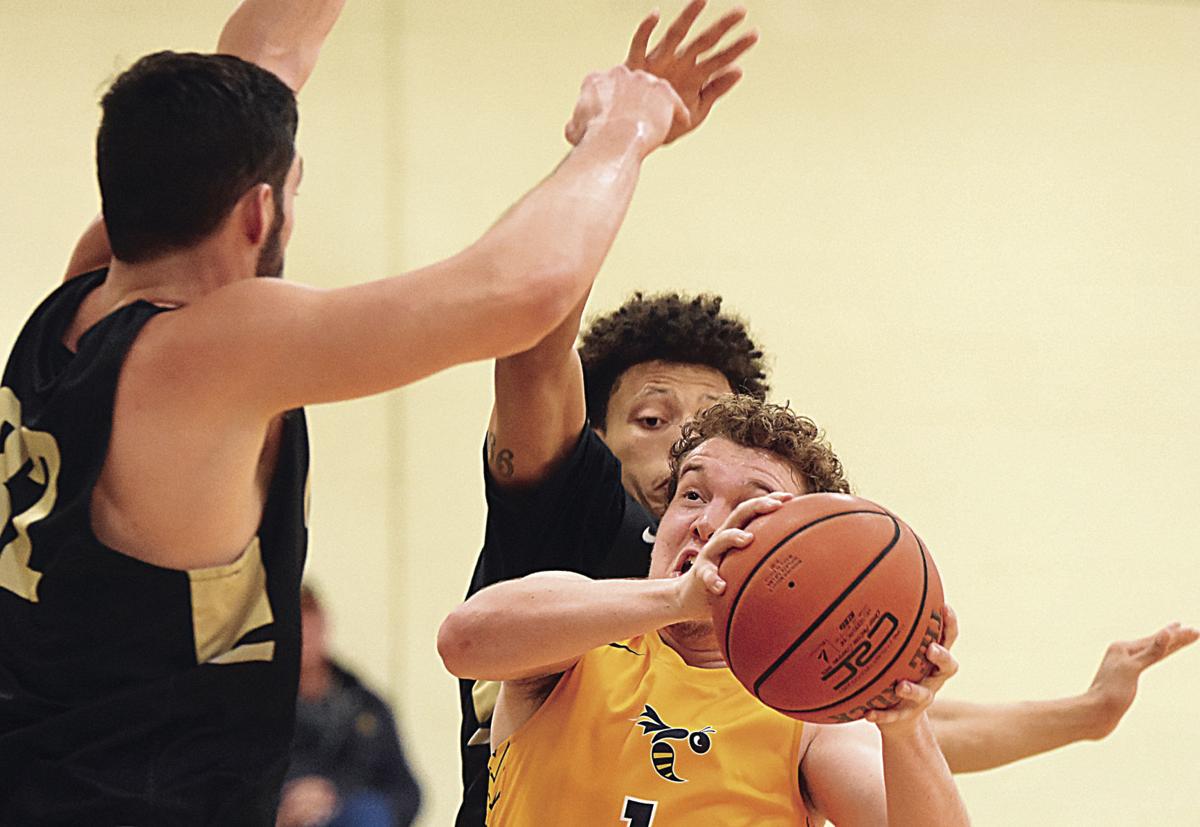 Ferrum College’s Nick Helton (front) and Kajuan Madden-McAfee (back) try to stop Emory & Henry College’s Colin Molden’s pursuit to the basket during the second half of Wednesday’s 98-74 win by the Panthers over the Wasps at William P. Swartz Gymnasium. 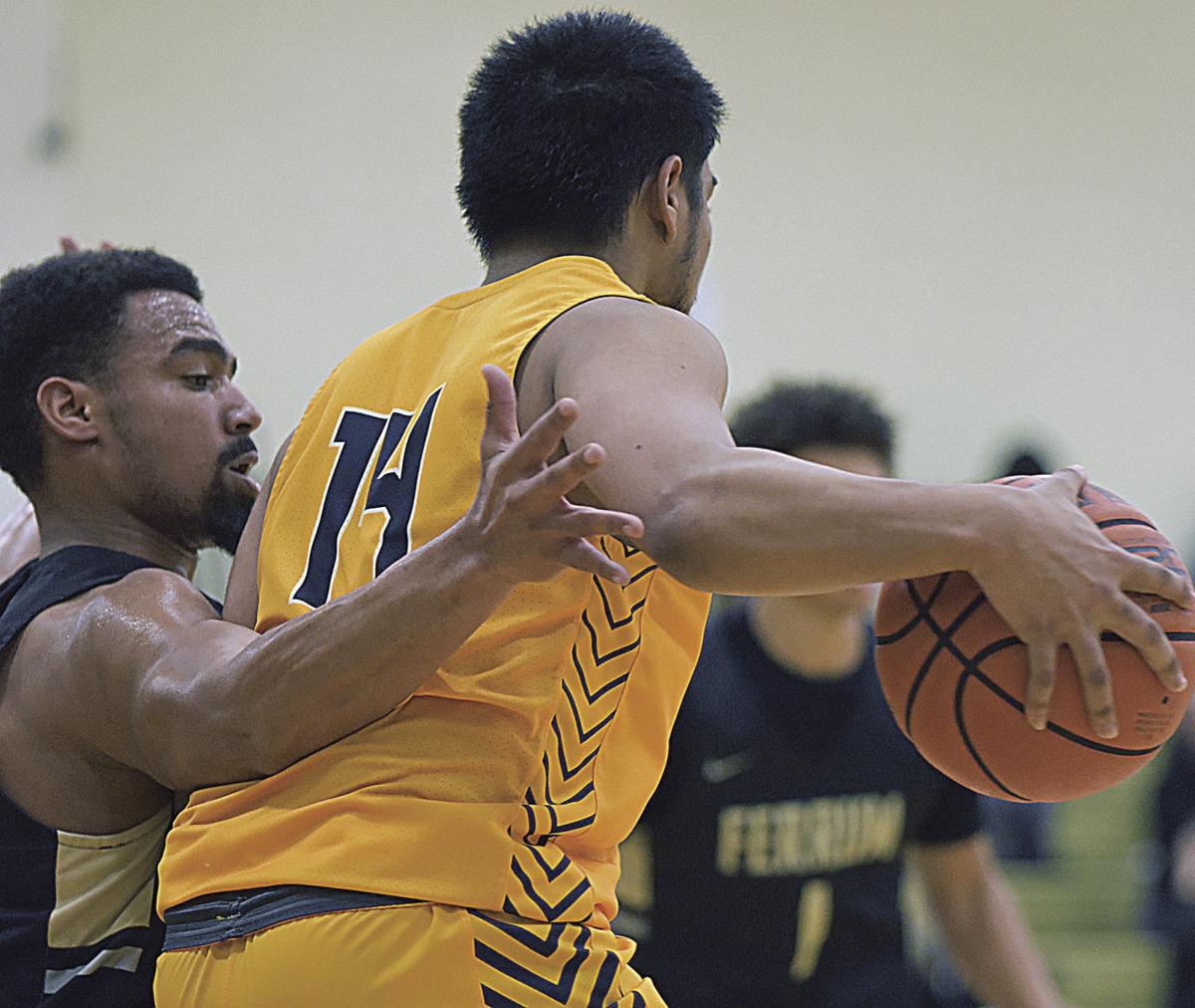 Ferrum College’s Nick Helton (front) and Kajuan Madden-McAfee (back) try to stop Emory & Henry College’s Colin Molden’s pursuit to the basket during the second half of Wednesday’s 98-74 win by the Panthers over the Wasps at William P. Swartz Gymnasium.

The Panthers’ starting five took the William P. Swartz Gymnasium floor in near darkness, only to shine plenty of light on their scoring prowess in a 98-74 rout of Old Dominion Athletic Conference (ODAC) rival Emory & Henry College Wednesday.

The win enables the Panthers (7-6 in the ODAC, 12-10 overall) to better the .500 mark in conference play and move two games above basketball par overall with three regular-season games to play, all in conference play with two of those on the road.

Ferrum has yet to lose in February and its four-game winning streak is the team’s best since the 2015-16 campaign when it achieved triumphant runs of four and five games.

The Panthers tallied 59 points in the second half and their 98 points is a season-best output.

A corps of reserves made three attempts to reach triple digits, but it failed to convert. Rather than taking a shot on its final possession of the game, Ferrum opted to let time expire.

The Panthers’ advantage surpassed the 30-point mark for the first time, 83-52, with 5:17 remaining. It reached a high of 36 on three occasions and was not reduced into the 20s until the Wasps (2-12 in the ODAC, 5-18 overall) tallied the game’s last seven points on a 3-point field goal and a four-point play.

Ten of the 15 players who saw action for the Panthers contributed points to the victory. Fourteen players took at least one shot.

The Wasps dressed only nine players and played them all. Eight scored, three of whom were in double figures accounting for 49 points, while five others combined for 25.

The Wasps’ Colin Molden, the ODAC’s leading scorer was 9 of 18 from the field for a game-best 23 points. His effort enabled him to become a 1,000-point scorer for his career.

Molden was one rebound (he claimed nine) and three assists (he passed out seven) shy of a triple double.

Emory & Henry has surrendered more than 90 points in each of its last two games, both conference losses, and 11 times this season.

The Panthers won the rebounding battle 56-33 and held a 19-6 edge on the offensive glass.

“I like that. Nineteen offensive rebounds, you’ve got to love that,’’ Sanborn said.

Ferrum led by 12 points, 39-27, at intermission, and rather than having to fight off early, second-half comebacks by the opposition, as were the cases in recent Swartz conference wins over Bridgewater College and Shenandoah University, the Panthers maintained their lead and extended it — at the first time out of the half (at 14:22) , the difference was 15 points, 54-39.

“We talked about that (at halftime), then they came out and hit a three to start the half and I thought, ‘Not again,’ “ Sanborn said.

“We did some good things, and they don’t have a lot of depth,’’ Sanborn said.

Ferrum held a 19 -point, 64-45, when the Panthers took a time out at 11:08. A run of 10 points by the Panthers featured a Rashad Reed back-door flush and a deuce and a basket by Nick Helton.

The difference was 21 points, 73-52, when the Panthers produced a 15-0 surge, one that featured three consecutive treys, the last two by Kajuan Madden-McAfee and a dunk by Madden-McAfee, whose night ended with the slam.

Ferrum scored eight of the game’s first 10 points and led 11-4 at one point before Emory & Henry crafted a 10-0 run to erase the deficit.

Three of Ferrum’s last four points of the half came from the free-throw line.

Only three Wasps players logged fewer than 20 minutes, but only Molden saw more than 30 minutes of action.

Dylan Catron finished with 15 points for the Wasps and Micah Banks scored 11.

Madden-McAfee’s double-double for 17 points and 12 rebounds guided the Panthers. He was 6 of 10 from the field and nine of his rebounds were on the defensive end of the floor.

Reed, the only Ferrum performer to play more than 30 minutes, was 7 of 13 from the field for 16 points. He needs four points to reach the 1,200-point mark in career scoring.

Also, Carrington Young, who was 6 of 8 from the field, netted 13 points, Kalip Jones tallied 12, Helton scored 11 and Marcus Plair finished with 10.

The contest was the Panthers’ penultimate regular-season home game.

They play Eastern Mennonite University Saturday and Randolph College Wednesday before finishing at Swartz Gym against Washington and Lee University on Feb. 22.