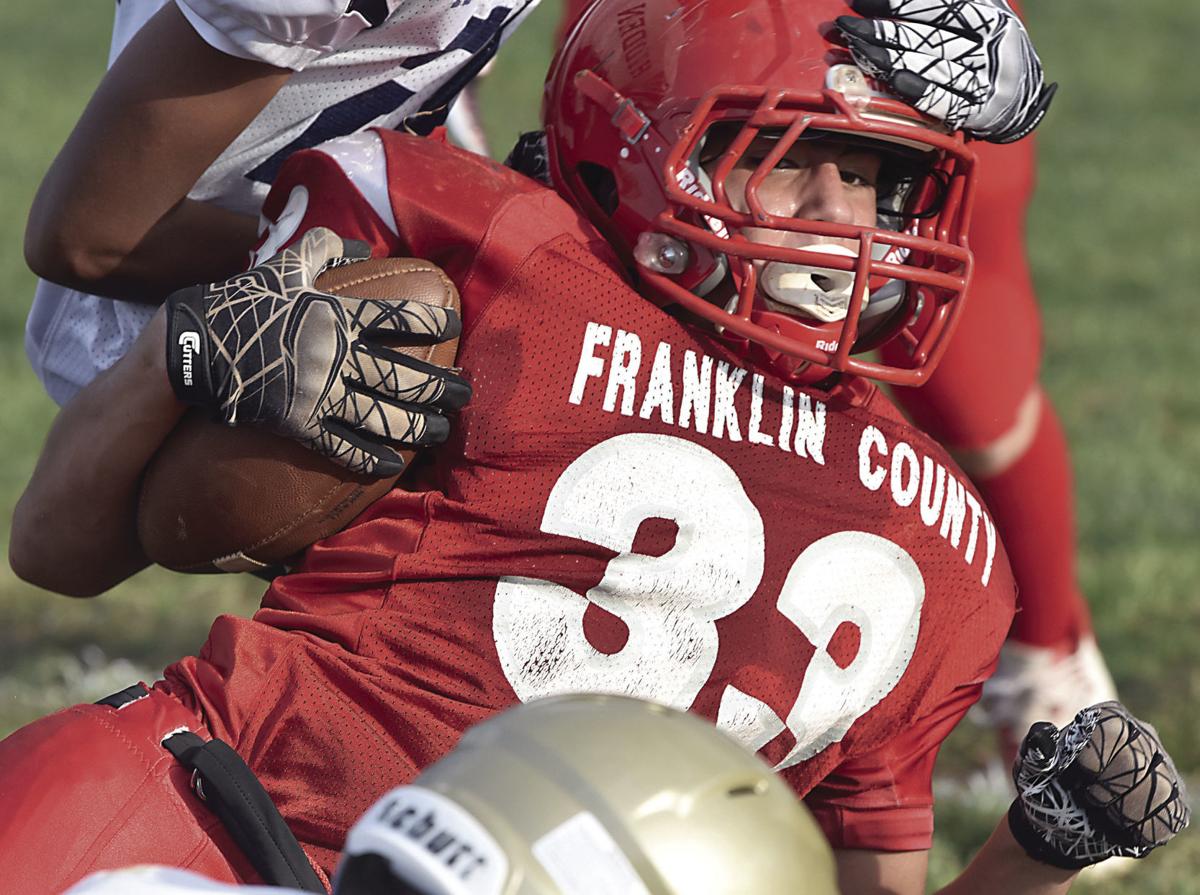 Benjamin Franklin Middle School’s Mekih Edwards (No. 33) is taken to the ground Hidden Valley defenders after a significant gain of yardage during the first half of last week’s 54-0 Roanoke Valley Middle School League football game. 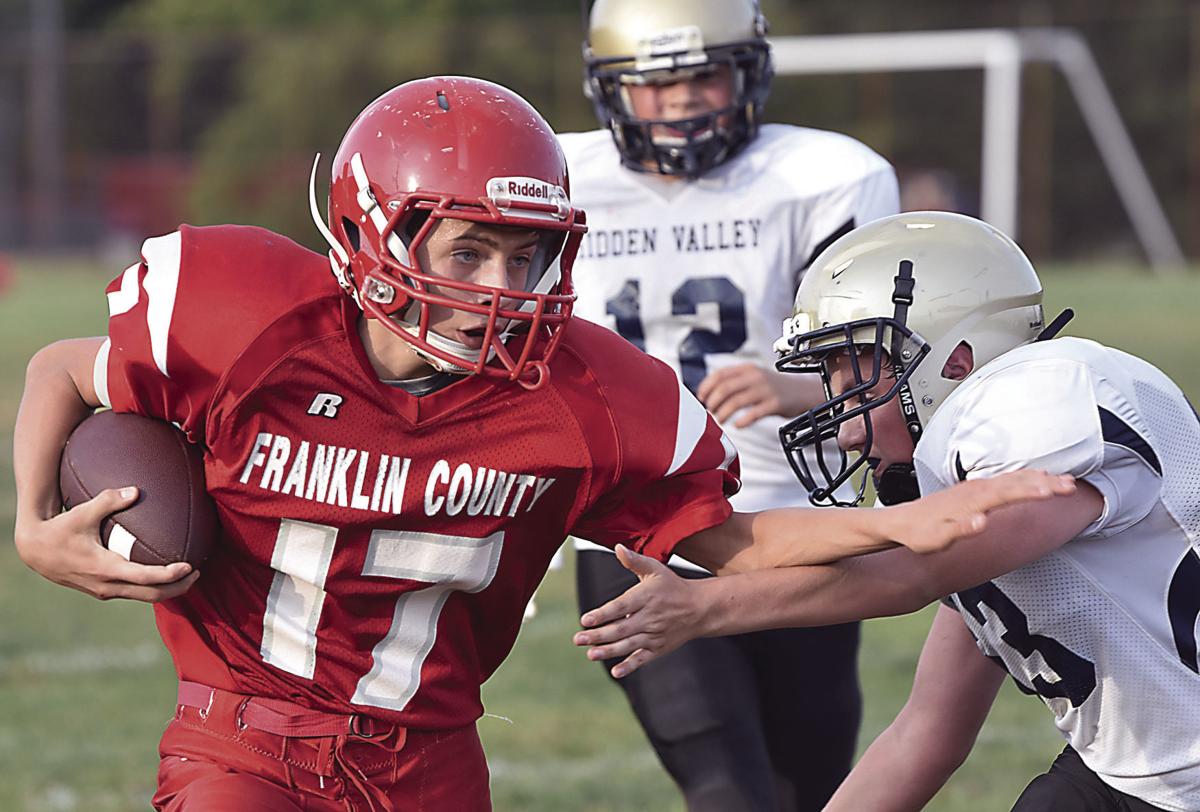 After intercepting a pass just before intermission, Benjamin Franklin Middle School’s Elijah Byers (No. 17) fights off a Hidden Valley foes as he races to the end zone for his team’s final touchdown.

Benjamin Franklin Middle School’s Mekih Edwards (No. 33) is taken to the ground Hidden Valley defenders after a significant gain of yardage during the first half of last week’s 54-0 Roanoke Valley Middle School League football game.

After intercepting a pass just before intermission, Benjamin Franklin Middle School’s Elijah Byers (No. 17) fights off a Hidden Valley foes as he races to the end zone for his team’s final touchdown.

The Eagles (3-2 in the Roanoke Valley Middle School League, 3-2 overall) employed their first-string players for one series after intermission. The second half was played under running time as mandated by Virginia High School League (VHSL) rules.

BFMS’s victory is its second in a row.

“Hard work is paying off for us. We had a great week of practice and were prepared to play smart football and eliminate our mistakes,’’ BFMS head coach Chris Renick said.

“It was a great, total team effort from the beginning to the end,’’ Renick said of the Eagles’ shut-out triumph. “A shutout at any level is a great accomplishment.

“Our players had a different side to them coming into the week (of the game). They wanted to get better and play as a team. We eliminated the penalties and turnovers and played smart football,’’ Renick said.

BFMS scored on its first play from scrimmage when Zak McDaniel sprinted 65 yards for a touchdown.

After forcing a three-plays-and-out, courtesy of the defensive efforts of Maurice Simon, Hayden Leftwich and Cody Hamilton, and a Hidden Valley punt, the Eagles would produce a two-play scoring drive.

That second play was a 55-yard TD dash by Adrian Preston. A successful, 2-point conversion hook-up between Preston and quarterback Haven Mullins pushed the spread to 14-0.

BFMS’s next defensive series featured a Preston sack, a tipped pass by Leftwich and a Gavin Hall interception that was returned for a TD. Preston’s pressure on Hidden Valley’s quarterback caused the pass to be picked off.

Then, a Mullins to Preston 2-point conversion pass made the count 22-0.

Next, the Eagles’ defense forced a punt and their offense cashed in once it regained possession. Preston and McDaniel accounted for 70 rushing yards on three plays to advance the ball to the 7 yard line.

Preston finished the drive with a TD run and he caught a 2-point pass from Mullins to produce a 30-0 lead.

Then, BFMS would execute a pair of on-side kicks; they would recover both and convert both into TDs.

A Mullins to Dayevon Shain pass play covering 35 yards ignited the first scoring march. The Eagles rode Mullins’ arm two more times as he completed a pair of tosses to Preston for 20 and 5 yards. Then, Mullins found the end zone on a one-yard keeper.

Byers stopped Hidden Valley’s next drive with an interception, one that he returned 40 yards. The Eagles would advance the ball to the Titans 15, but they were forced to surrender possession on downs.

Byers; however. would pick of a second Titans pass and return it for a 35-yard TD. A Mullins to Shain 2-point conversion pass finished the scoring.

“Several players are stepping up and are wanting to become leaders and it showed in their play,’’ Renick said.

“I want to thank my assistant coaches — Ricky Young, Donnie Sink, Travis Johnson and Cullen King — for their dedication to this team and their hard work. I couldn’t do it without them day in and day out,’’ Renick said.