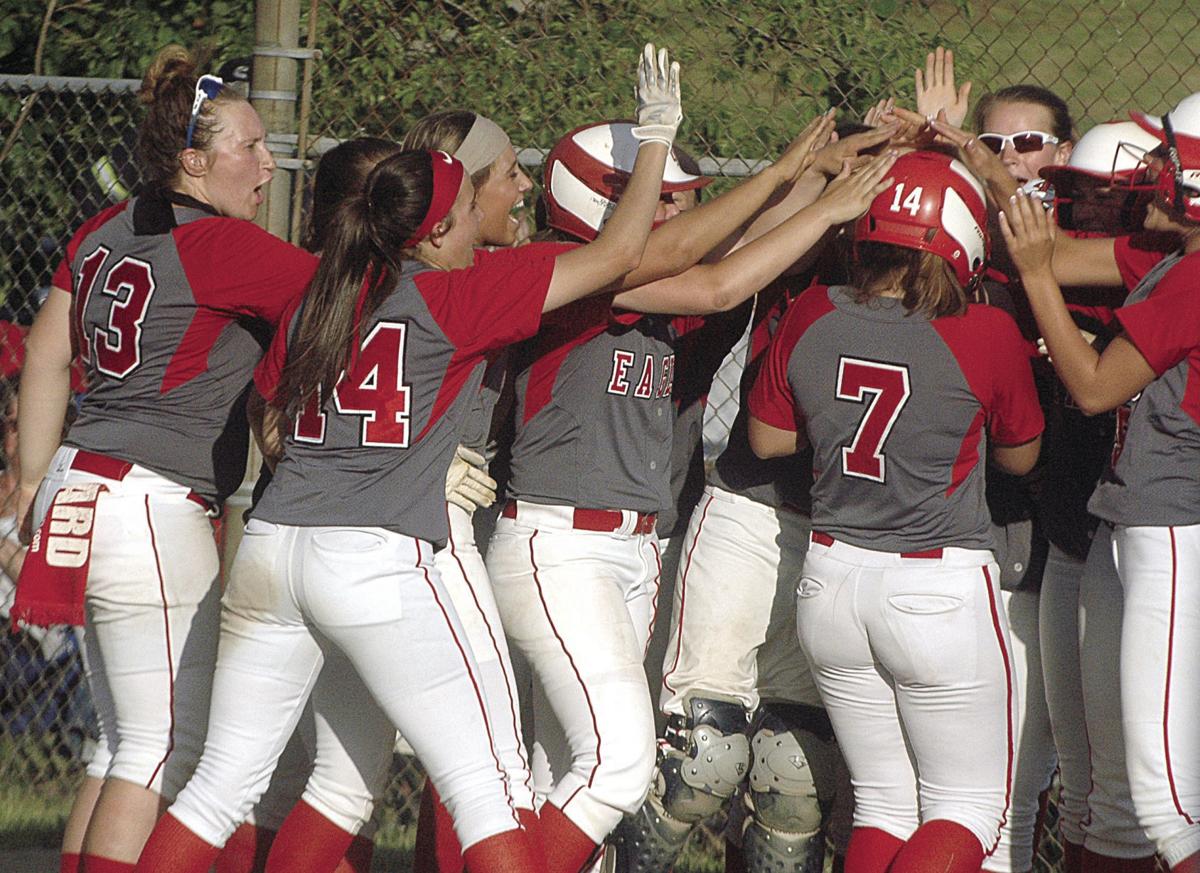 Franklin County freshman Laken Adkins (No. 7) is mobbed by her teammates at home plate after belting a two-run home run with no outs in the top of the seventh inning of Friday’s 7-6 Piedmont District varsity softball loss to Bassett in the regular-season finale for both clubs. Senior third baseman Karle Cundiff scored on the blast ahead of Adkins.

Franklin County senior shortstop Logan Pasley leaps into the air and snags a line drive for the Eagles in a on-run Piedmont District loss to Bassett Friday on the road.

BASSETT — Jade Hylton belted a grand-slam home run and a solo homer Friday to lead Bassett to a 7-6 Piedmont District varsity softball victory over Franklin County in the regular-season finale for both clubs.

With the win, its second over FCHS on its home diamond in as many years, Bassett avenges an earlier-season league setback to the Eagles.

Hylton smacked her grand-slam in the bottom of the fourth inning and she delivered an RBI double in the sixth to produce a three-run lead.

FCHS (5-7 in the Piedmont District, 9-11 overall) pulled to within a run in the top of the seventh with no outs when freshman Laken Adkins belted a two-run home run. Senior third baseman Karle Cundiff scored ahead of the blast, but the Eagles were retired in order thereafter.

Courtney Bryant paced the Eagles with three hits, including a double, while Taylor Anderson collected two.

FCHS lost despite registering 11 hits and striking out only three times.

Duirng the Piedmont’s regular-season campaign, the Eagles were 2-0 versus George Washington-Danville, 1-1 versus Bassett, Patrick County and Magna Vista and 0-2 versus Tunstall and Halifax County.

All 12 of the game’s runs were manufactured in the first two innings.

With the win, FCHS avenges an earlier-season, 3-0, loss to the Cougars in Stuart.

The Cougars tagged Eagles starting right-hander Presley Washburn for four runs in the top of the first inning, but the Eagles rallied for three runs in their half of the frame to cut the deficit to one run.

Patrick County scored its final run in the top of the second.

FCHS answered with four runs in the bottom of the stanza to take the lead for good.

Washburn earned a complete-game victory. She walked one and struck out five. FCHS played error-free softball in her defense.

All five of the Cougars’ runs were earned.

Washburn did surrender two home runs among the nine hits that she allowed; Patrick County’s other seven hits were singles.

Karle Cundiff and Taylor Anderson each registered three hits for the Eagles, while Bryant and Washburn each recorded two and Logan Pasley, Alex Prillaman, Katelyn Craghead (double) and Rachel Barnhart each had one.

Bryant drove in four runs, while Pasley, Washburn and Barnhart each drove in one.

The Eagles and the Cougars were scheduled to meet Tuesday in the quarterfinals of the Piedmont District tournament in Stuart. The contest was postponed from Monday.

FCHS is the No. 5 seed in the seven-team, single-elimination tournament, Patrick County is the No. 4 seed.

Tuesday’s winner travels to South Boston to take on No. 1 seed Halifax in today’s semifinals.

Tunstall, the No. 2 seed, plays Magna Vista, the No. 3 seed in today’s semifinals. The championship contest is set for Friday at the site of the higher seed.