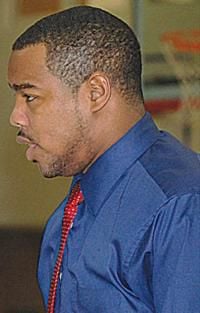 Former Franklin County head boys basketball coach Keyode Rogers, who guided the Eagles to a 24-24 record during a two-year tenure, is in his first year as Thomas Dale’s head coach.

RICHMOND — Thomas Dale, Franklin County’s opponent in tonight’s Class 6 Region A boys basketball tournament quarterfinals, has been a metaphorical hurdle the Eagles have cleared in two of their most recent postseason journeys.

In 2016, the Eagles defeated the Knights for the final Class 6 Conference 3 championship at Samuel M. Hawkins-Central Gymnasium. That campaign ended with the Eagles reaching the state tournament for the fourth time in program history after a third-place regional finish and a loss to W.T. Woodson, that year’s state champion.

In 2017, the Eagles defeated the Knights in the semifinals of the Class 6 Region B tournament on their home floor to secure a fifth state-tournament berth in program history. That campaign ended with a setback to James River-Midlothian in the regional finals and a loss to Frank Cox in the state quarterfinals.

This year’s match-up adds a new twist to what may be a budding hoops rivalry.

The Eagles (7-16), the No. 4 seed from the West Division of Region A, which has not played since falling to William Byrd, 63-53, in the quarterfinals of the Blue Ridge District tournament.

FCHS has not won since defeating Staunton River in overtime for its final Blue Ridge District triumph of its inaugural league campaign.

The Knights (17-5), the No. 1 seed from the West Division of Region enters the contest having lost two of their last games. Included in that slide is a one-point loss to Cosby, one of five non-district opponents the Eagles have conquered this season.

The intrigue is in the coaching match-up — the Knights’ first year bench boss is Keyode Rogers, the Eagles head coach for two seasons (2014, 2015) following the two-year term of Lloyd Church and preceding the tenure of current FCHS bench boss Tom Hering.

As a prep standout at Magna Vista, Rogers played on a state championship team in 1998 that defeated the Eagles in the regular season and ended Liberty-Bedford’s bid for a Group AA title three-peat.

During his college career at Concord (W.Va.) University, Rogers was a teammate of former Eagles All-State peformer Lewis Muse.

Rogers was selected from a field of candidates that included Hering and several of the players featured on FCHS’s most recent state tournament teams were in the program when Rogers was in charge.

In 2017, Rogers served as an assistant coach at L.C. Bird and earned a state-championship ring when the program, led by former Patrick Henry-Roanoke prep standout Troy Manns, captured the Class 5 crown.

Rogers was hired in May 2013 to replace Church after his six-year term at Orange County, which competed in Group AA and Group AAA when he steered that school’s program.

Rogers oversaw FCHS’s move from the Western Valley to the Piedmont District.

In his final season as coach, the Eagles defeated a Martinsville team that won the Class 2 state championship and a George Washington-Danville squad that reached the state semifinals in Class 4.

Upon his exit, Rogers, who said his resignation was of a family nature, may have predicted the Eagles’ success that occurred in 2017 and 2018.

“I thought it was a great run. Records aside, I thought the kids bought into the program. I felt like we were building something nice here. I think whoever comes here has a great foundation already set,’’ Rogers said.

“There are kids here who are going to be really good basketball players. It does hurt my heart that we have to leave, but it’s something that’s best for us,’’ Rogers said.

FCHS faced a similar scenario back in the 1970s when the late Al Johnson, who guided the Eagles to the 1972 Group AAA Roanoke Valley District championship, left the post to accept the head coaching position at Northside, and he would then coach against the Eagles.

Hering would coach against FCHS while he served as Bassett’s head boys basketball coach too.

First-Round Results: Advancing in tournament play Monday night were Floyd Kellam, a 52-42 winner over Grassfield; Landstown, a 76-29 victor over Tallwood; and Oscar Smith, a 91-43 winner over Ocean Lakes.

Class 6 Region A Girls: James River-Midlothian, the top seed in the West Division of Region A, brings an 18-2 record into tonight’s quarterfinal-round contest against coach LeBryan Patterson’s club.

The Eagles (15-9) have not played since losing to eventual league champion William Fleming, 50-39, in the semifinals of the Blue Ridge District tournament.

First-Round Results: Advancing in tournament play Monday night were Floyd Kellam, a 64-38 winner over Oscar Smith; Grassfield, a 49-38 winner over Ocean Lakes; and Landstown, a 53-16 victor over Tallwood.