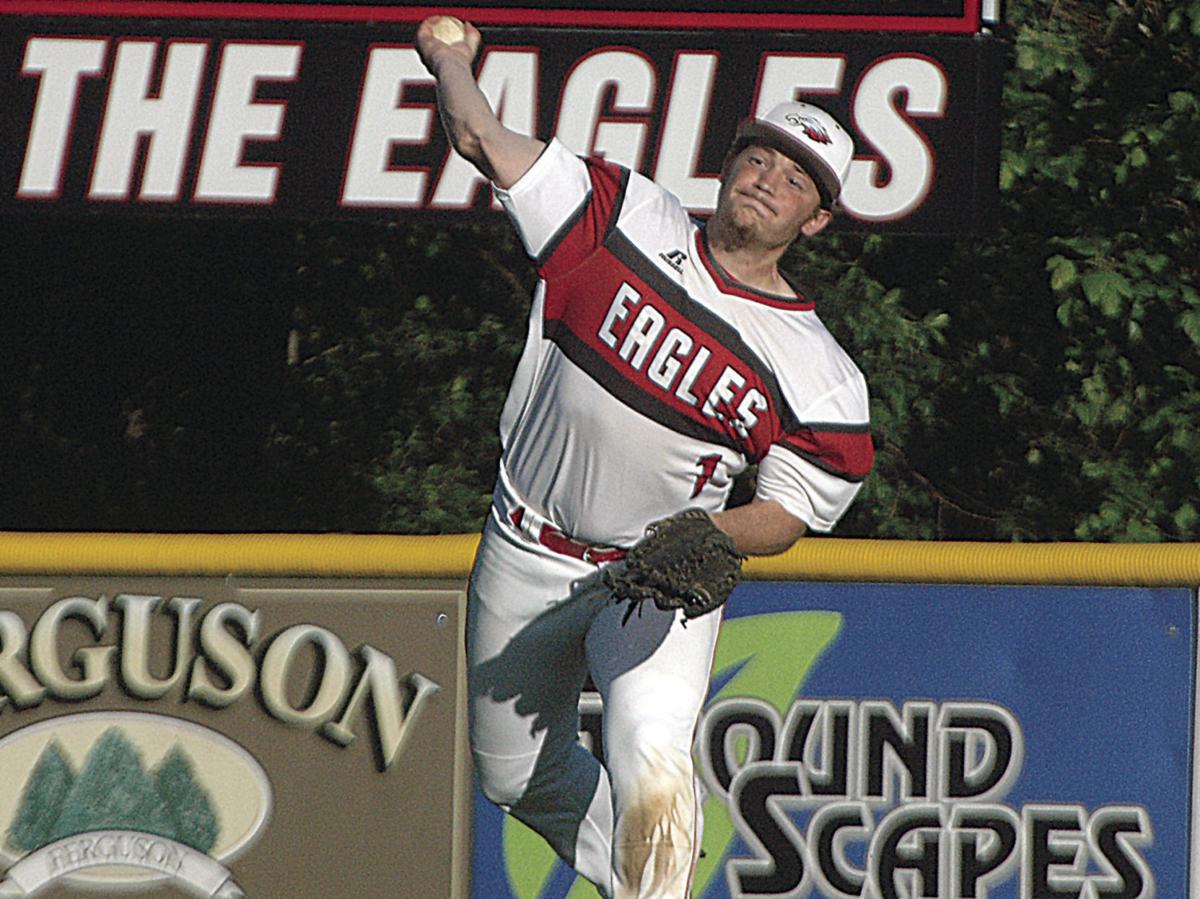 Franklin County senior outfielder Easton Forbes (No. 1) prepares to unleash a throw to the plate from right field during the top of the fourth inning of Monday’s 18-12 loss to Patrick County in the quarterfinals of the 2019 Piedmont District baseball tournament at W.W. Naff Jr. Field. 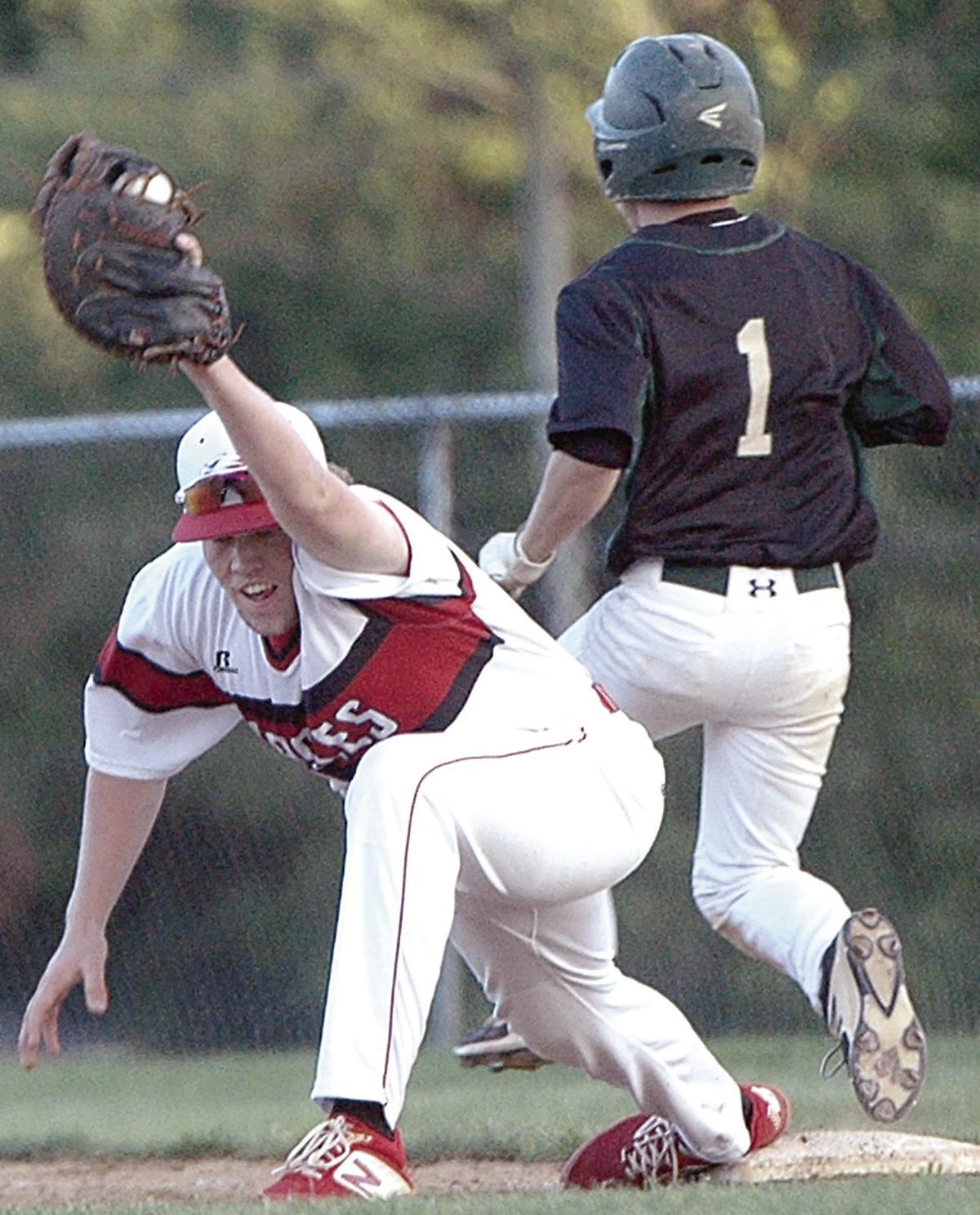 Before Franklin County senior first baseman Cameron Mullins can stretch and snag a relay throw from across the diamond, a Patrick County player arrives safely at the bag for an infield hit.

Franklin County senior outfielder Easton Forbes (No. 1) prepares to unleash a throw to the plate from right field during the top of the fourth inning of Monday’s 18-12 loss to Patrick County in the quarterfinals of the 2019 Piedmont District baseball tournament at W.W. Naff Jr. Field.

Before Franklin County senior first baseman Cameron Mullins can stretch and snag a relay throw from across the diamond, a Patrick County player arrives safely at the bag for an infield hit.

The Cougars, the No. 6 seed in the eight-team tournament, scored in every inning but the seventh, manufacturing multiple runs in four frames en route to an 18-12 slug-fest victory over the Eagles in a contest that closed in on the three-hour mark at its conclusion.

The teams combined for 28 hits, but the most revealing statistic was the six errors committed by the Eagles (14-6), while the Cougars played error-free defense.

FCHS’s loss ends its second term in the Piedmont District, which for baseball began in the spring of 2014. Next season, FCHS makes its debut in the Blue Ridge District, which also stages a post-season league tournament.

The 2019 campaign; however, is not over for the Eagles. On Monday, they open Class 6 Region B tournament play at a site to be determined and against an opponent to be determined later this week.

A year ago, FCHS entered the regionals at the No. 8 seed and upset No. 1 seed Manchester in the quarterfinals by a run, 4-3, on the road. Its season ended in the semifinals with a 2-1 setback to Cosby.

Had FCHS won that game, it would have earned a berth in the Class 6 state tournament.

The Eagles’ 2019 line-up features numerous players who were on last year’s club that reached the doorstep of the state tournament.

FCHS was the third seed in the Piedmont tourney despite sweeping No. 2 seed Tunstall during the regular season.

The Trojans, who played a complete district schedule as opposed to the Eagles who played only nine league games, earned the better seeding based on district winning percentage.

Tunstall advanced to the semifinals with a victory over No. 7 seed Martinsville and entertains Patrick County in today’s semifinals.

During the regular-season, FCHS played Halifax twice and lost both games; the Eagles swept Bassett and Tunstall and split with Magna Vista, while playing George Washington-Danville just once.

By Virginia High School League (VHSL) rules, Patrick County and Martinsville are not required to play FCHS during the regular season because of the differences in classification — the Cougars are Class 3 and the Bulldogs are Class 2.

The rule; however, does not preclude those teams from playing the Eagles during the regular season.

Martinsville and Patrick County were regular-season no shows, but the Cougars made the most of their visit to Naff Field Monday.

All five of their runs in the sixth were unearned and manufactured with two outs. The Eagles committed half of their six defensive blunders in the frame.

Ferguson (1-2), who lasted an inning, was charged with the loss.

Colton Kent paced the Eagles by going 4 of 5 at the plate with two doubles and three RBIs, while Brayden Merrick was 3 of 4 with four RBIs.

Kent and Merrick, both of whom are junior infielders for the Eagles, both scored twice.

FCHS and Patrick County have played in the past as non-district rivals.

play with triumph at Bassett

The Eagles (6-3 in the Piedmont District) defeated the Bengals for the second time this season.

The Bengals prevented the shutout when they scored their lone run in the bottom of the fourth.

FCHS finished the scoring with a run in its half of the sixth.

The Eagles outhit the Bengals, 8-4, and each team committed one error.

Senior right-hander Cameron Mullins (7-0) worked six innings for the victory. He surrendered three hits, a walk and a run, which was unearned, while striking out five. He threw 69 pitches, 46 of which were strikes, to 24 batters.

FCHS chased Bassett starter Elijah Sacra after 2/3 of an inning. He yielded one hit, three walks and two runs, both of which were earned. He threw 29 pitches, 10 of which were strikes, to seven batters.

Colin Cunningham worked 6 1/3 innings of relief and permitted seven hits, one walk and five runs, four of which were earned, while striking out five. He threw 88 pitches, 63 of which were strikes, to 28 batters.

All eight of FCHS’s hits were singles.

Dawson Cooper paced the Eagles with three hits, while Grayson Chitwood collected two and Mullins, Michael Williams and Easton Forbes each registered one.

Mullins drove in three runs, while Chitwood, Noah Basham and Brayden Merrick each drove in one.

Chitwood and Cooper each scored twice, while Williams, Forbes and Bailey Hall each scored once.

Bassett’s Ben Hylton recorded the game’s lone extra-base hit: a double. He was 1 of 3

Cunningham, Dylan Cassell and Seth Moore each had one hit. Cassell scored the Bengals’ run.

With the victory, FCHS matches its win total (14) from last season.

Much thanks for composing such an intriguing article on this point. This has truly made me think and I plan to peruse more Euro T20 Slam live video