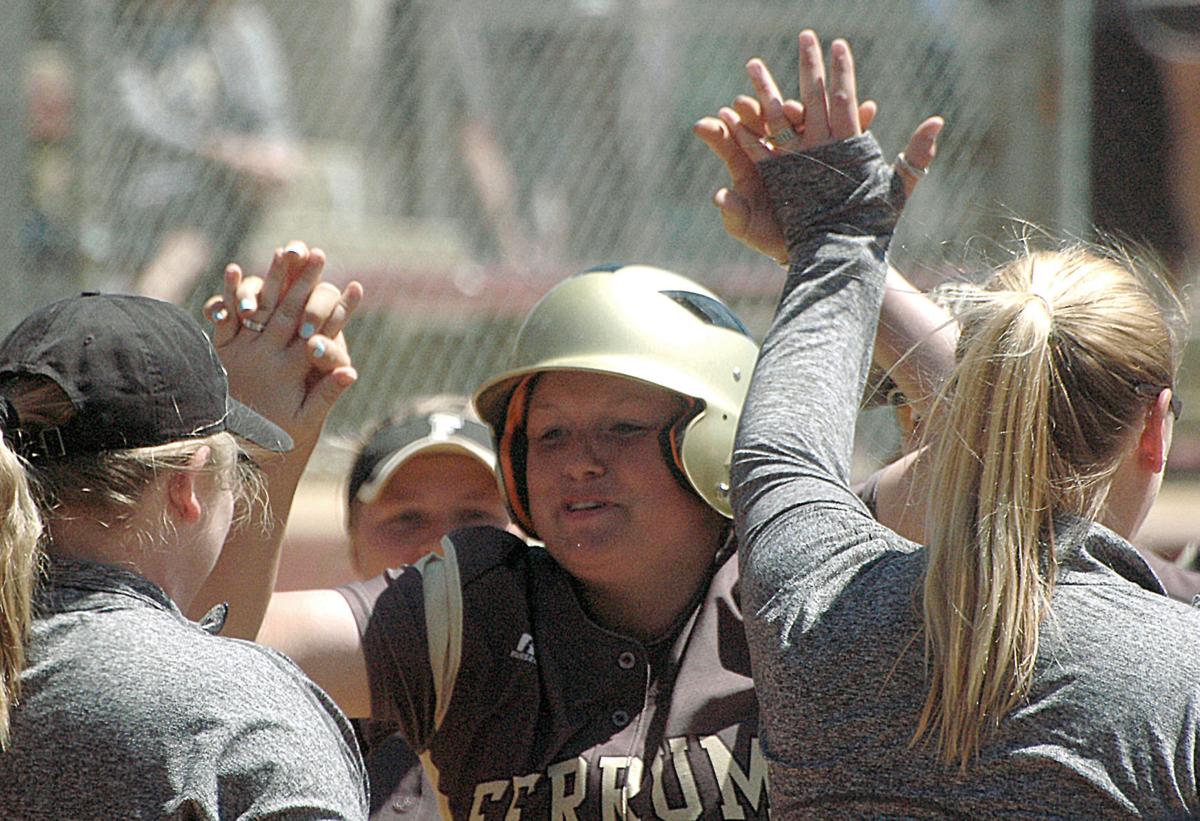 Ferrum College outfielder Bailey Oakes celebrates with teammates and coaches after she belts a three-run home run during a five-run fifth inning in the Panthers’ 6-2 Old Dominion Athletic Conference tournament victory over Guilford (North Carolina) College at the James I. Moyer Sports Complex. 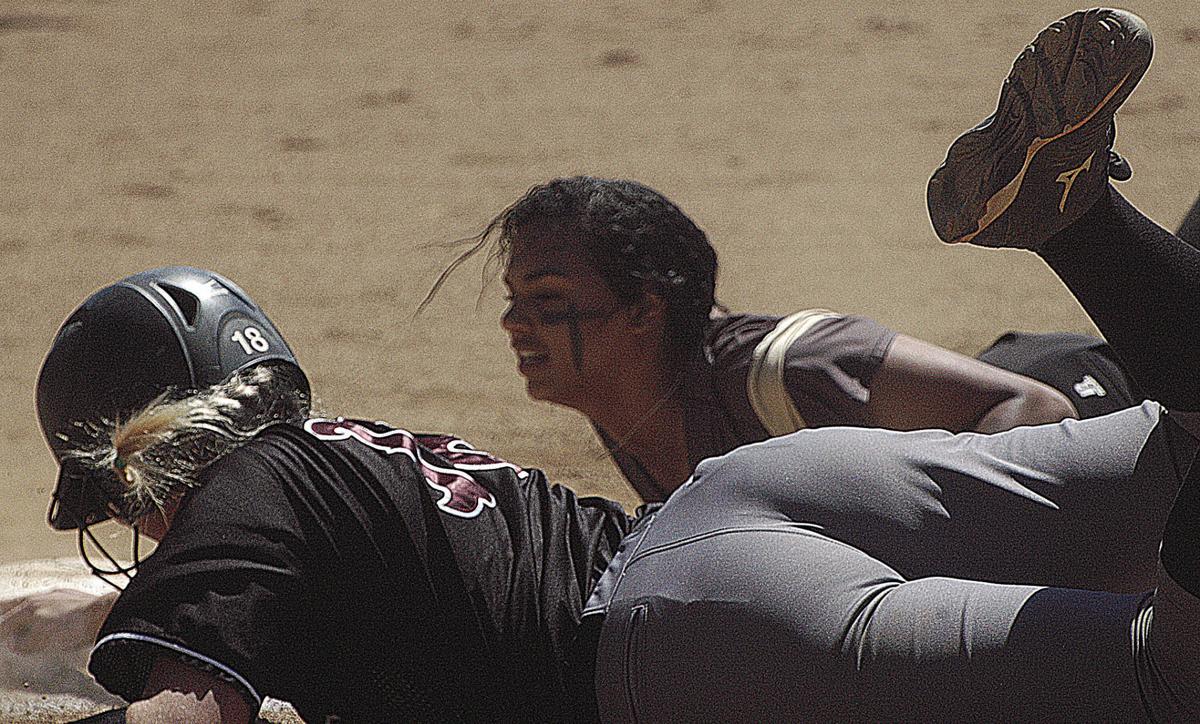 Ferrum College first baseman Lois Carpenter dives back to the bag and places a tag on a Guilford (North Carolina) College base runner to complete an unassisted double play. 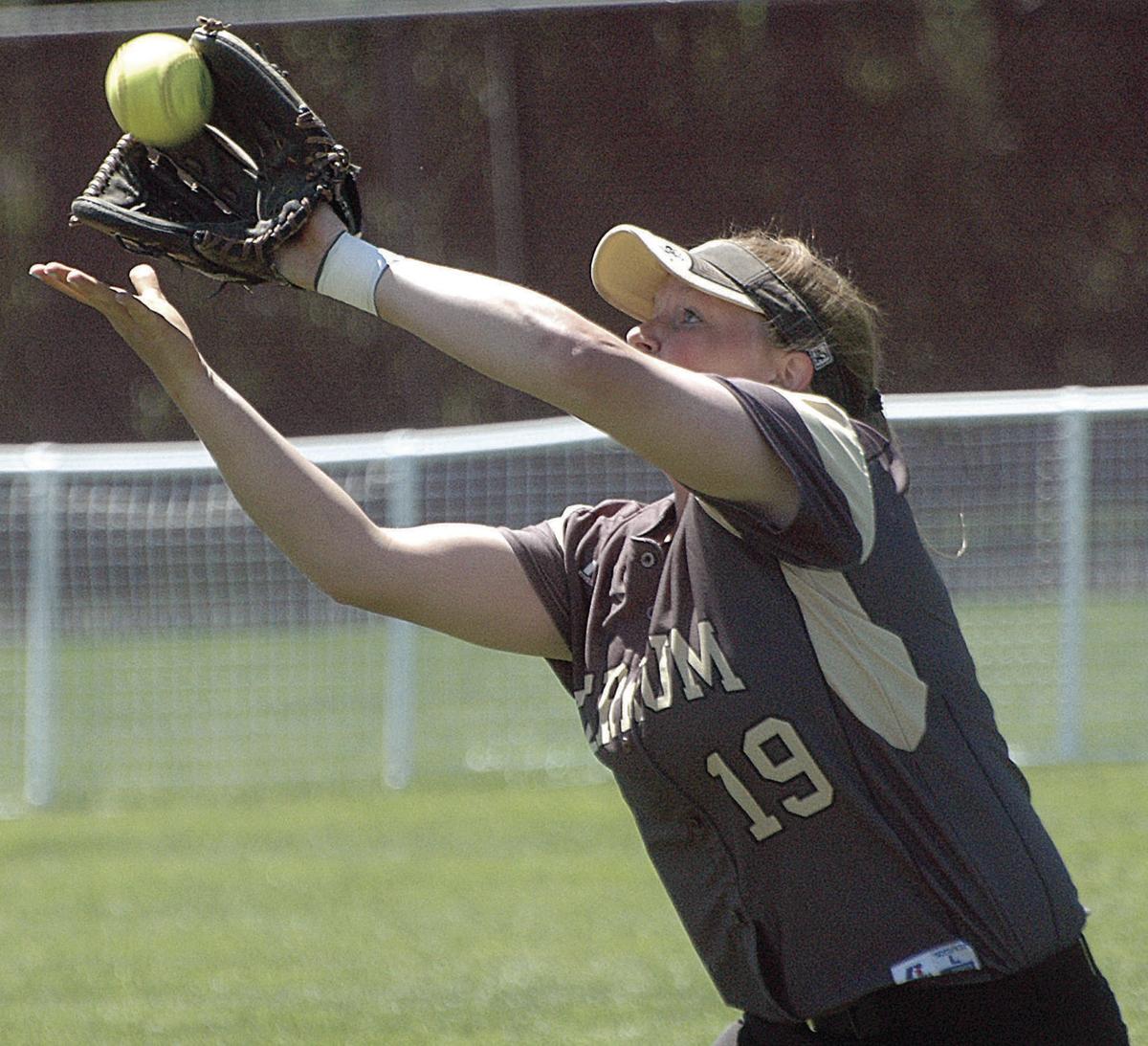 Ferrum College outfielder Bailey Oakes celebrates with teammates and coaches after she belts a three-run home run during a five-run fifth inning in the Panthers’ 6-2 Old Dominion Athletic Conference tournament victory over Guilford (North Carolina) College at the James I. Moyer Sports Complex.

Ferrum College first baseman Lois Carpenter dives back to the bag and places a tag on a Guilford (North Carolina) College base runner to complete an unassisted double play.

The Marlins, the top-ranked team in Division III, broke open a close game by tallying two runs in the fifth inning and one in the sixth for a 9-4 victory.

The loss ended Ferrum’s three-game stay in the tournament and its season.

The Panthers (20-21) were making their inaugural appearance in the ODAC tournament after competing in the USA South Athletic Conference for 30 years.

Ferrum defeated Virginia Wesleyan the regular-season finale for both teams, and Saturday, the Panthers led 2-0 after half-an-inning of play.

Virginia Wesleyan squared the count by scoring twice in the last of the second, then Ferrum broke that stalemate with two runs in the top of the third.

The Marlins manufactured four runs in the bottom of the third to take the lead for good.

Hall was the losing pitcher in the Panthers’ regular-season win over the Marlins, who have been ranked No. 1 in the nation for all but two weeks this season.

Kaylah Duplain, who was 3 of 3 with four RBIs, belted a double and a home run to left centerfield for the Marlins.

For Ferrum, Bayley Cunningham was 2 of 4 with a pair of doubles and three RBIs and Tori Scott had a double.

Righthander Jasmie Agee (6-14) allowed 11 hits and eight earned runs over six innings. She struck out one.

Panthers to win over Guilford

SALEM — A three-run home run to centerfield by senior outfielder Bailey Oakes was the highlight of a five-run fifth inning by No. 7 seed Ferrum College in the Panthers’ 6-2 victory over No. 6 seed Guilford (North Carolina) College Saturday in the 2019 Old Dominion Athletic Conference (ODAC) softball tournament at the James I. Moyer Sports Complex.

The Quakers (26-15) were eliminated from the tournament with the loss, a setback that ended their 2019 season.

Ferrum led 1-0 after half-an-inning of play, but Guilford erased that deficit by scoring single runs in the second and third frames.

The Quakers maintained their one-run advantage until the decisive fifth inning.

Ferrum. which earned its first victory in the ODAC tournament in program history, outhit Guilford, 12-8, and won despite committing three errors. Guilford was charged with one error.

Savannah Yale was 2 of 3 with a double to pace the Quakers.

Guilford pitcher Makayla Carver (3-2) was charged with the loss. In 4 1/3 innings, she allowed nine hits, a walk and six earned runs, while striking out four.

Allison McGhee, Lois Carpenter and Jordan Hamlett each belted a double for the Panthers.

Jasmine Agee turned in a complete-game effort inside the pitching circle. She yielded eight hits and one earned run, while striking out four in seven innings of work.

SALEM — No. 2 seed Emory & Henry College erased a one-run deficit by scoring 11 unanswered runs Friday en route to an 11-1 victory over Ferrum College in the opening game of the 2019 Old Dominion Athletic Conference (ODAC) softball tournament for both teams at the James I. Moyer Sports Complex.

The contest was stopped after 4 1/2 innings because of the run rule.

The Panthers tallied their lone run in the top of the first inning and led 1-0 after half-a-frame of play.

The Wasps manufactured two runs each in the first and second innings, one in the third and six in the fourth.

The Wasps also got doubles for Leanna Toler, Lyndsay Boyd and Kyndall Hiatt.

Varner was 2 of 3 with two runs and two RBIs.

Pitcher Cameron Derr (10-6) pitched five innings for the win. She surrendered three hits and an earned run, while striking out nine.