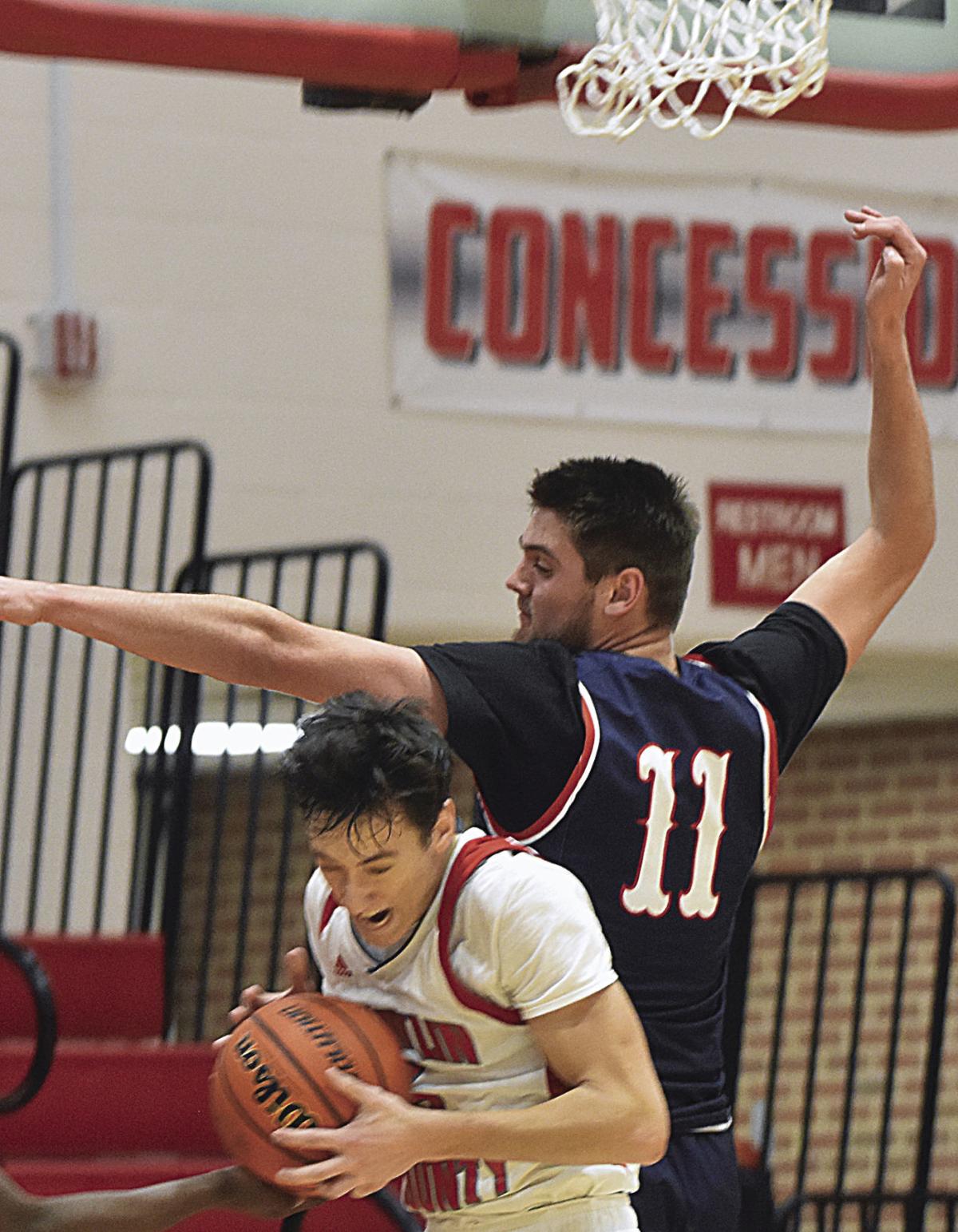 Franklin County’s Joshua Luckett grabs a rebound in front of Magna Vista’s Ryan Johnson (No. 11) during the second half of Wednesday’s 56-55 Warriors’ victory over the Eagles at Samuel M. Hawkins-Central Gymnasium. 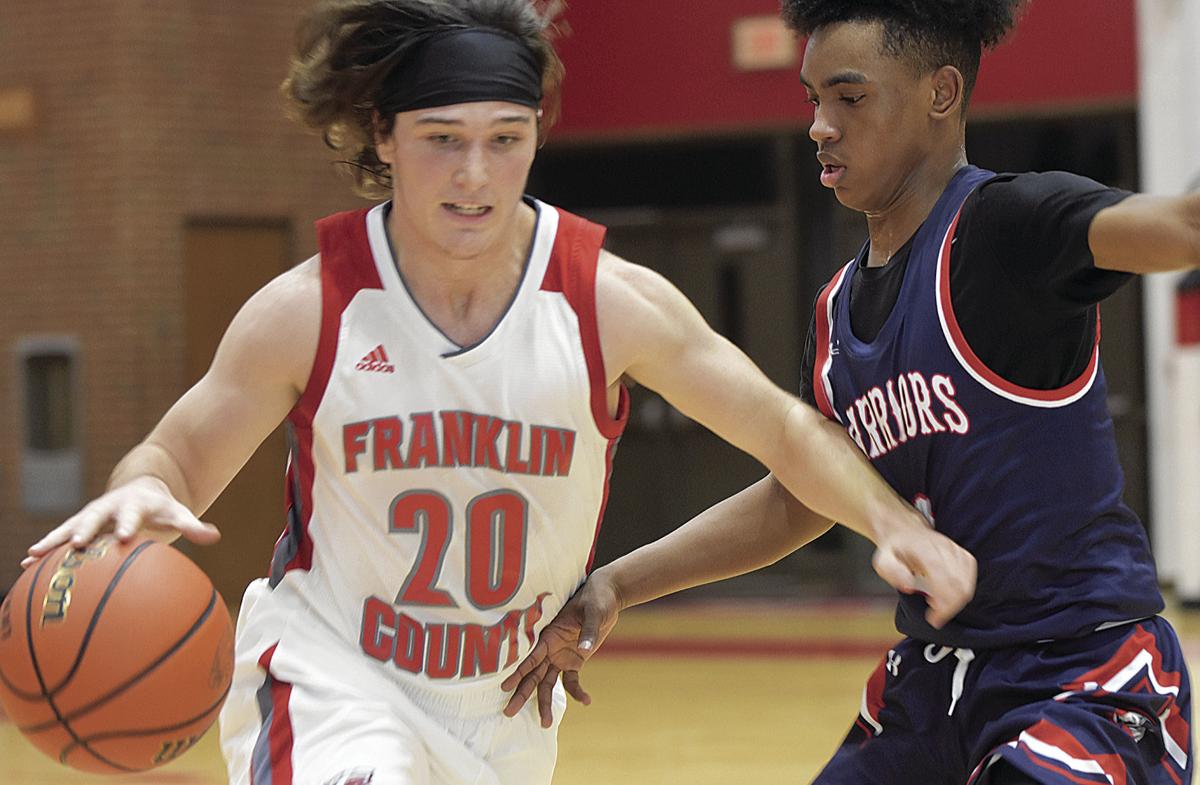 Franklin County senior Hunter Cannaday (No. 20) tries to advance the basketball past a Magna Vista defender and across half court during the fourth quarter of Wednesday night’s non-district boys varsity basketball contest at Samuel M. Hawkins-Central Gymnasium that was won by the Warriors, 56-55.

Franklin County’s Joshua Luckett grabs a rebound in front of Magna Vista’s Ryan Johnson (No. 11) during the second half of Wednesday’s 56-55 Warriors’ victory over the Eagles at Samuel M. Hawkins-Central Gymnasium.

Franklin County senior Hunter Cannaday (No. 20) tries to advance the basketball past a Magna Vista defender and across half court during the fourth quarter of Wednesday night’s non-district boys varsity basketball contest at Samuel M. Hawkins-Central Gymnasium that was won by the Warriors, 56-55.

Joining the Eagles in the field for both meets are Northside, Lord Botetourt, William Fleming, William Byrd and Staunton River.

FCHS’s teams are making their debuts in this meet.

In 2018, both the Eagles boys and girls squads captured team championships in the Piedmont District.

Top FCHS performers Garrett Garman, a senior, and Kylie Cooper, a sophomore, have qualified for the Class 6 state meet in Hampton later this month based on meeting prescribed times, heights and or distances from invitational meets during the season.

FCHS competes in the Class 6 Region A meet Friday and Saturday, Feb. 14-15 in Hampton.

SALEM — Because of Thursday’s heavy rainfall which has led to threats of severe flooding, the Blue Ridge District has cancelled its postseason boys and girls varsity swimming meets, which were scheduled be contested at the Salem YMCA.

The Eagles were seeking their first district championships in swimming since 2010 when both the boys and girls squads captured titles in the Western Valley District.

Panthers fall to Emory & Henry at home by 17

E&H and Bridgewater College are tied for second place in the conference standings, a half-a-game in arrears to league leader Washington and Lee University (12-2 in the ODAC).

Ferrum is in 10th place, but the Panthers and Virginia Wesleyan University each has three conference victories.

Ferrum and Virginia Wesleyan face off in the regular-season’s final game in Virginia Beach, Feb. 22.

“I thought our kids competed hard (against E&H). The energy and effort were there,’’ Panthers head coach Bryan Harvey said. “We have to clean up a few things with the turnovers and the amount of offensive rebounds we gave up.

“We extended our defense and I liked what that looked like, but we fouled and put them on the free-throw line more than we should have. We will work on that,’’ Harvey said.

The top 10 teams qualify for the ODAC’s postseason tournament.

“We will keep working and trying to improve. We want to put ourselves in a position to make the ODAC tournament and give ourselves a chance. To do that, we have to keep our head down and keep working,’’ Harvey said.

E&H’s Peyton Williams came within three assists of achieving a triple-double; she finished with 10 points, 11 rebounds and seven assists.

Ferrum’s next game is Saturday against Bridgewater.

Both the Colonels and the Warriors have defeated the Eagles twice this season.

FCHS is 2-7 in games played at Hawkins Gym this season.

William Fleming and Northside are tied for first place in the Blue Ridge District, both with 8-1 league records.

The Eagles pulled to within nine points twice in the fourth quarter and was within eight, 48-40, with less than two minutes to play. But, the Colonels finished the game with a 7-0 surge to secure a 15-point triumph.

On Wednesday, Magna Vista made 7 of 10 free throws in the closing 2:06 in its win. The second of two free throws with 3.2 seconds to play proved to be the game-winner.

The Eagles did get one final opportunity to claim the victory as Hunter Cannaday’s 3-point field goal try at the horn drew iron, but refused to fall.

Tyshaun Zeigler netted 12 of his team-best 14 points after intermission, and Cannaday finished with 13 points, 10 of which he tallied in the first half.

The league’s postseason tournament begins Tuesday with quarterfinal-round games matching the Nos. 3 and 6 and Nos. 4 and 5 seeds.

An FCHS-William Byrd rematch appears likely at the site of the higher seed.

Entry to the event is with ticket only and space is limited.

Food plates of two hot dogs, chips and a drink will be on sale for $5 at the event.

There will be drawings for door prizes and a 50/50.

Hall, who resides with his wife, Virginia, in Rocky Mount, is a member of the Franklin County High School Athletics and the Salem-Roanoke Baseball halls of fame, is a former long-time county youth sports coach and patron of athletics at FCHS and Ferrum College. He is a member of Post 6 and serves as an officer with the baseball team.

In December, Hall, 81, was struck by a car while on his daily walk through town.

The accident has left Hall with a traumatic brain injury and, after a stay in Roanoke Memorial Hospital, he is receiving treatment at Kindred Hospital in Greensboro, N.C.

“We are hoping to sell more than 200 tickets for this fundraiser to increase our donation amount to the family. We will also be accepting personal donations for Alvin’s family at the door,’’ Post 6 manager Aaron Haigler said.

Pre-sale tickets can be purchased from Haigler or at the following local businesses: PSG Electric, Foley’s Automotive, Hollywood Beauty Salon and Arrington Sports.

The meeting is scheduled for Thursday, Feb. 13 in the Elton Bonner Auditorium during activity period.

The one-day event is for youth and middle-school age competitors.

Individual and team competitions are included.

Individuals and teams can register on trackwrestling.com or on the day of the tournament.

Format is round robin with multiple weight divisions.

Hunting banquet is set for March 7

A hunter education class is set for Monday and Tuesday, March 9-10 at the Franklin Center in Rocky Mount.

Passage of this class is required to obtain a hunting license in Virginia.

Students must attend both sessions of the class.

Books are available at the Franklin Center.

Any student, male or female, who will be enrolled at BFMS or FCHS for the upcoming academic year, is eligible to try out, but candidates must have a Virginia High School (VHSL) physical form dated after May 1, 2019 on file with the high school athletic department in order to try out.

Cheerleader candidates will be taught a cheer and a dance for tryouts and they do not need to know how to tumble or perform gymnastics in order to try out.

Also, candidates may be asked to stunt.

Mascot candidates will be asked to dance in costume to the tryout music.

Open conditioning for those interested in trying is set for Mondays and Thursdays beginning in late February or early March. Specific dates are to be announced and posted at the high school and middle school and on line.

Candidates must have a current physical form on file to take part in conditioning.

Those interested in trying out need to obtain an informational packet from any office on campuses of BFMS or FCHS or from the high school athletic department in Hawkins Gym.

The Chug for the Jug 5K race returns to the local running calendar in April after a year’s absence.

The race takes the starter’s gun at 8 a.m. from the rear parking of Franklin County High School.

From there, runners travel down Perdue Lane to Tanyard Road down South Main Street to Floyd Avenue through downtown Rocky Mount and back to the high school.

The Crooked Road Running Club has taken over the management, promotion and staging of the race.

In past years, the Community Partnership for Revitalization (CPR) and the Franklin County Department of Parks and Recreation were in charge of those duties.

Colin Munsey of Pearisburg was third.

For information on this year’s race, contact Karen Dillon by email: krobdill@gmail.com.