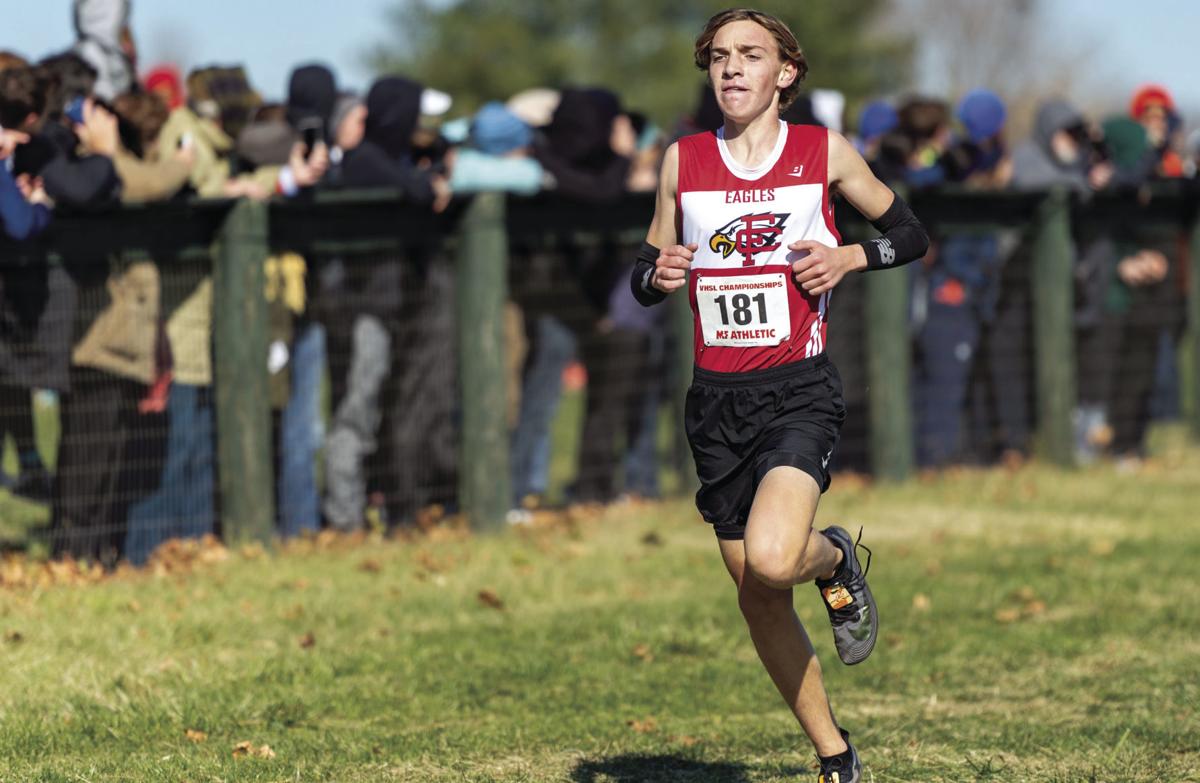 Addie Shorter, a Franklin County sophomore competing in the Class 6 state girls cross country meet for the second year in a row, puts the finishing touches on a 16-place showing.

Addie Shorter, a Franklin County sophomore competing in the Class 6 state girls cross country meet for the second year in a row, puts the finishing touches on a 16-place showing.

Atchue, one of only eight freshmen in a field of 103 runners, completed the five-kilometer (3.1-mile) course in 16:04, which was just seconds shy of breaking the program-record time he established in placing second in the regionals in Chesapeake earlier this month.

Atchue is the second FCHS distance runner to qualify for the Class 6 boys’ state cross country meet in as many seasons. Last year, Trent Whittaker, now a NCAA Division I runner at Virginia Military Institute (VMI), capped his final prep cross country season, by competing in the state championships.

Region A champion Wesley Bond, a senior from Landstown, finished second in 15:44, 23 seconds in arrears to winner Sean Stuck (15:21), a senior from West Springfield.

Each of the top six finishers broke the 16-minute mark.

Region A champion Ocean Lakes was fourth in a 12-team field with 137 points, while Region A representatives Cosby (204) and Floyd E. Kellam (228) were seventh and 11th.

In the girls’ 5K, FCHS sophomore Addie Shorter, making her second state championship meet appearance in as many years, finished 16th in 19:03. Shorter was fourth in the region meet and second in the Blue Ridge District and Metro Invitational championships.

FCHS sophomore Kylie Cooper battled a reported illness during Saturday’s race, but she did complete the trek in an uncharacteristic 22:01. She was credited with a 95th-place finish in a 101-runner field.

Cooper won the Metro Invitational and the Blue Ridge District championships before placing third in the Region A meet to earn her second state berth in as many years. She is the reigning Class 6 state champion in the 1,600-meter run in outdoor track and field.

Bethany Graham, a senior from John Champe, won the race in 17:42. She was the only runner to break 18 minutes.

Region A champion Aniya Mosley, a sophomore from Ocean Lakes, finished second in 18:16.

Region A champion Floyd E. Kellam placed fifth in a 12-team field with 125 points, while Region A runner-up Ocean Lakes came in third with 119. Cosby, representing Region A, was sixth with 129 points.