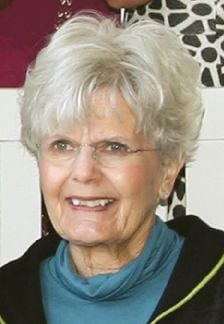 COOPER Belle N. February 18, 1938 - February 5, 2020 Belle N. Cooper died on Wednesday, February 5, 2020, at home, surrounded by family. She leaves her husband of 62 years, Robert M. Cooper "Bob"; two daughters Cathy and Ray Woolson of Penhook, and Sam and Harry Jordan of Fincastle; two sons, Mac and Inglath Cooper of Penhook, and Taz and Shelley Cooper of Roanoke; 13 grandchildren, Raymond Woolson, Cooper Woolson (Elizabeth), Jack Jordan (Heather), Story Woolson, Belle Woolson, Bobbie Jordan, Lola Cooper, Kavvi Cooper, Tatti Cooper, Abigail Cooper, Nadia Cooper, Briggs Cooper, and Campbell Cooper; and one great-granddaughter, Lyric Woolson. Preceding her in death were Belle's brothers, CB and Walter Nolen; and her parents, Buford and Naomi Nolen. Born and raised in Ferrum, Va., the daughter of Buford and Naomi Nolen, she was a lifelong resident of Franklin County and Roanoke County. She graduated from Franklin County High School and Longwood College. Belle married Bob Cooper on June 8, 1957, and spent the next four years stationed across the country as Bob was an Airforce fighter pilot. Bob and Belle founded Uttermost in 1975, and began what has become a top international home furnishings company with operations in Virginia, California, and partner factories throughout Asia. In 1964, Belle turned to the Lord and she said, "my hope is that future generations will come to know a new life in Jesus Christ." Her favorite verse was, "Thou wilt keep him in perfect peace, whose mind is stayed on thee: because he trusteth in thee." Even in her last days, Belle was still sharing her love of Jesus. Visitation will be held at Franklin Heights Church, 110 Hilltop Dr, Rocky Mount, Va., from 3 until 6 p.m. Sunday, February 16, 2020. Funeral services will follow on Monday, February 17, 2020, at 11 p.m., also at Franklin Heights Church. A private burial will follow for immediate family. In lieu of flowers, donations may be made to Every Home for Christ (EHC.org) or Franklin Heights Church (franklinheights.org). Arrangements by Flora Funeral Service and Cremation Center, Rocky Mount.

To plant a tree in memory of Belle Cooper as a living tribute, please visit Tribute Store.
+1
+1