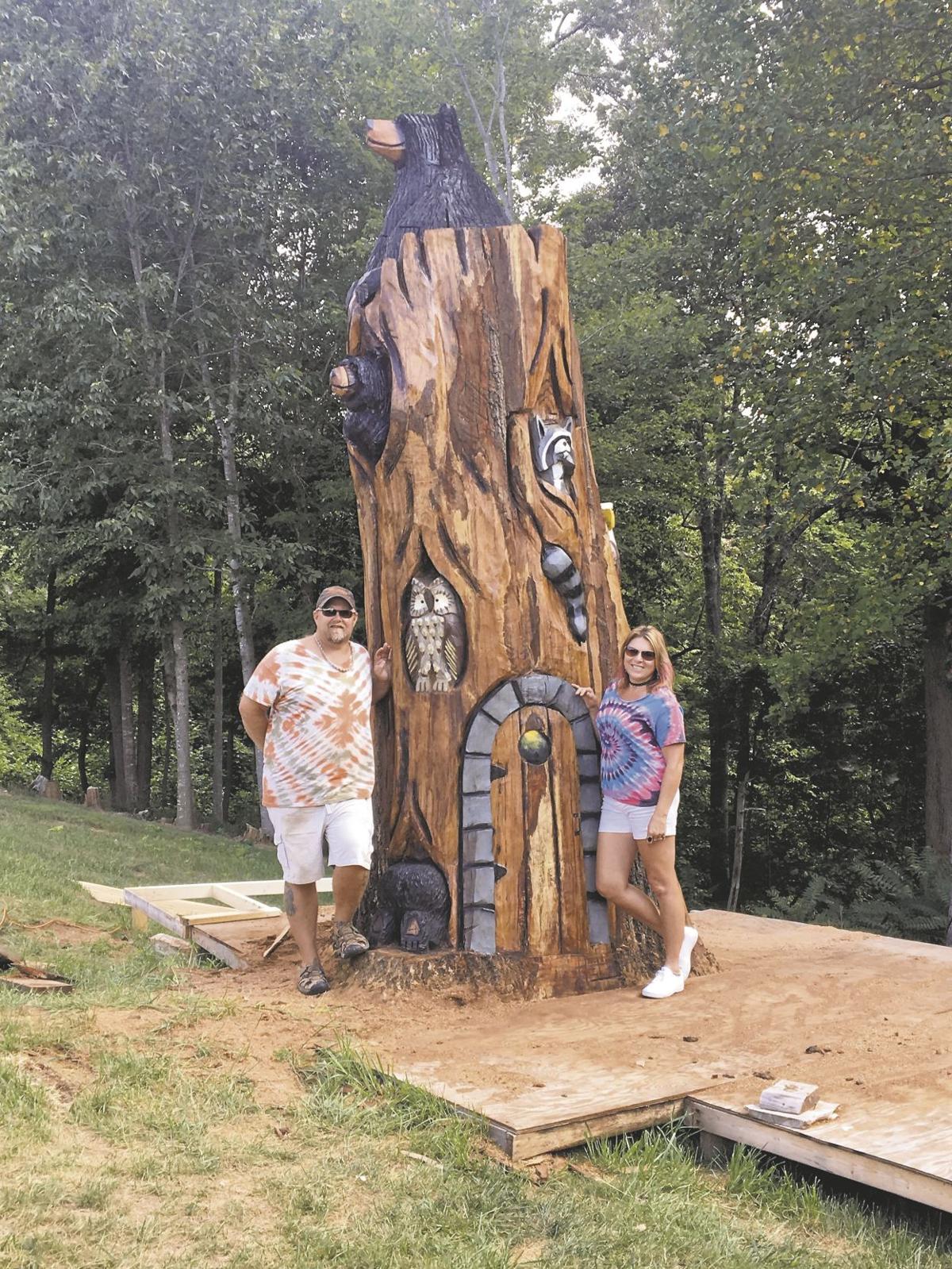 Dwayne and Lisa Hodges pose in front of their latest creation — a wood carving of a felled tree on the property of Sandy Mills in Boones Mill. Hodges estimates it to be the widest piece of chainsaw art he has ever made. 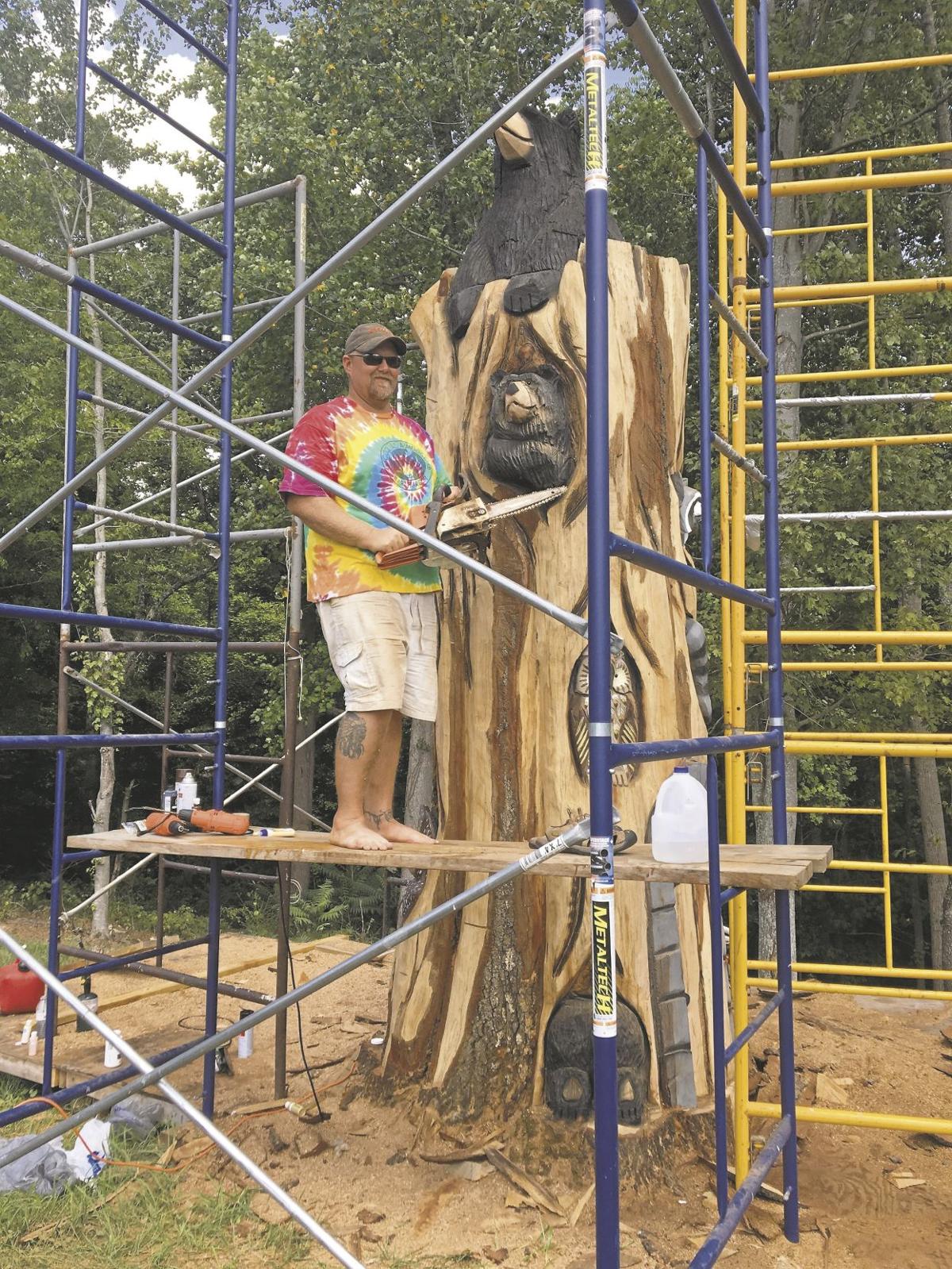 Dwayne “Woodchuck” Hodges stands barefoot on the scaffolding as he works on a 300-year-old oak tree that fell in the backyard of Sandy Mills in Boones Mill.

Dwayne and Lisa Hodges pose in front of their latest creation — a wood carving of a felled tree on the property of Sandy Mills in Boones Mill. Hodges estimates it to be the widest piece of chainsaw art he has ever made.

Dwayne “Woodchuck” Hodges stands barefoot on the scaffolding as he works on a 300-year-old oak tree that fell in the backyard of Sandy Mills in Boones Mill.

Dwayne “Woodchuck” Hodges was a 14-year-old on his way home from Franklin County High School one day when he spotted a man making a wood carving. The encounter made such an impression on the teenager that he decided from that day forward that wood carving was what he wanted to do the rest of his life.

Hodges grew up on a farm and used the locale to work on his carvings. Once he was finished with a project, he would take it into town and sell it. Honing his skills throughout his high school years, he graduated and opened his own shop in Boones Mill.

Hodges’ shop, Woodchuck Woodcarvings, still operates today. Hodges does all types of woodwork in any size — deftly operating a chainsaw while barefoot. He has carved animals, people, furniture, wood signs and more. Recently he faced his largest challenge yet.

Sandy Mills of Boones Mill had an ancient oak tree fall in her backyard. According to Mills and Hodges, the tree had to have been at least 300 years old. Mills was not home when the tree fell and no one was hurt.

“I didn’t see it fall, but it was heartbreaking when I came home to see it down,” Mills said.

The felled tree presented a new project for Hodges. When he and his wife arrived at Mills’ home, they realized the tree would become the widest piece of chainsaw art he had ever performed. The tree was so large it required three different sets of scaffolding and approximately one month to finish.

“This tree was huge,” Hodges said. “It took awhile. It’s different from most stuff that I do.”

Hodges is used to carving nature scenes, but normally there is only enough space for one scene. With Mill’s tree, several animals are present due to the extra large canvas. The tree is now home to multiple carved bears, a rabbit, an owl, a woodpecker, an eagle and a raccoon.

“Every time you look at the tree you see something different,” Mills said. “I’m just so proud to have it in my yard. It’s awesome.”

Lisa helps Dwayne with his projects and is in charge of detailing and painting.

The couple has been doing a fair amount of traveling lately to work on other projects. Their next work of art will send them to New Jersey to sculpt an eight-foot pink flamingo.

The furthest the Hodges have traveled for work is Oregon.

A few pieces on Hodges’ resume include a 12-foot sculpture of Jesus in Martinsville, a nine-foot tiger for the old Basset school, sea turtles, pirates, horses and more.

He also stated that a wood carving would be a “really good idea” when wondering what to do with a dead tree.