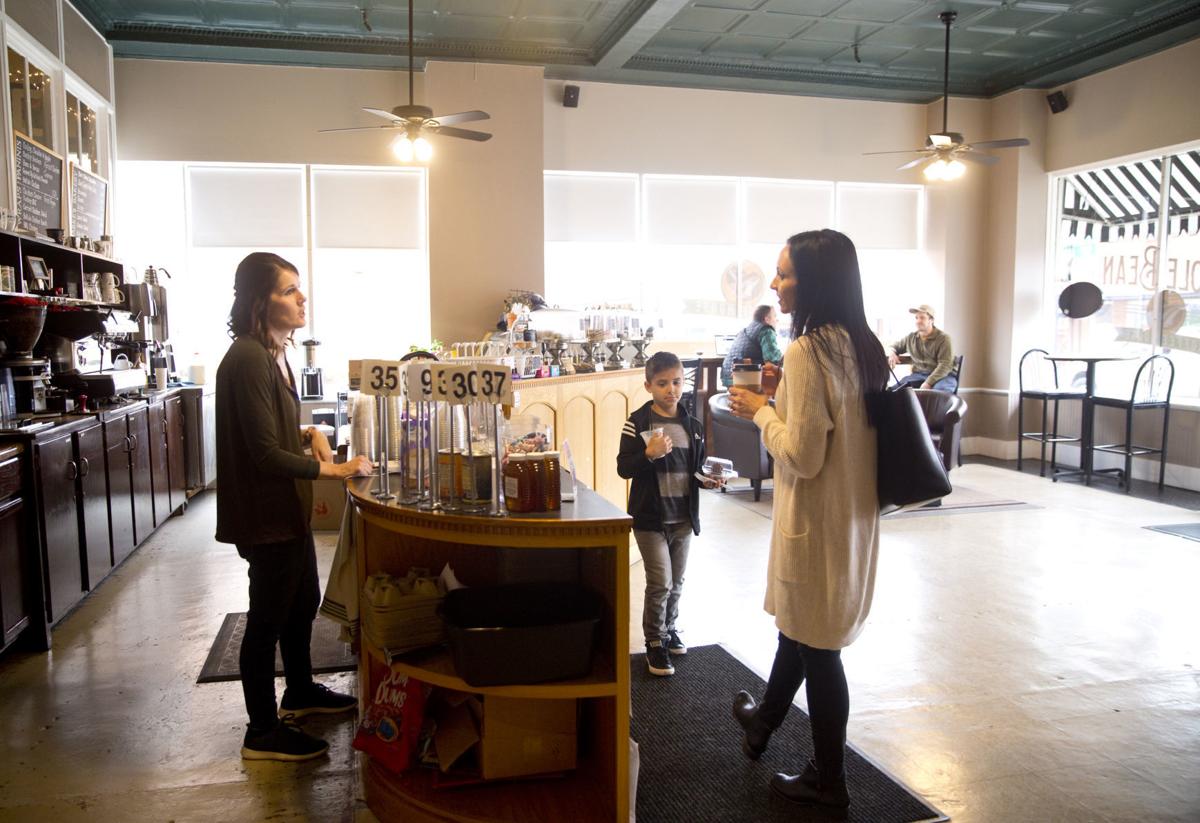 Kylee Robinson (left), owner of the Whole Bean Coffeehouse in downtown Rocky Mount, chats with Anna Crandall, who came into the shop with her son, Ryder Crandall, 7. Despite vacancies downtown, Robinson said her business is doing well. 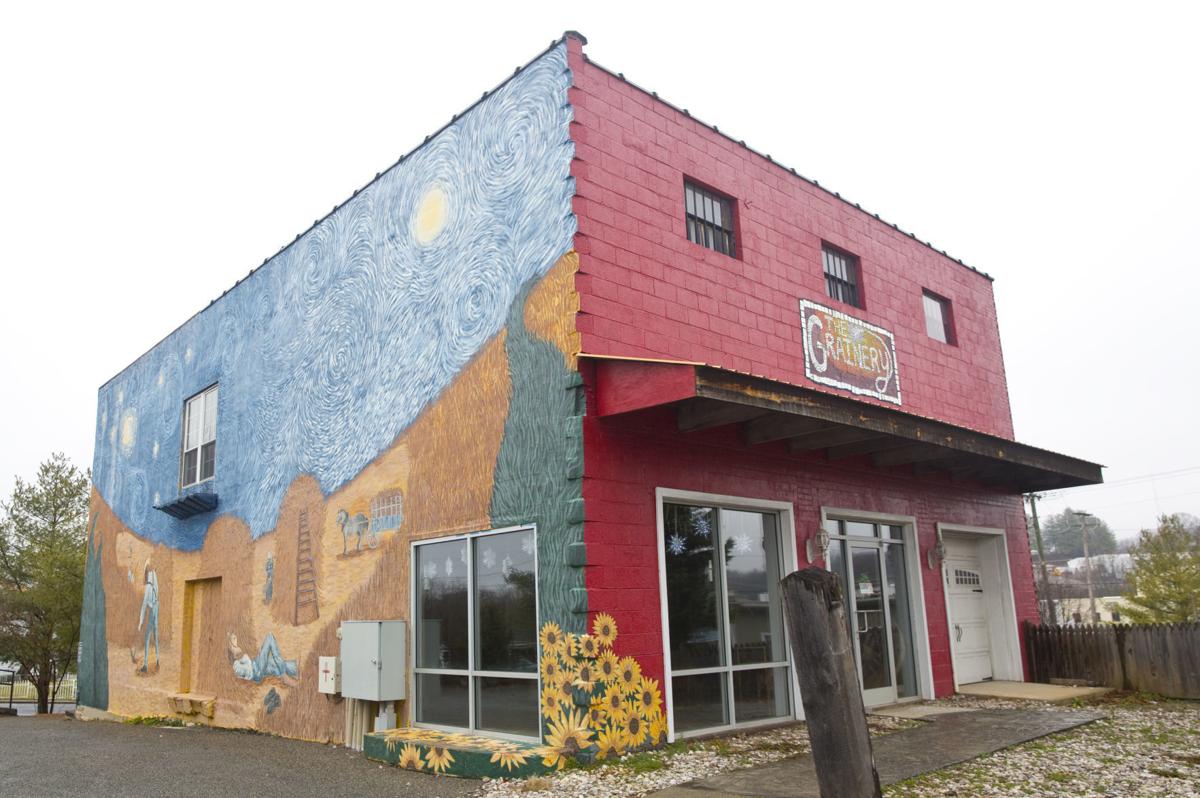 The Grainery, a former art space on Franklin Street in downtown Rocky Mount, was sold in 2018 and is currently vacant. 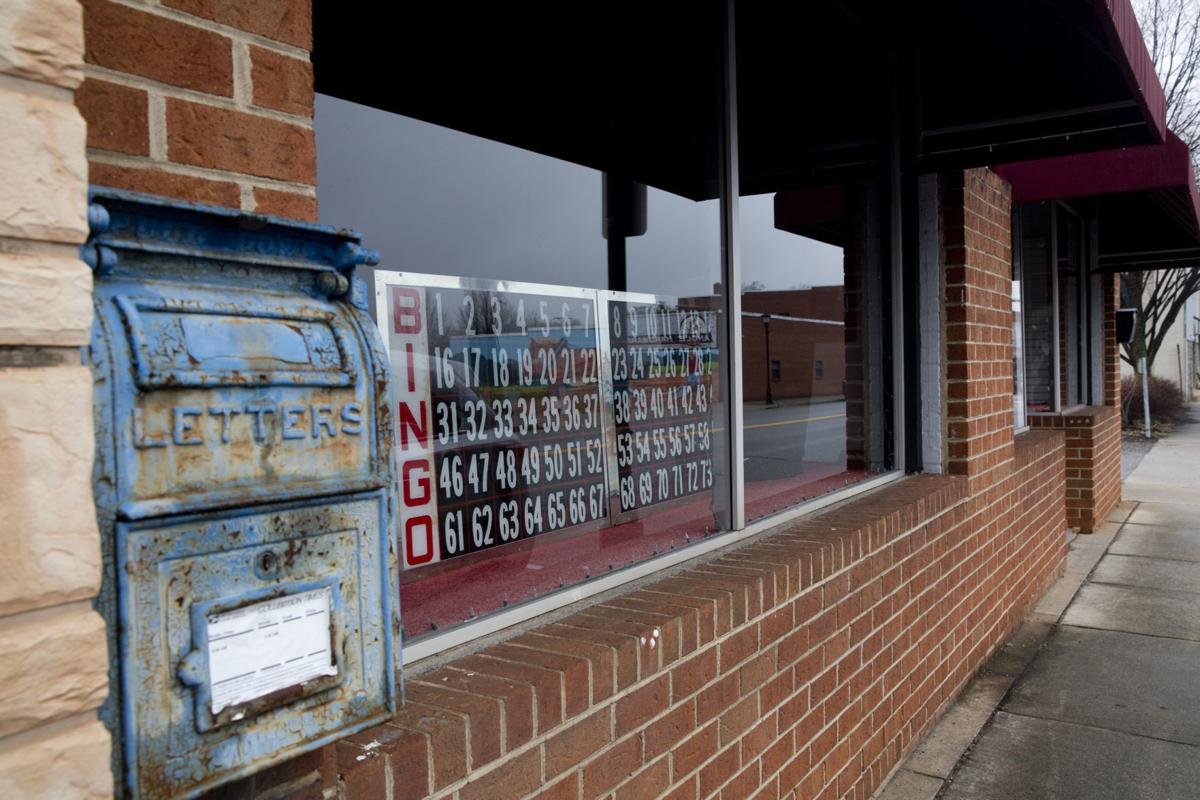 Old’s Cool, a vintage shop on Franklin Street, is among downtown Rocky Mount’s retail offerings. It’s next to the vacant J&J Fashions building. 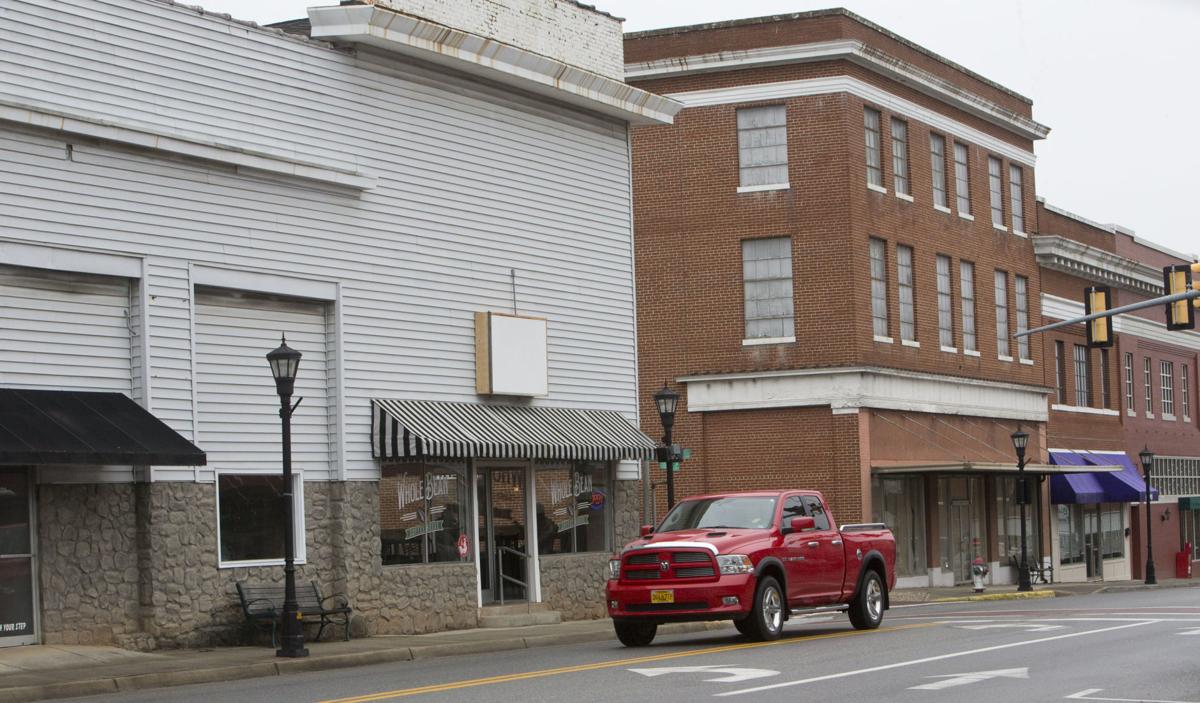 The Whole Bean Coffeehouse on Franklin Street in downtown Rocky Mount is located next to a vacant building. Though she’d like to see empty storefronts filled, coffee shop owner Kylee Robinson said her business has not been negatively affected.

Kylee Robinson (left), owner of the Whole Bean Coffeehouse in downtown Rocky Mount, chats with Anna Crandall, who came into the shop with her son, Ryder Crandall, 7. Despite vacancies downtown, Robinson said her business is doing well.

The Grainery, a former art space on Franklin Street in downtown Rocky Mount, was sold in 2018 and is currently vacant.

Old’s Cool, a vintage shop on Franklin Street, is among downtown Rocky Mount’s retail offerings. It’s next to the vacant J&J Fashions building.

The Whole Bean Coffeehouse on Franklin Street in downtown Rocky Mount is located next to a vacant building. Though she’d like to see empty storefronts filled, coffee shop owner Kylee Robinson said her business has not been negatively affected.

On a damp gray morning in downtown Rocky Mount, the Whole Bean Coffeehouse is bustling. Customers pop in to warm up with a cup of coffee or hold a book club meeting.

But few other storefronts along Franklin Street match the activity at the coffee shop, which opened in late 2016. Several feature for sale signs or windows covered with paper.

With a number of prominent commercial properties vacant or on the market, Rocky Mount’s quaint downtown is poised for transformation.

The longtime home of J&J Fashions has been empty since the owner of the women’s clothing store moved all operations to its Roanoke County location in 2018.

Two adjacent Franklin Street buildings, which together total more than 15,000 square feet, have been listed with Cushman & Wakefield | Thalhimer. One is vacant and the other is in partial use.

A former furniture store at the corner of Franklin Street and Claiborne Avenue that was at one time pitched as a hotel and restaurant remains vacant. Although a special-use permit that would allow the project to move forward was approved by the town council, no work has begun.

The Grainery building, a former art venue recognizable by its mural reminiscent of Van Gogh’s “Starry Night,” was sold in 2018 but the new owners have not yet made their plans for the property public.

Matt Hankins, the assistant town manager, said he believes some of this turnover can be attributed to the fact that the Harvester Performance Center has made downtown commercial space more valuable. He suspects that’s prompting owners to sell their properties or pursue other uses.

“We want folks to be able to sell their property for more than they bought it for, even if that means we have a vacant storefront for a few months before we have a new and higher use,” Hankins said. “Ultimately it winds up being good for the town.”

Information from the commissioner of the revenue shows the town of Rocky Mount had some of the greatest gains in the county, with the assessed value of real estate rising by 6.8%.

Strong attendance numbers at the Harvester are a draw for new businesses and indicate a potential audience, Hankins said, particularly for a restaurant or bar. He noted additional art developments, like a new mural on the Angle Hardware store, designed to make the area more attractive and encourage people to get out of their cars and walk around.

“I think 2020 is shaping up to be a good year of interest for the properties we have downtown,” he said.

The 7,000-square-foot J&J Fashions building is listed with RE/MAX Mountain to Lake Realty in Rocky Mount. Owner Billy Kingery said the property is of course well-suited for retail, but it could also be turned into a restaurant, or the upper level converted into apartments.

He noted the building’s proximity to the Harvester, library and farmers market. It has not only street parking, but also additional spaces in the back.

The space has generated interest — it was even under contract at one point — but a buyer has not yet surfaced. It’s listed at $250,000.

“There’s a buyer for every property,” Kingery said. “You’ve just got to find the right one.”

Just down the street is the Whole Bean Coffeehouse. Owner Kylee Robinson said she doesn’t feel that her business has been negatively affected by vacancies on Franklin Street. But she’s still disappointed by the empty storefronts.

“Rocky Mount is trying so hard to grow and for the downtown to thrive, that when these businesses move in and out it’s a little bit discouraging,” Robinson said.

She hopes the available spaces will be filled by businesses that encourage people to walk around downtown — like retail or art spaces — rather than offices.

From her experience, Robinson said, Rocky Mount offers business owners a charming small-town feel along with a loyal and friendly customer base.

Phillip Bane is the owner of the vacant building proposed for lodging and dining, which would address two of Rocky Mount’s greatest needs. Bane, of Roanoke, purchased the building in 2014 for $210,000.

“It is unfortunate if you drive through downtown Rocky Mount, there’s a lot of buildings that are either vacant or for sale,” he said.

But Bane said he’s not planning to move forward with his project until some kind of tax abatement program is put into effect.

“You can’t really afford to be the first person to renovate a building and then get hammered with taxes out of the gate,” Bane said. “Rocky Mount’s not there yet.”

Hankins said town staff is exploring this and would initiate talks with the county. The town could create its own tax abatement districts, but savings at the county level, which has a much higher tax rate, would be more lucrative for developers.

Michael Burnette, Franklin County’s economic development director, said he was not aware of any conversations about a tax abatement program. But he said the county would consider partnering with the town on incentives to support local businesses, taking into account “what makes financial sense from a tax revenue standpoint.”

Burnette said he feels there is significant opportunity in downtown Rocky Mount, driven in large part by the Harvester. Restaurants and retail in particular could capitalize on that traffic, he said.

Since opening in 1953, Haywood’s Jewelers has seen many businesses come and go in downtown Rocky Mount, said owner Harold Ingram.

He credits his store’s longevity to its good service. But it could still benefit from more people meandering around downtown.

“We definitely need new business, but it’s hard for a business today to survive,” he said.

Ingram would like to see more retail on Franklin Street, which he believes would “give the customer more reasons to come downtown.”

Between The Grainery and Franklin Glass, two side-by-side buildings — 224 and 230 Franklin Street — are on the market. They are available for lease or sale and could be bundled together. One is listed at $789,000 and the other at $235,000.

The smaller of the two — a 3,600-square-foot building formerly occupied by Arrington Sports and Awards Screenprinting — is vacant. It’s well-suited for a restaurant concept, said Jessica Johnson, a vice president with Thalhimer.

The larger building has an antique store on the first floor, while the upper level once housed a dance studio. Johnson said it would make for good office space or a medical or dental use. Wyatt Poats, an associate with Thalhimer, said the building owner is also connected to the antique store, providing flexibility for its future.

Poats said interest in the properties has picked up recently. Different user groups have made inquiries, he said, but declined to go into more detail.