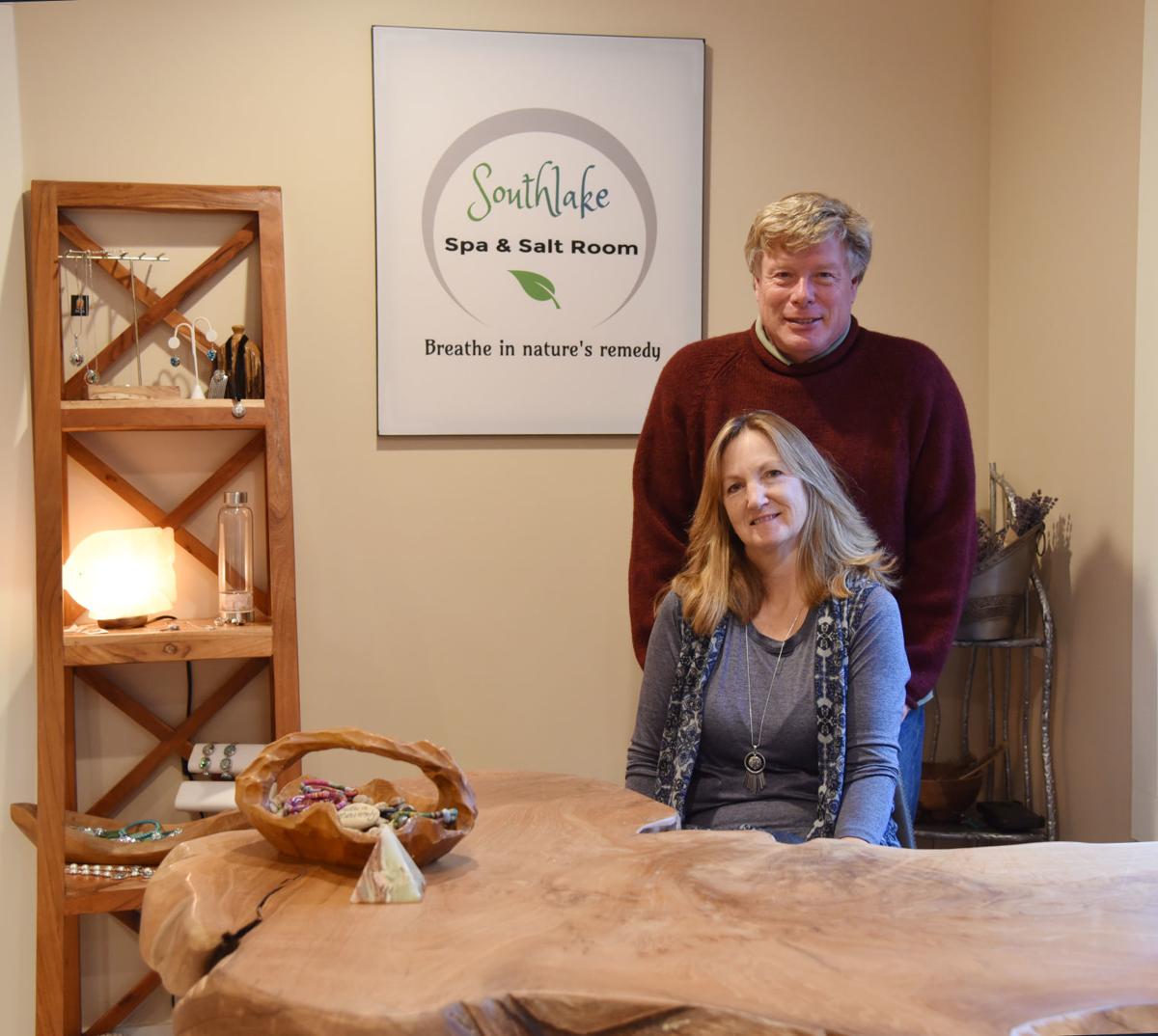 Moved by the family’s experience with Halotherapy, Union Hall residents Lori and Jeff Dupier wanted to create a natural space to offer the public the holistic therapy. 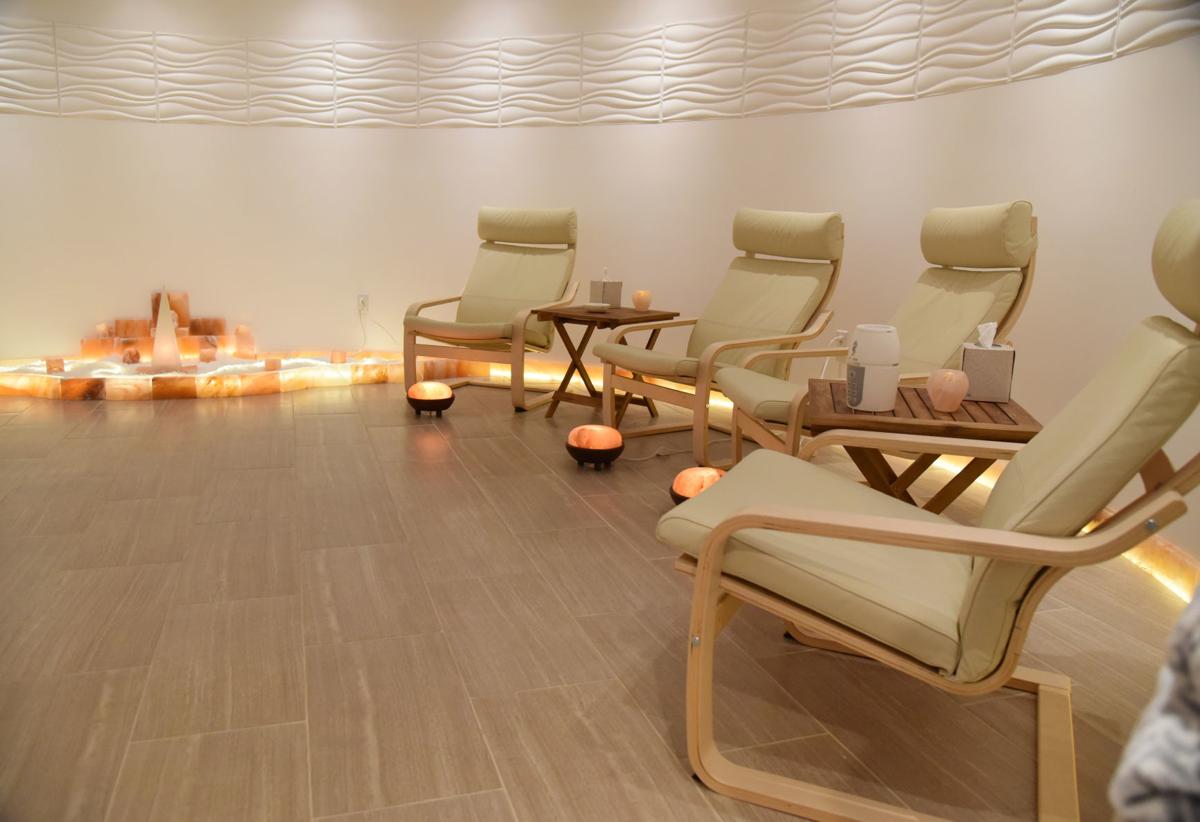 The main salt room at Southlake Spa and Salt Room seats up to eight people.

Moved by the family’s experience with Halotherapy, Union Hall residents Lori and Jeff Dupier wanted to create a natural space to offer the public the holistic therapy.

The main salt room at Southlake Spa and Salt Room seats up to eight people.

Franklin County has a new kind of spa opening in Union Hall today.

Southlake Spa and Salt Room will focus on health and wellness as opposed to a beauty salon spa. The spa was built to house a salt room for dry salt therapy or halotherapy. Halotherapy uses a halogenerator to grind and crush salt into micronized particles that are dispersed in the salt room by way of an aerosol to aid respiratory concerns, as well as some skin conditions.

The creator of the machines tested the spa several times to be sure the saturation level was optimum. Southlake Spa and Salt Room is also a member of the Salt Therapy Association. Salt therapy is a natural alternative treatment to help respiratory conditions such as asthma, COPD, bronchitis, allergies and sinus issues.

“We have exhaust fans in all of our therapy rooms so we exhaust everything out afterwords,” said spa owner Lori Dupier. “The respiration and the salt, so it doesn’t get recirculated.”

Sessions in the salt room are typically 30 minutes and will be priced at $22 per session. Dupier said she is still working out final details for packages but they will be available for purchase as well.

Dupier, who owns the spa with her husband, Jeff, said the idea for the salt room came about because Lori Dupier’s mother has COPD, and they were searching for alternative therapies to help her breathing. After deciding to build a salt room the couple decided to build one they could open to the public.

Located on the family farm in Union Hall, access to the spa is gained after a short drive down a dirt road and a turn into the woods. There, a renovated 1985 grain bin is the centerpiece of the spa where the salt room, which can seat up to eight people, is located on the ground floor of the building.

“We were originally just going to put (the grain bin) up here on this property and use it as a multi-purpose building,” Jeff Dupier said. “But it morphed from a family-use building to a public-use building.”

A second floor was built for yoga classes and studio space. The building also features a private salt room for two two and massage chairs, as well as a private massage room with a table.

Currently, the Dupiers are looking for a massage therapist or two to be able to offer massage services.

Jeff Dupier said the endeavor took a little more than two years from the time they broke ground to the time they received their occupancy certificate.

The Dupiers also grow lavender on the farm and have a winery. Lori Dupier is a yoga instructor and said yoga classes will be offered not only in the spa, but also on the grounds, including in the lavender fields. She is also exploring the idea of offering goat yoga since the family has goats.

During construction of the facility, the Dupiers said they wanted to be environmentally conscious, so they took care to use low VOC (volatile organic compound) materials such as paints and bamboo flooring.

Because the spa’s focus is on health and wellness, Lori Dupier said there are currently no plans to include hair and nail services.

“It’s very hard to do hair and nails without chemicals,” she said. “Many people come for maintenance and staying healthy, but if someone actually has a respiratory condition, they don’t want to be near the smells of nails and hair, because unfortunately, most of it is pretty toxic.”

Plans for walking and meditation trails are in the works on the property as well.

“We want the experience of coming here to start with the little dirt road, and decompressing coming up into the woods,” Lori Dupier said. “We will have an outdoor fountain and sitting areas outside.”

Herbal gardens and a variety of workshops, from health education to tea making, are also in the planning stages.

Information about coming classes or events will be posted on the spa’s Facebook page or at www.southlakesaltroom.com.