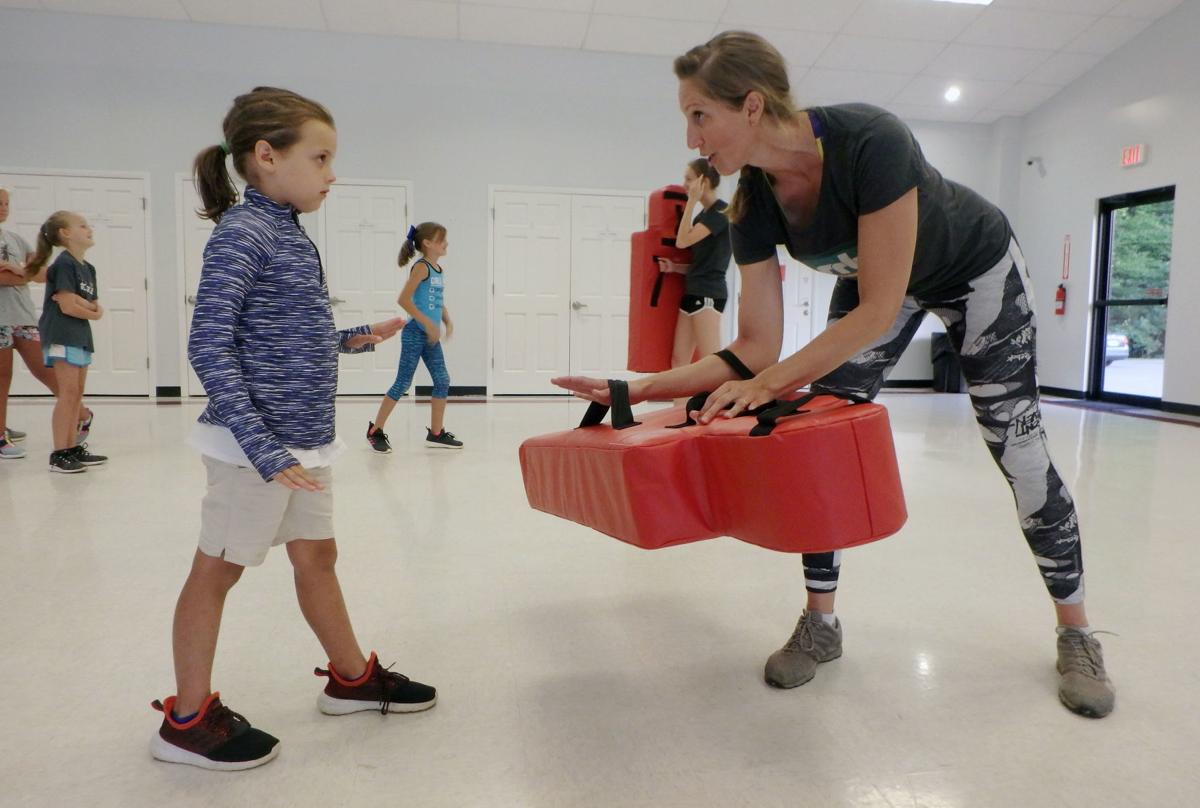 Sutton Lang, 7, works with Tara Holley at a self-defense class to raise funds for the Stephanie Bennett Memorial Scholarship Fund. 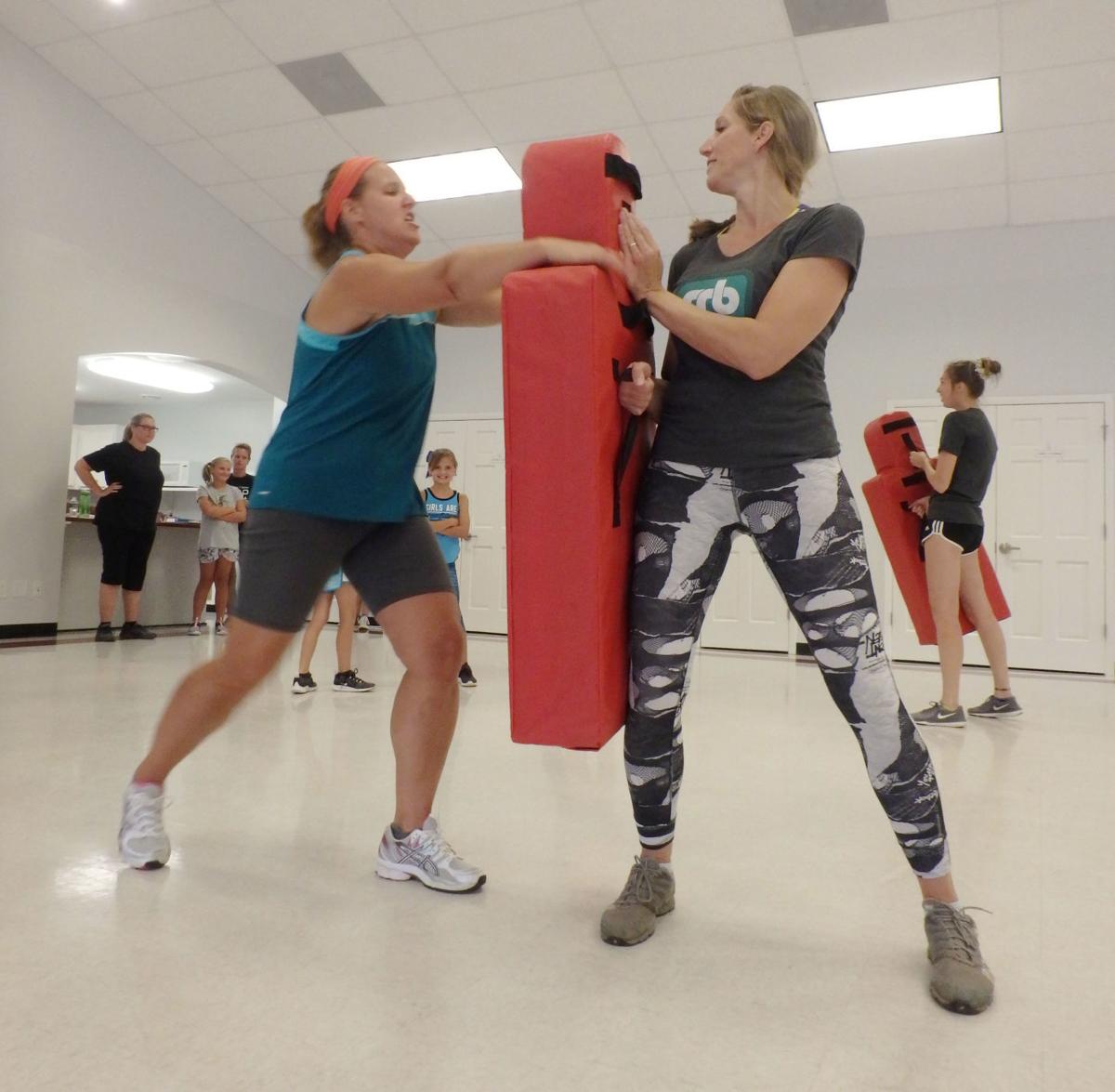 Rose Weaver (left) gives it everything she has at a self-defense class taught by Tara Holley as a fundraiser for the Stephanie Bennett Memorial Scholarship Fund.

Sutton Lang, 7, works with Tara Holley at a self-defense class to raise funds for the Stephanie Bennett Memorial Scholarship Fund.

Rose Weaver (left) gives it everything she has at a self-defense class taught by Tara Holley as a fundraiser for the Stephanie Bennett Memorial Scholarship Fund.

More than just money for the Stephanie Bennett Memorial Scholarship Fund was raised last Wednesday at the Shively Electric Community Room in Rocky Mount. The confidence level of nearly 50 women and young girls was raised through self-defense classes.

Tara Holley instructed the classes. She said her family and the Bennett family have always been close.

“I am thankful Deanna [step-sister and classmate of Bennett’s] asked me to be a part of such a wonderful celebration of what would have been her 40th year of life.”

Bennett, a 1997 Franklin County High School and 2001 Roanoke College graduate, died following a violent assault in her Raleigh apartment in May, 2002. Shortly after her death, a scholarship fund was established in her memory. The fund has awarded 15 scholarships since 2003 totaling $98,500. Each year a $7,500 scholarship is awarded to a FCHS senior who plans to attend Roanoke College.

Christina Gibson, who attended the event with her 10-year-old daughter, Lera, shared some memories about Bennett, a former classmate.

“Stephanie was a kind, dependable and fun-loving friend who was always willing to help out a friend at any time,” Gibson said. “Her spirit was contagious to all around her, which usually results in lots of laughter and good memories.”

To honor her memory, her classmates arranged to hold one-hour self-defense classes. Students ranged in age from elementary school to adult, with a number of mothers attending with their daughters.

Gibson said at least four of the elementary-aged girls attending were with their mothers who were friends of Bennett’s.

Gibson said the event committee believed the event was a huge success on many levels.

“While we were able to raise $3,000 for the Stephanie Bennett Memorial Scholarship Fund, the most inspirational part of the fundraiser was watching each and every girl, teen and woman who attended walk out with a sense of empowerment,” she said.

“Tara Holley and her daughter, Julia, did an amazing job of teaching those who attended about awareness and prevention of unnecessary attacks, as well as specific moves that can be used to fend off an attacker, if necessary.”

Gibson also added, “When we walk through a parking lot [Lera] is now reminding me of how to walk confident, to reduce distractions and always make sure I am aware of my environment.”

Holley said she also thought the event was well-received by the participants. She got good feedback about it being informative and fun.

“The most rewarding part is when a participant feels empowered from the information they get from me,” she said.

In preparation for college, Holley felt it was important for her daughter to have thorough self-defense training during her high school years.

“I didn’t want her to be a part of those overwhelming statistics that one in five college women are assaulted,” Holley said of her daughter.

Of the class, participant Eva Armes said, “It was fantastic. Everybody needs to do this.” She said she attended the class “in memory of Stephanie. I love her and share the same birthday, just 10 years apart. Her family is near and dear to us.”

Gibson said she hopes to host the fundraiser will help booster the scholarship fund and help women in Franklin County be more empowered.

Holley added, “I have a passion for sharing self-defense skills and hope I can continue to do more in the future.”