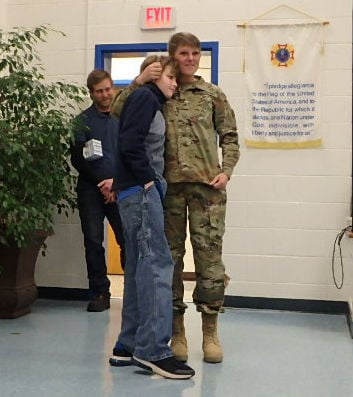 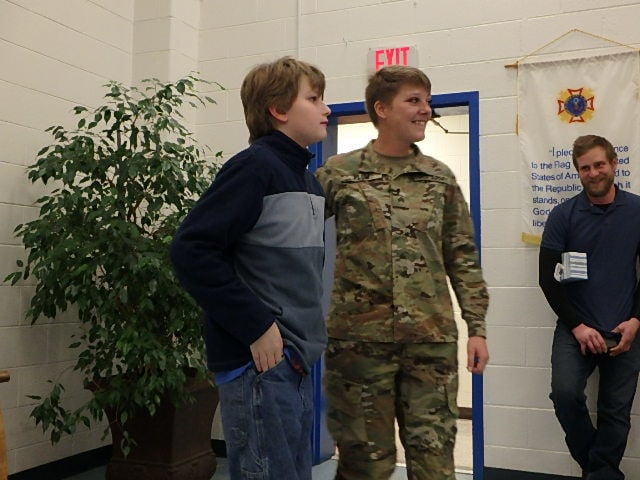 Sgt. Kelsey Plum, of the U.S. Army reserve, surprised her fifth-grade son, Denver Meadows at Callaway Elementary School Jan. 31, by returning earlier than expected from a 10-month deployment to the Middle East.

Sgt. Kelsey Plum, of the U.S. Army reserve, surprised her fifth-grade son, Denver Meadows at Callaway Elementary School Jan. 31, by returning earlier than expected from a 10-month deployment to the Middle East.

Expecting to receive a book, Callaway fifth-grader Denver Meadows received a hug from his mother whom he thought was on the other side of the world in the Middle East.

Wearing her uniform, Army Reservist Sgt. Kelsey Plum surprised her son last Friday morning at an assembly at the elementary school by returning from deployment a couple of weeks early.

Plum called Callaway Principal Pam Brown a few days before her return and a plan for the reunion was devised. The school already had an assembly planned for Thursday afternoon, which had been rescheduled for Friday morning.

Brown said she was happy to facilitate the reunion. “I’m a mom, too. I can’t imagine 10 months away.”

The timing for the event was ideal, a great finale for an assembly that showcased one surprise after another. The original assembly was scheduled as a surprise book giveaway to benefit classroom libraries and was tied in with the Scholastic Book Fair taking place in the school library that week.

First, every teacher received the 10 books they had put on their wish lists for books in their classrooms. Also, 30 of the school’s 225 students received a book of their choice from the book fair.

As the final student’s name was about to be called, a hush came over the excited crowd gathered in Callaway’s cafeteria.

As mother and son embraced, the crowd cheered, and brought tears to the eyes staff members.

After the assembly, mother and son got to reconnect. Meadows said he missed his mom “from here to the very last star of the galaxy” and that he couldn’t explain it in words.

Plum said the last week felt like the longest week of her life and that she has missed her family, husband and children so much.

“I am so proud,” Plum said. “I have such an amazing support system. They took care of my family when I was gone.”