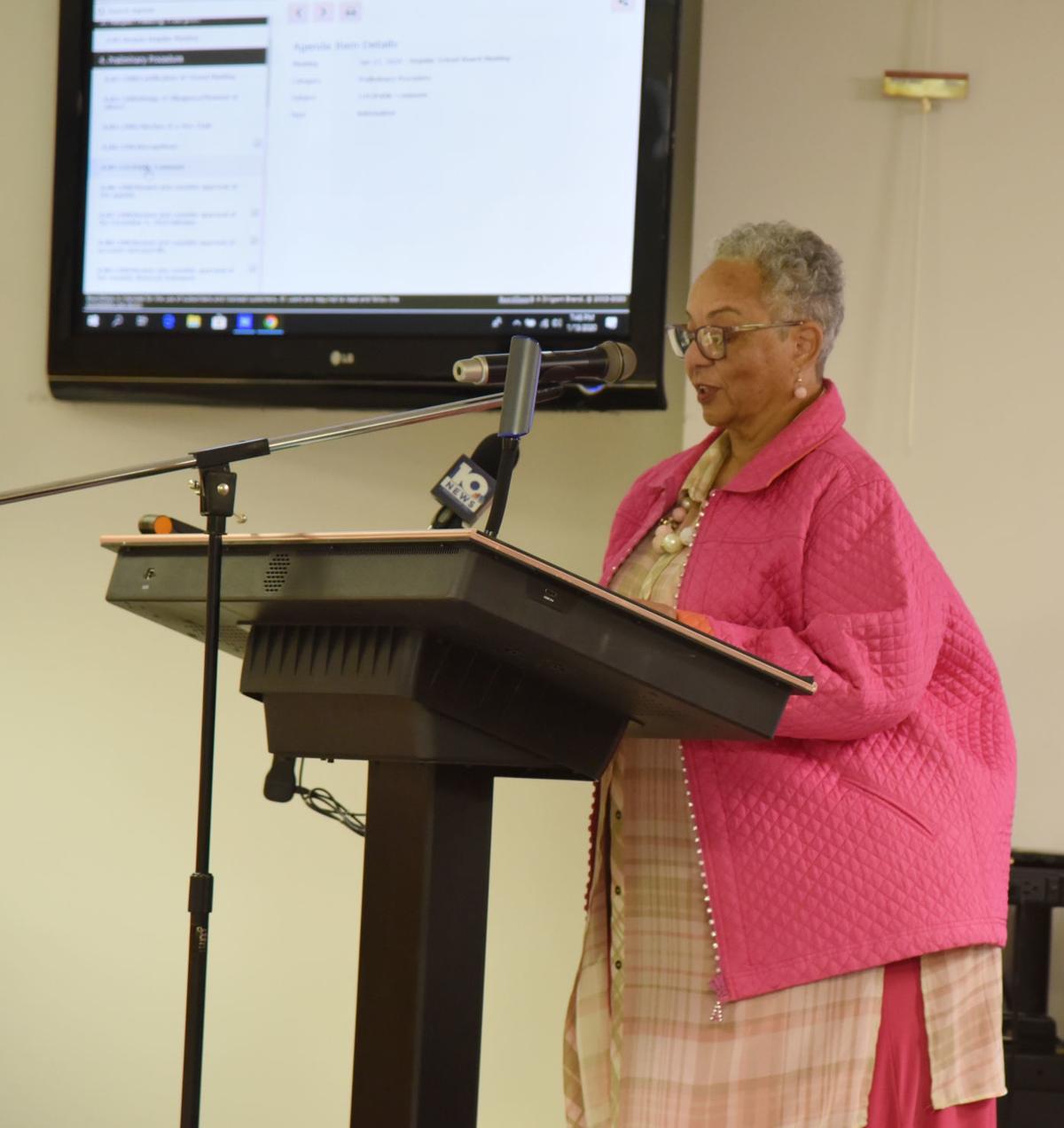 Union Hall resident Ruby Penn said some school board members were “hiding behind the First Amendment” in their decision not to ban the Confederate flag. 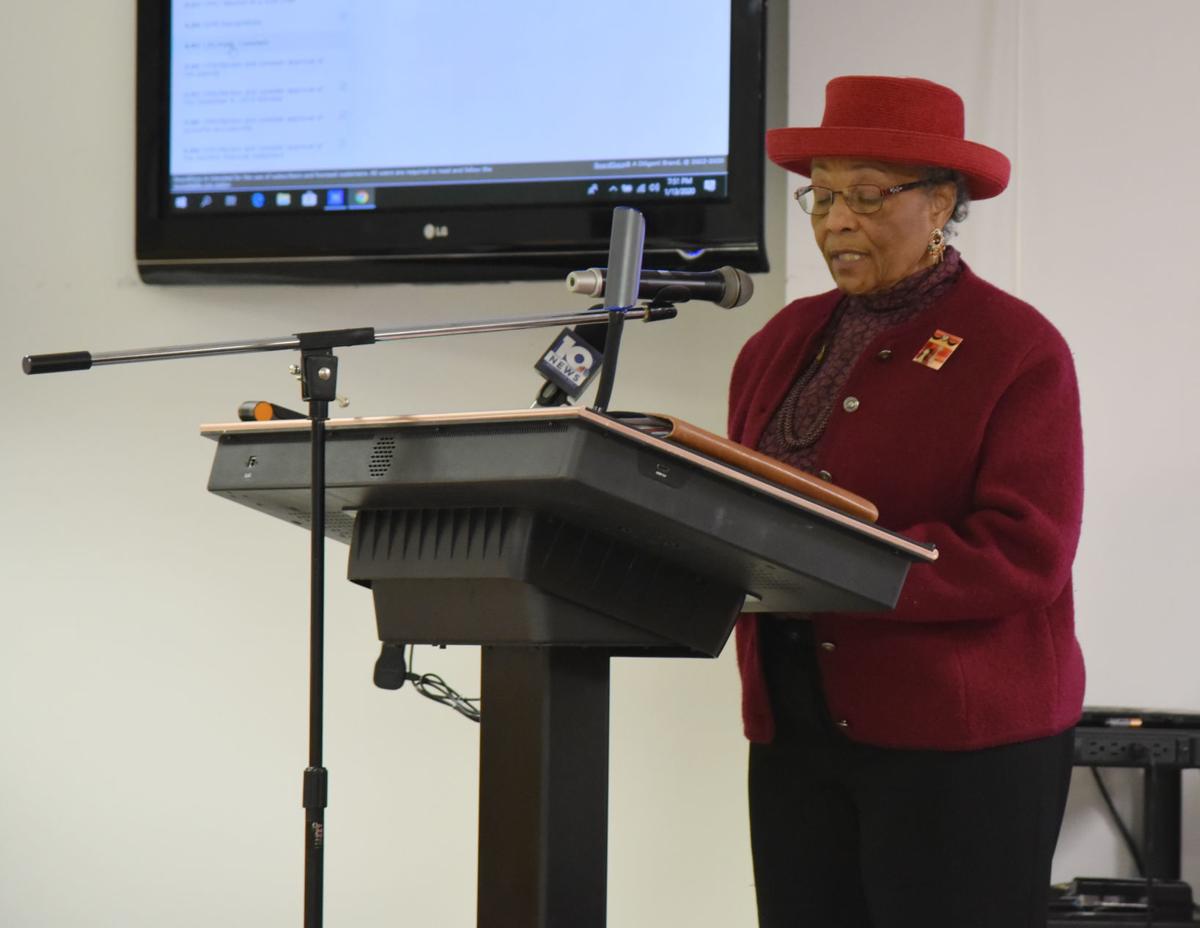 Gloria Freeman Martin said the Confederate flag is a symbol of white supremacy and called upon school board members to ban the flag from Franklin County Schools.

Union Hall resident Ruby Penn said some school board members were “hiding behind the First Amendment” in their decision not to ban the Confederate flag.

Gloria Freeman Martin said the Confederate flag is a symbol of white supremacy and called upon school board members to ban the flag from Franklin County Schools.

Last fall, parents raised concerns about the required length of hemlines, claiming it was difficult to find skirts and shorts for students that would meet the code.

However, in October, as the board was examining revisions to the dress code, board member at-large Penny Blue said she felt the Confederate flag should be banned under the clause that stated, “Clothing may not depict discriminatory, obscene or hate speech imagery.”

During Monday night’s meeting she moved to include the language: “Examples include the Confederate flag. This list is not intended to be all inclusive.”

The movement failed in a tie vote, 4-4, with Jon Atchue, G.B. Washburn, Jeff Worley and Blue voting in favor of including the verbiage, and Donna Cosmato, Arlet Greer, P.D. Hambrick and Julie Nix voting against the measure.

Cosmato had said at previous meetings that she was concerned about infringing on the rights of students’ free speech and not wanting to place the school district in a position to be sued.

Several members of the community provided impassioned pleas to the board to ban the flag over the past several months and Monday night’s meeting was no exception.

Sherman Witcher, a Rocky Mount resident who also spoke at the December meeting, again pleaded with board members to ban the Confederate flag saying it was about respect.

“This is all the black people want, is respect,” Witcher said. “The flag is disrespectful. I don’t know why you don’t get that. Lincoln got it.”

Retired professor and Union Hall resident Gloria Freeman Martin said the flag is a symbol of white supremacy and a recognized hate symbol.

“It is the obligation and responsibility of educators to create a safe learning environment; some schools can only be what they should through policies, which speak to moral and ethical issues of affirmative action,” Martin said. “I hope more vigorous or violent actions are not necessary just to get an annoying, destructive, esteem-dampering for African Americans, and bullying, bolstering, pride-building, white supremacist Confederate flag out of the Franklin County Public Schools.”

Former school board member Charles Jamison said he respected and appreciated everything that has been said on the issue.

“It brings up a painful past,” Jamison said. “But it is the past, and we have to learn from the past. There is a risk in defining specific areas you wish to ban.”

He explained that letting personnel define, on a case–by-case basis, what is offensive can be slippery slope. Blue agreed with Jamison.

“The slippery slope that I believe we are going down is that, if we are too general, and every teacher and every principal has such subjectivity, and we’re not consistent, that’s the slippery slope,” Blue said.

She said that previous legal advice from Franklin County Public Schools’ Attorney Steve Maddy was based on the 1969 Supreme Court case Tinker vs. Des Moines Independent School District and outdated. She cited a ruling from the 2013 Hardwick vs. Heyward case, heard in the U.S. Fourth Circuit Court that concluded a South Carolina school district did not violate the free speech rights of Candice Hardwick when it prohibited her from wearing a number of shirts that depicted the Confederate flag over a period of three school years.

Maddy said the Tinker ruling was from a higher court and as a Supreme Court ruling would take precedence despite the more recent ruling.

Cosmato’s husband, Patrick, showed support for his wife’s view on not changing the dress code, stating the policy already in place was adequate. “Nothing needs to be banned,” Patrick Cosmato said. “If you go down that road, it’s a slippery slope. I would urge those who want to walk around on this earth spring-loaded in the offended position, please just get over it.”

Once Blue’s motion to amend the proposed revised dress code failed, the board then voted on the revisions as originally brought before them. The dress code, as written, stated that shorts, skirts and dresses may not be more than 3 inches above the knee while standing. The revised code amended the length 2 inches to be no more than 5 inches above the knee.

Franklin County Schools Superintendent Mark Church said the new code, which passed by a vote of 7-1, also generalized the rules for male and female students such as requiring clothing to cover chest, back and shoulders. The former dress code policy listed clothing rules specific to male and female.

In other business, the board scheduled a workshop for Jan. 27 at 6 p.m. to decide how to move forward with the search for a new superintendent. Church announced in December he would retire in August. The board agreed to fill the position by July 1 to allow the new superintendent time to transition into the role.