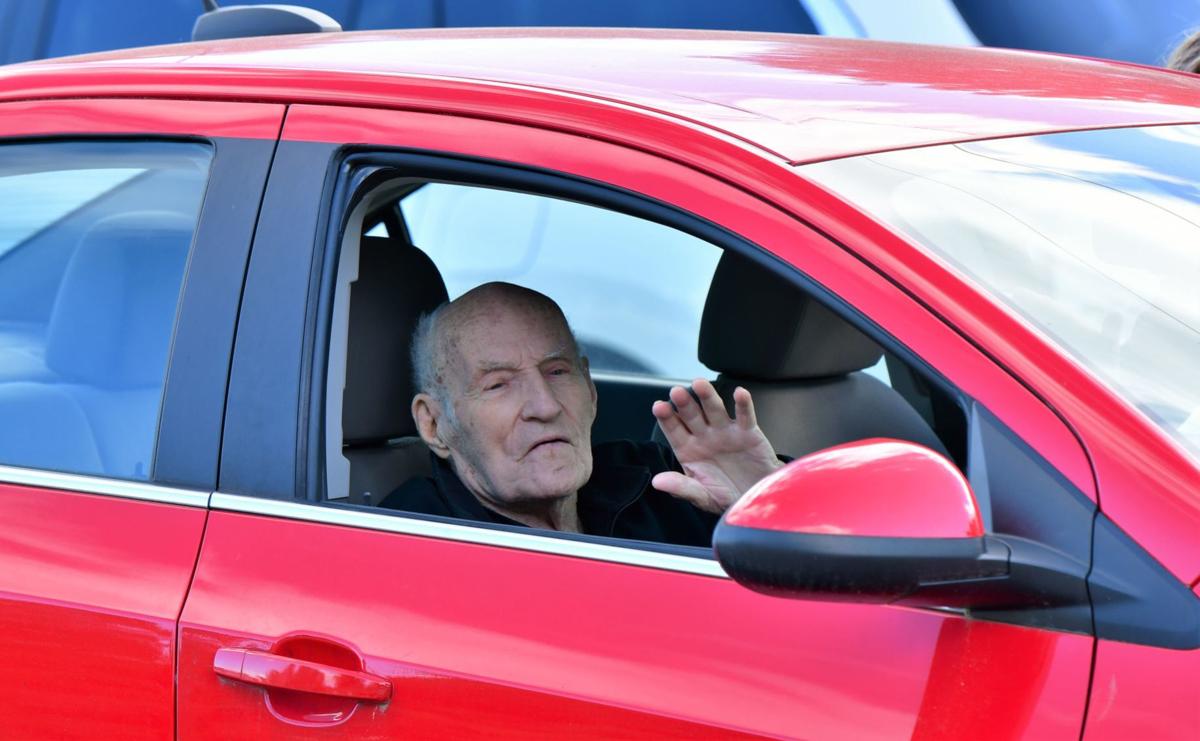 Buford Harrison sits in a vehicle at the end of his driveway as dozens drove by to wish him a happy birthday in a pandemic-style motorcade. 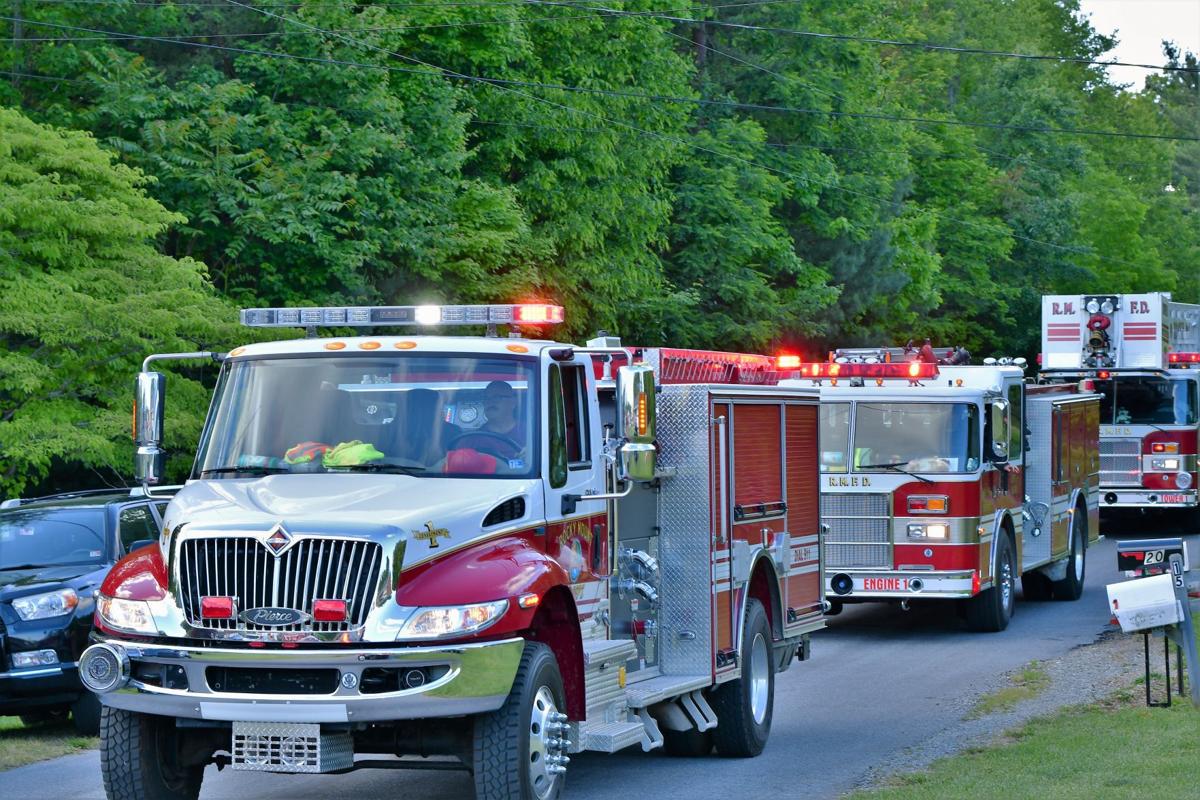 Dozens of law enforcement, fire and classic cars paraded past the Rocky Mount home of Buford Harrison for his 95th birthday. 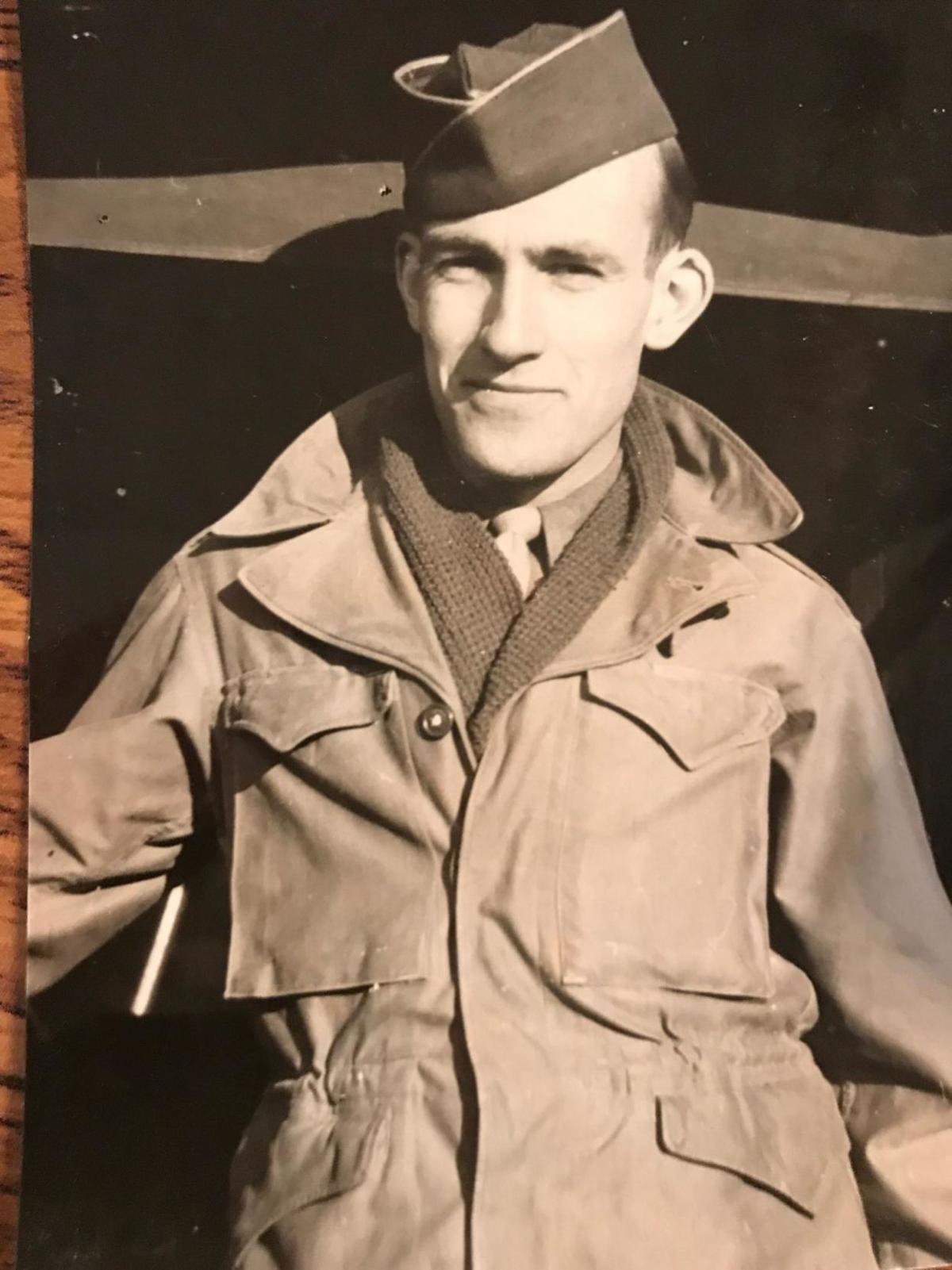 Buford Harrison sits in a vehicle at the end of his driveway as dozens drove by to wish him a happy birthday in a pandemic-style motorcade.

Dozens of law enforcement, fire and classic cars paraded past the Rocky Mount home of Buford Harrison for his 95th birthday.

The motorcade parade was to honor Harrison’s 95th birthday. Despite the COVID-19 pandemic, Harrison’s friends and family wanted to throw him a birthday party. Approximately 60 vehicles participated with nearly 20 of them from the sheriff’s office, police and fire departments, as well as antique cars. As friends from the community drove by his home, with Harrison in a car in his driveway, some stopped to hand him cards and gifts.

The procession was led by Franklin County Sheriff Bill Overton. Overton got out of his car to see Harrison and said, “The Office of the Sheriff is honored to be here today celebrating this wonderful event with you, Buford. You have served this county in many ways, as a magistrate for many, many years and a volunteer member with the Rocky Mount Fire Department. You are a friend to our office and to myself. Ninety-five years old today, what a tremendous blessing. Thank you, Buford, for letting us be a part of this moment.”

Harrison was surprised by the celebration and later in the evening said to his daughter, Sandra Siak, “It was just so nice. I think I want to live another 10 years.”

Joining Harrison and Siak were his three grandchildren and two great-grandchildren. As a nonagenarian, he has outlived two wives and one daughter. Harrison’s recommendation to young people on how to live a long and good life includes the following advice: “Be kind to everybody.”

To what does he attribute his long life? “Thanks only to God,” he said.

Harrison grew up in Rocky Mount, the son of George and Anna Harrison. His father made furniture at Bald Knob Furniture in Rocky Mount, which later became Lane Furniture. His mother was a homemaker. He had an older sister, Lena Harrison Adams, who was a friend of Elizabeth Webster who turned 100 years old last Sunday.

Harrison graduated from Rocky Mount High School and while in school, played basketball and baseball and worked part-time at Angle Grocery.

In 1943, at age 18, and a few months out of high school, Harrison was drafted into the Army where he became a T-4 Sergeant. After training at Fort Lee and in Illinois, he was sent to Europe where he served in France, Ireland, Germany, Belgium and Yugoslavia as a combat medic.

He emotionally described his worst war experience as being in Germany at the Belgium breakthrough: ”Seeing soldiers being wounded beside you dropping from gunfire and having limbs blown off ... not something I ever want to see again.”

Harrison said the carnage and the fallout didn’t just extend to the U.S. soldiers.

“If you found a wounded German, you helped them just like you’d help your own soldiers,” he said. “That’s how my outfit was run. Most people could never understand unless you were there. Worst memory ever. No one wants to remember that.”

Years later, Harrison was surprised when a doctor found shrapnel in his leg from his military days of planes dropping bombs.

His best and most memorable experience was when he was told he’d be going home. He said the war was dwindling down, and the military casualties were declining.

“The most beautiful place I remember was Paris and the Arc de Triumph and the main drag, the Champs-Elysees,” Harrison said.

He also commented on how with all the destruction around Paris seemed to not be hit as hard and was surprised the Arc de Triumph appeared to be untouched. “Everyone should see the Eiffel Tower in their lifetime,” he added.

After returning home in 1946, Harrison went to work at Morris Joplin Hardware for about four years before going to Wickline Chevrolet as a parts manager.

“He was so mild-mannered that you could’ve put off dynamite under his chair, and it wouldn’t have fazed him,” Keatts said. “He is one of the most special people I’ve ever met. My husband has jokingly said over the years that if I were ever to leave him, it would be for Buford Harrison.”

While working for Wickline Chevrolet, Harrison worked part time as a magistrate. Upon retiring from the car business, he became a full-time magistrate. He went on to become chief magistrate for Franklin and Pittsylvania counties and for the city of Danville, before retiring in 2002.

Judge Bill Alexander said, “I’ve known him almost all my life. As a magistrate, he really did a wonderful job. He was a pretty no-nonsense guy, and you always knew where he stood. I really enjoyed working with him. He was a hard worker and nice to people.”

Harrison received kind words from others he worked with, including Jackie Brubaker, clerk of court for the general district courts for Franklin and Pittsylvania counties. “He was always very knowledgeable and pleasant to be around.”

Remembering back to 1976 and his time as a new deputy, H.L. Nolen of the Franklin County Sheriff’s Office, found Harrison to be fair and stern, yet always pleasant and kind. “Even after he retired, he was always a friend to the sheriff’s office.”

Harrison also made friends at his church, Rocky Mount United Methodist Church. Pastor Will Waller said, “People would just gravitate towards him because of his illustrious career. Buford is such an incredible person. He is still as quick and keen as he’s always been. His stories, wit and humor astound me for a person of his age.”

Another important part of Harrison’s life was the 40-plus years he served as a volunteer firefighter with the Rocky Mount Fire Department, including a stint as fire chief.

Charlie Robertson, who served as a volunteer firefighter for 41 years, said it was an “honor” to have served with Harrison.

“He was always a very dedicated fireman and very interested in contributing to his community.” Robertson said. “He was a good chief — on top of things, well-rounded and had good business sense.”

Harrison wasn’t always working. He was fond of fishing and had success both in fresh water ponds and rivers and in salt water. Other hobbies included hunting, skeet shooting, poker and golf. He was also a founding member of Rocky Mount Moose Lodge 1053.

These days Harrison enjoys talking and sharing stories when he gets a chance; however, most of his friends have passed away. Before COVID-19, he used to get together and share stories with Korean War veteran Cecil Love at Dairy Queen. His best friends now are his neighbors and his best buddies are his cats, Sophie and Elliot, whom he loves dearly.

Harrison said everything has changed so much in his 95 years. He feels the greatest change has been the strides for racial equality. As a youth he saw lots of discrimination, but when he went in the service, he felt that changed things for him.

His daughter expressed the family’s appreciation to the community for the motorcade parade, including to Nolen, Waller and Robertson, in addition to Doris and Bobby Radford with Pizza King Kruisers.

Siak expressed her appreciation for her father. “I feel honored to have a dad who has served in the military and served his community as well as he has. He raised two teenage daughters after my mom passed away and worked two jobs.”

She added, “We don’t often get a chance to thank our parents through the newspaper, but I’d love to say thank you to my dad for your willing sacrifices in your life, your hard work for us and others and for your love.”