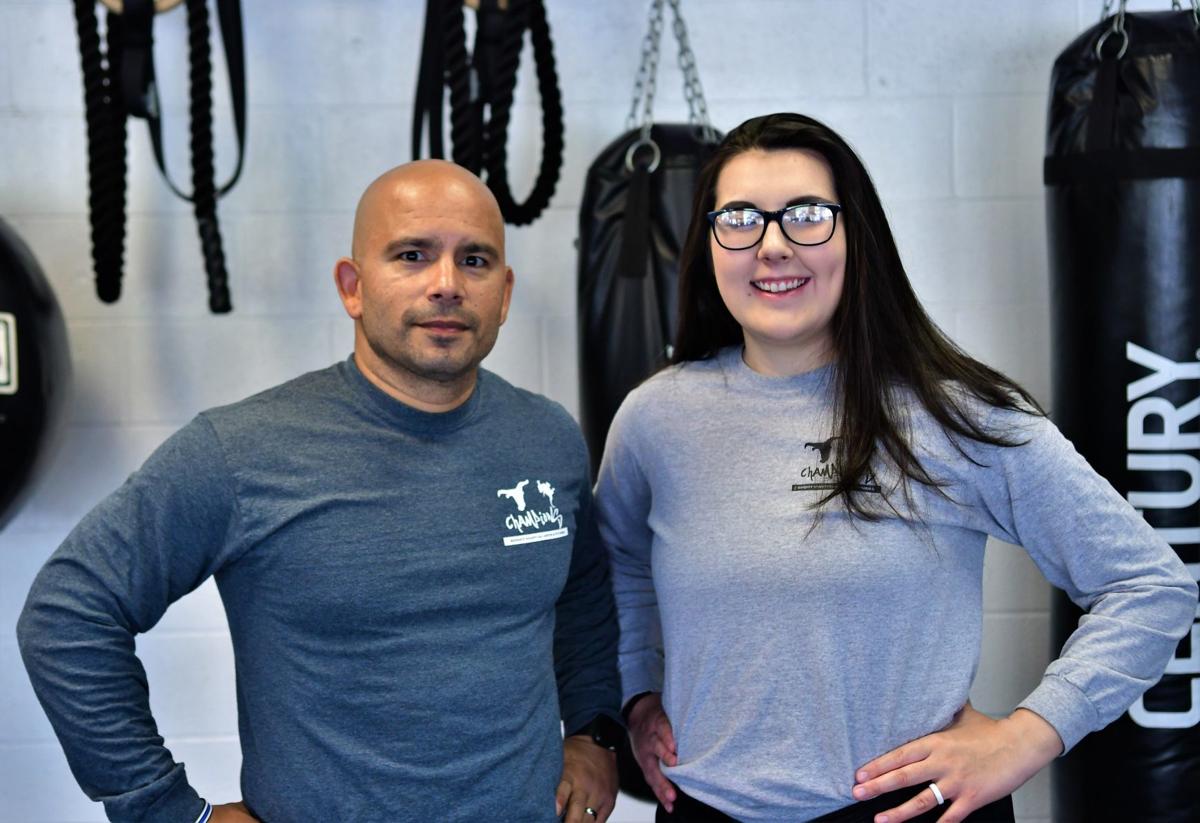 Audrey and Edwin Alejandro own and operate Champions Sport Martial Arts and Fitness in downtown Rocky Mount. The couple has been giving back to the community by offering online Zoom classes for students and helping to promote other local businesses.

Students participate in martial arts classes online during the COVID-19 pandemic with Champions Sport Martial Arts and Fitness. The studio has been closed due to government regulations stemming from the pandemic.

Audrey and Edwin Alejandro own and operate Champions Sport Martial Arts and Fitness in downtown Rocky Mount. The couple has been giving back to the community by offering online Zoom classes for students and helping to promote other local businesses.

Students participate in martial arts classes online during the COVID-19 pandemic with Champions Sport Martial Arts and Fitness. The studio has been closed due to government regulations stemming from the pandemic.

A Franklin County High School graduate, class of 2011, who now owns a local business, is giving back to her community.

Audrey and Edwin Alejandro own and operate Champions Sport Martial Arts and Fitness in downtown Rocky Mount — or Mr. and Mrs. A as their students call them.

Formerly known as Audrey Fitzgerald, her passion for fitness and the martial arts took her to Radford University where she graduated in 2015 with a bachelor’s degree in health and human performance.

During those years, Audrey was continually active in martial arts, competing at some of the highest levels. Her dedication and skill to the sport has earned her titles from both the National Black Belt League, as well as the Sport Karate International League. It also led to her meeting her future husband and partner, Edwin.

Edwin is a multiple time world champion martial artist who has coached athletes of all ages earning more than 40 world and amateur international championships. He has been featured in television shows such as “Sleepy Hollow,” “Revolution,” “Banshee” and “Turn.” You can also catch his performance stuntw ork in the movies “Tammy,” “Crossing Streets” and “The Remaining.”

In addition to the martial arts center, Edwin works as a deputy with the Franklin County Sheriff’s Office.

The couple were married in 2016 — the same year they opened the doors to Champions. By this time they had already generated quite a following through their work with after-school programs and a teaching stint at the Franklin County Family YMCA.

“Before we knew it, before we even advertised, we had 40 new students,” Audrey said.

Since then, the program has grown to about 75 students of all ages. Champions offers classes starting with their “Tiny Champions,” serving ages 3 to 6, up to the “Mixed Martial Arts,” classes for ages 14 to adult. The center also offers both a summer and winter camp each year to help keep young people active when they are out of school.

There is, however, more activity there than just the six weekly scheduled classes.

“We are involved in dozens, sometimes a hundred or more, activities with our kids in any given week,” Audrey said.

Audrey and Edwin stress what they call a “family approach” to their business. Beyond the regular classes, they can be found creating extracurricular activities designed to instill a unity of kindred spirit with their students.

This strong bond was not going to be disrupted or suspended by any pandemic, either. Audrey and Edwin were determined to keep their students together and active. Immediately upon closing their doors in response to the state mandates, they started running online Zoom classes for the kids.

Audrey explained the goals for the online program were to keep the students socially engaged, physically active, on-track with their martial arts curriculum and to lighten the loads for parents, even if just for an hour a day.

Audrey summarized the goal of Champions is more than just learning how to punch and kick.

“It is a mindset and a way of living,” Audrey said. “Becoming a black belt is about a pursuit of excellence in all that we do, and a huge part of what encompasses the black belt mindset is constantly looking for ways one can help someone else. As a school, we look for opportunities to help our students and FC community in any capacity we can.”

The kindred spirit of Champions goes beyond just their students and to the community that it serves. The Alejandros had just purchased a new van to use for student pickups, which now during the closure is not in use. So they decided to get it up and running in a joint effort with local restaurants and churches to provide lunches to community families in need.

Additionally, the couple brainstormed a new online campaign called, “Adopt a Local Business.” The focus is to help out small local Franklin County businesses and self-employed workers during this difficult economic time.

“We will be sharing information about two small local businesses each week on our Champions Fan Page (on Facebook), as well as our personal accounts twice a day throughout each week,” Audrey said. “Likes and shares go such a long way for businesses and this is something simple and easy to do.”

During this campaign, Champions Sport Martial Arts will also be making a donation or purchasing a good, service or gift certificate from these featured businesses. They challenge all their friends to do likewise.

“Together, our Franklin County community can get through this difficult time and help each other to thrive once this is all over,” Audrey said.