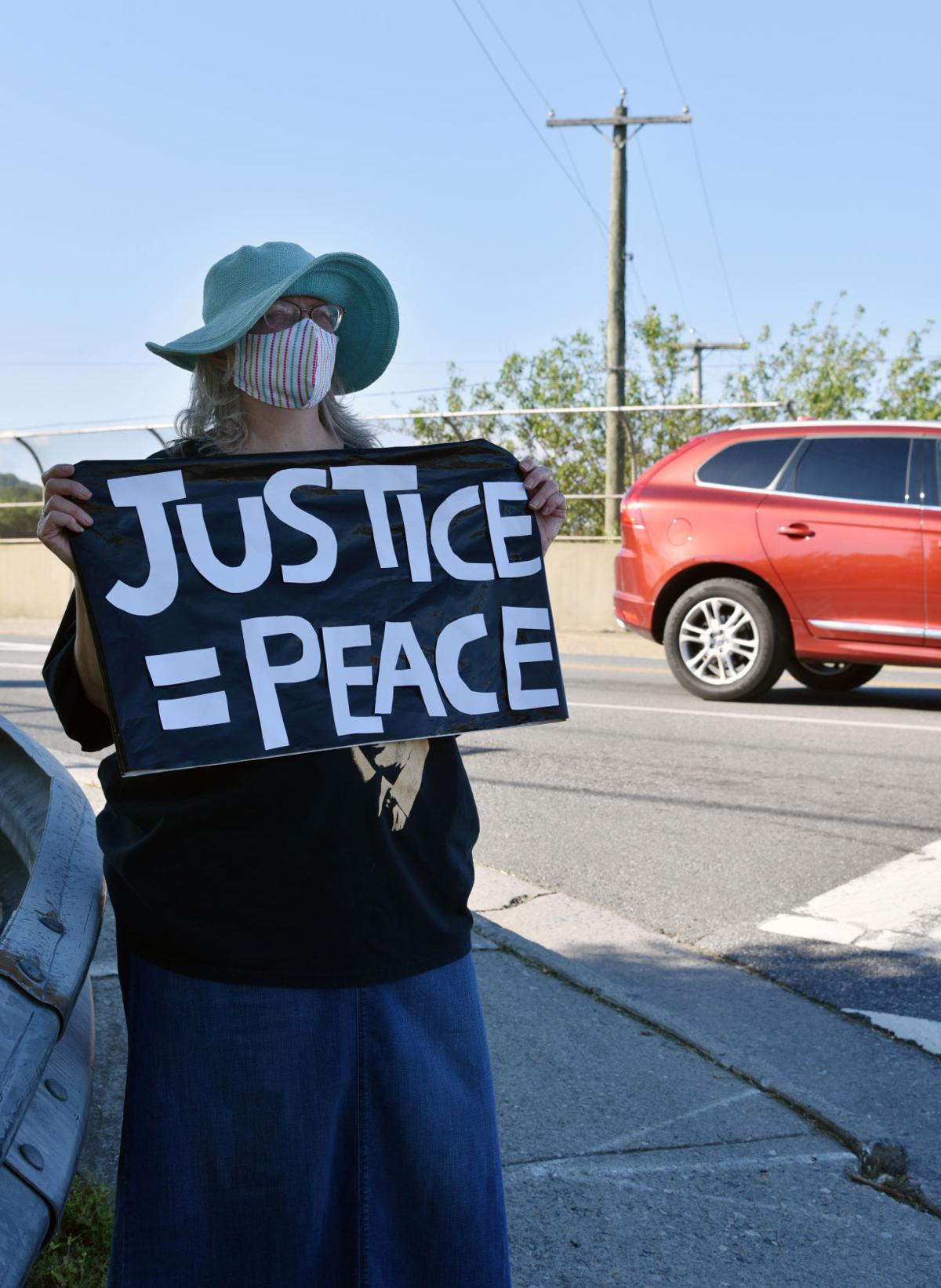 Susan Mead stood at the corner of North Main and Franklin streets to spread a message of awareness of oppression and support for the black community. 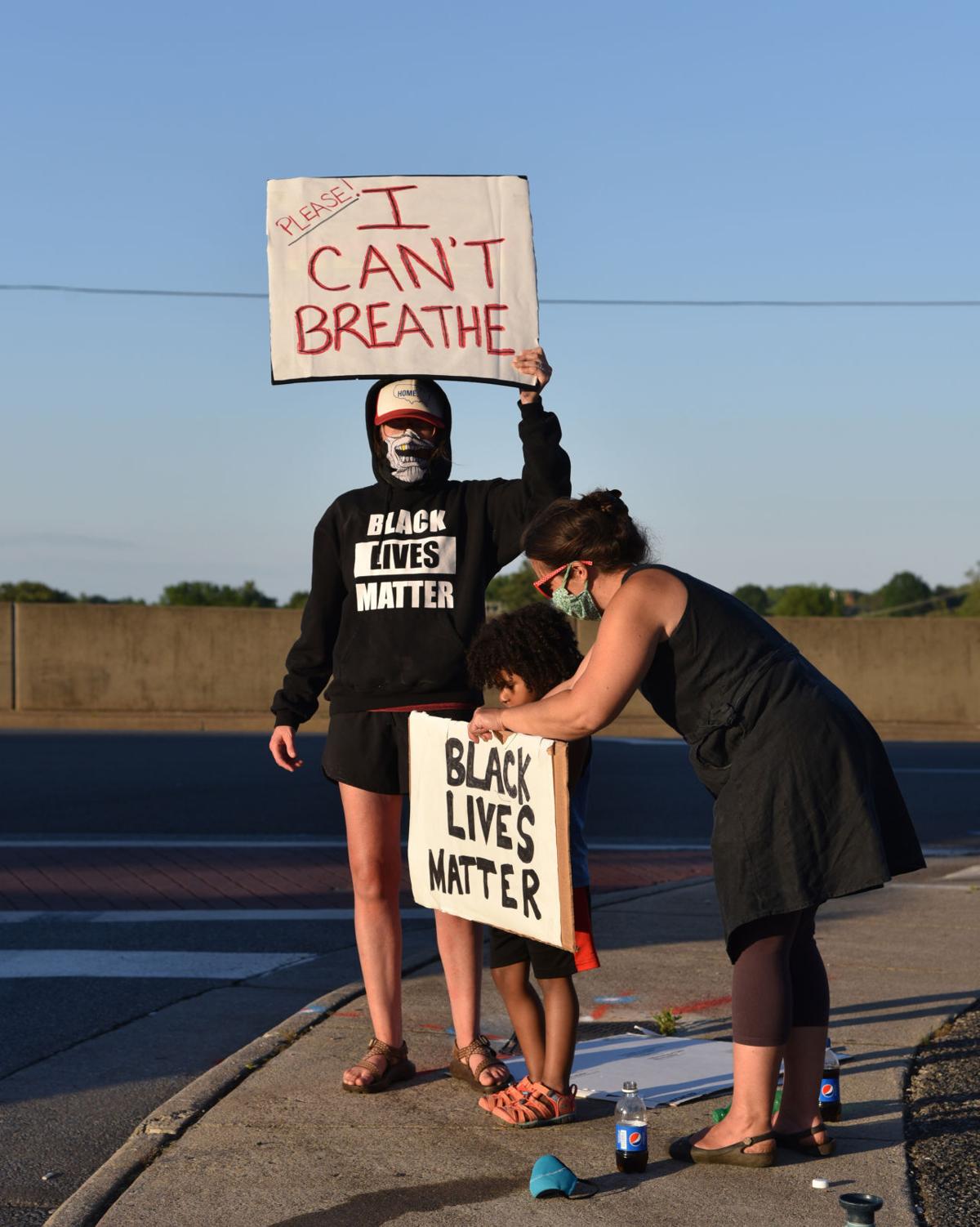 Two protesters from Ferrum stood on the corner of North Main and Franklin streets on May 30.

Susan Mead stood at the corner of North Main and Franklin streets to spread a message of awareness of oppression and support for the black community.

Two protesters from Ferrum stood on the corner of North Main and Franklin streets on May 30.

While protests erupted around the nation, Franklin County was no exception.

The protests followed the death of an unarmed black man named George Floyd, as police in Minneapolis knelt on his neck during a response to a call from a deli accusing him of paying with a counterfeit $20 bill. According to a New York Times article, Floyd was pinned by police for eight minutes and 46 seconds despite Floyd telling responders he could not breathe.

Throughout the weekend, Rocky Mount saw demonstrations, some organized, some not.

On Saturday night, Susan Mead said she wasn’t comfortable going to Roanoke to join protest efforts there, because of social distancing and concerns stemming from the COVID-19 pandemic. A Rocky Mount resident, she decided to focus her efforts closer to home.

“It’s not about me,” Mead said. “I am just one citizen who is tired of people being oppressed.”

As she stood holding a sign that said “Justice=Peace,” she explained, “There is the saying ‘No justice no peace,’ justice will bring us peace. If we had learned that 60 years ago we wouldn’t be in this current situation. People have to stand up. They have to counter the narrative. They have to counter the racism … You just stand up where you can.”

Donning a face mask, due to the pandemic, she stood alone for a while on the corner of North Main and Franklin streets. Mead said she had not had any negative feedback or hecklers. Some blew horns as they passed or waved.

She was joined by two friends later that evening from Ferrum. They declined comment other than to say they were just out to support the message as they held signs that said “Black Lives Matter” and “I can’t breathe.”

On Sunday afternoon, approximately 100 people came and went from a demonstration at the Rocky Mount Farmers’ Market. Jayana Fuller, a Ferrum resident, organized the effort with Chloe Newbill and Bryce Hall calling for nonviolent, civil demonstration. The protest lasted approximately two hours, and she said there was no police presence other than one Rocky Mount Police officer who stopped by to offered bottled water. She said the organizers already had a cooler with water and masks for those who joined them at the downtown market.

Fuller said she was pleased with how the demonstration went.

“We wanted to show our awareness of the people who lost their lives due to police brutality,” Fuller said. “I feel like it went really well. We got a lot of positive feedback.

“Being a black woman, I was proud to see white people there. Some came up to me saying they hope to be part of the change … Franklin County is a good community with good people, and we may not experience as many racist issues around here but we are lucky we don’t have to.”

Newbill, who was one of the co-facilitators of the event, said she was “very surprised” by the large turnout and that it “made my heart extremely warm.”

Like Fuller she said she doesn’t feel Franklin County has as many race issues as other parts of the state and nation, but “that doesn’t mean we can’t acknowledge things are wrong in other places.”

Bridgette Craighead is hoping to have a peaceful demonstration Wednesday at the Franklin County Courthouse by the statue. The event is planned to start at 11 a.m., and Craighead said she understood people have to work, but is hoping to have many people throughout the entire day.

“I’m not going to lie to you, people are angry, but I’ve told them ‘there’s no need to shout, let the world see your sign,’ ” she said adding she wants the event to be about showing love. “I really want to shake up Franklin County—shake the hate out of Franklin County. We have to grow as a people and hate should not be allowed to stay.”

Rocky Mount Police Department donated cases of bottled water for the event. Craighead said she hopes the police officers will join them at the demonstration and plans for it to be safe for them to do so.

The Franklin County Sheriff’s Office said the protests thus far have been peaceful and have not needed a deputy presence, beyond a supportive drive-by.

A protest is also planned for June 6 from 1 to 3 p.m. on the sidewalk at the corner of Pell Avenue and North Main Street in Rocky Mount. Alexis Mills, who is organizing the protest said her message is for justice and that black lives matter.

“What I want to come of this is for George Floyd to get the justice he needs and his family also,” Mills said. “Justice for me — I just wish the courts would see officers as people instead of officers. They are treated like they are different beings than regular citizens and get charged differently. I hope it is not going to be like that much longer.”

She said she is also asking participants to refrain from any form of violence and to wear a mask to protect others, as well as practice social distancing of 6 feet due to the COVID-19 pandemic.

“The coronavirus is still here, and we don’t want anyone getting sick because they spoke out,” Mills said.