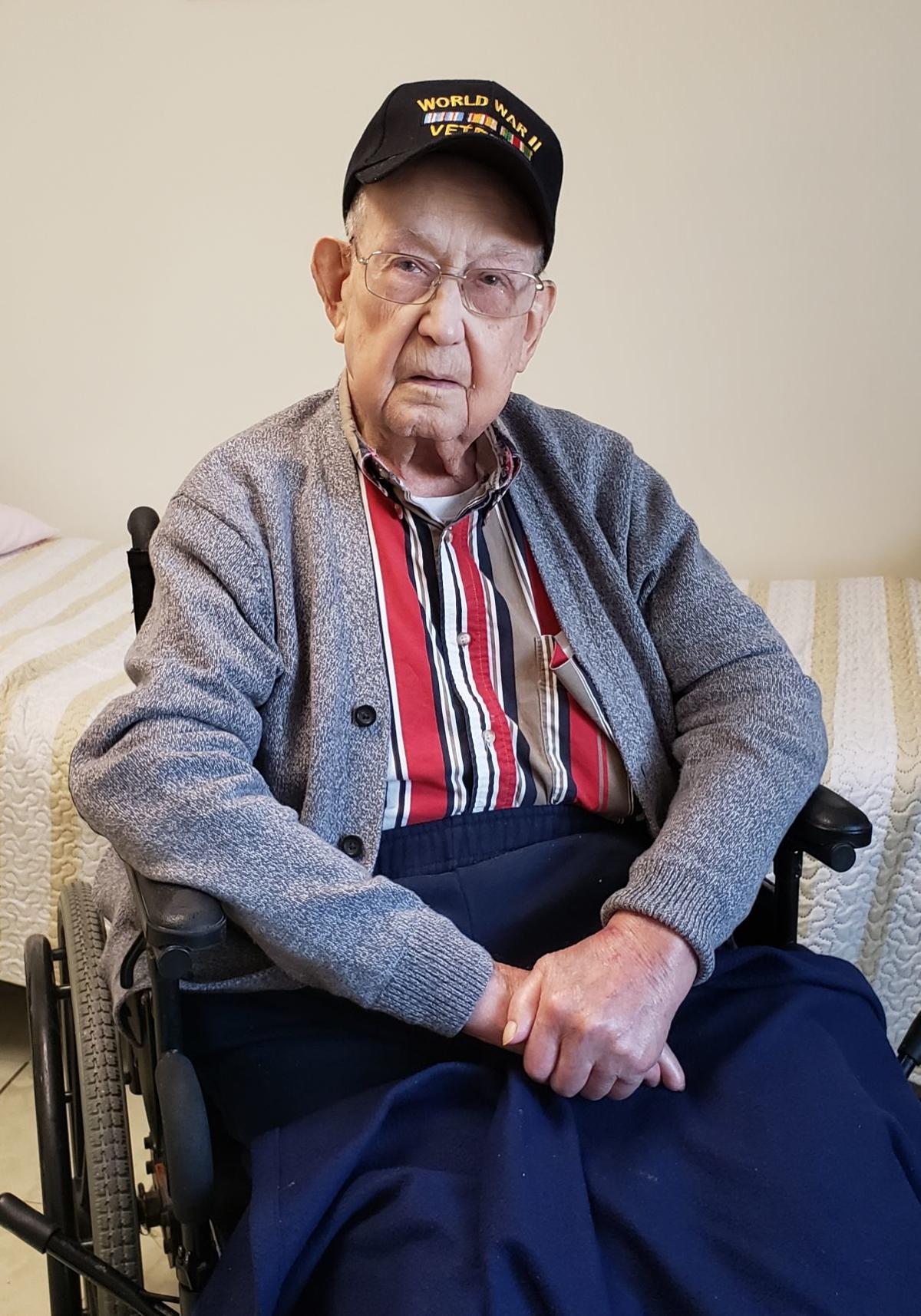 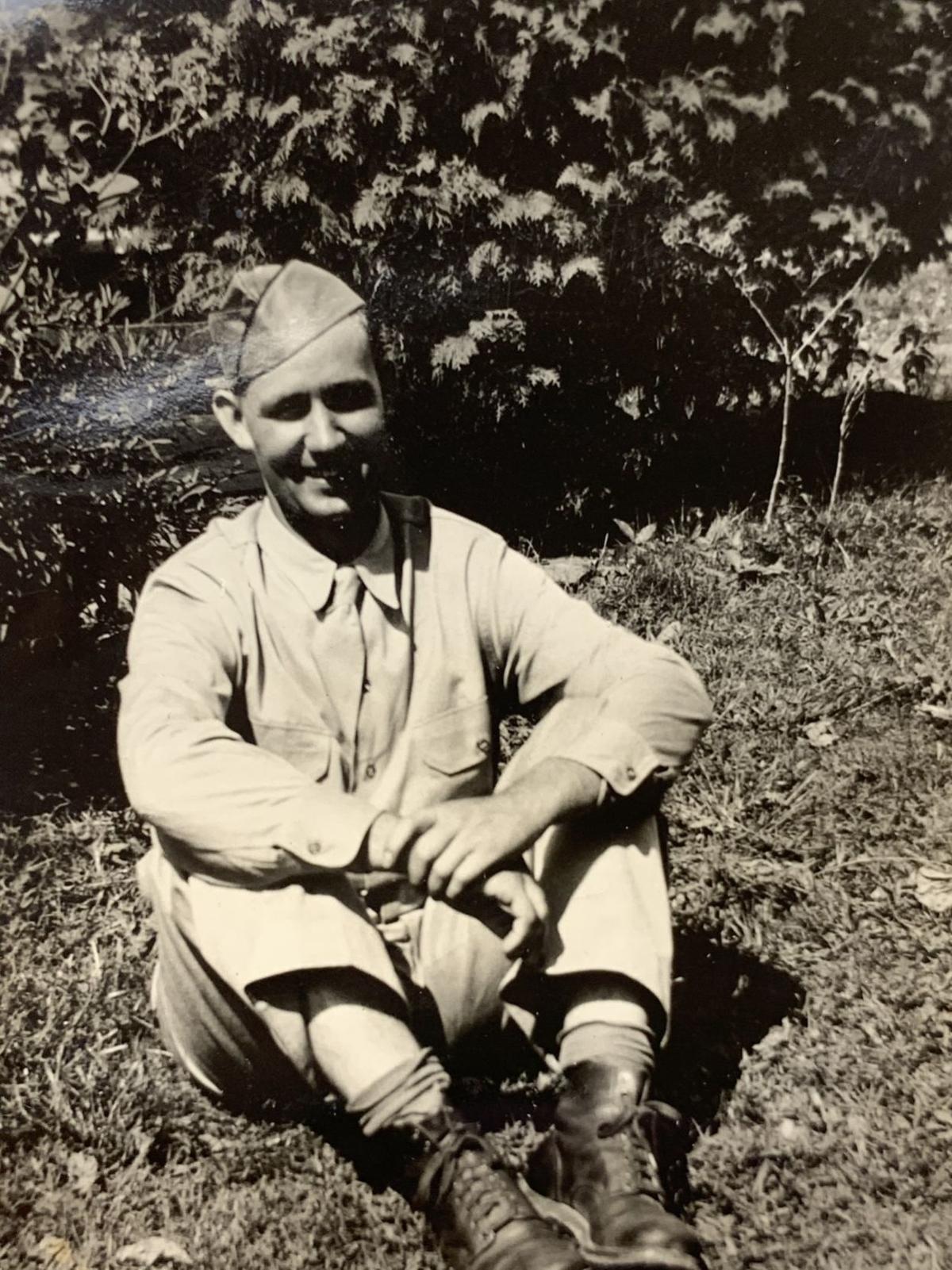 This photo of William Guinn Young was taken during training in Fort Eustis, Virginia in September 1942.

This photo of William Guinn Young was taken during training in Fort Eustis, Virginia in September 1942.

“I could smell the war, and I could taste it,” said William Guinn Young. “I had no interest in going.”

That is what Guinn told his family members when they tried to get him to visit the National D-Day Memorial in Bedford.

At age 100, Young remembers vividly his time served in World War II and the scenes he witnessed as allied troops stormed the beaches of Normandy, France on Tuesday, June 6, 1944.

Young was born Jan. 24, 1919 in the Henry section of Franklin County where he was raised along with nine siblings — all deceased now.

Soon after, he was drafted into the Army.

Young said the Army turned him down at first because of personal health reasons.

“They found out there were so many others in my shape, they would have nobody to fight,” he said. “So, they put me in the hospital, fixed me up, and I was in.”

Young entered the service in July 1942 — a part of the 348 Ordinance Company. He was first shipped to Camp Lee and then to Fort Eustis near Norfolk for basic training.

“Fort Eustis was just plain out hiking,” he said. “It was just torture.”

After basic training, Young spent months on an Army base in Sag Harbor in New York. Eventually, he found himself boarding a ship to England where he stayed for close to a year.

“The fight was on,” he said. “I was in England the day the fight started.”

From England, Young and his comrades crossed the channel to France during the night.

“They claimed there was an island we were going to land on from England,” he said. “The island turned out to be not much bigger than a bed.”

Young said once off the boat, the crew landed in 7 feet of water.

“Most people think a motor won’t run under water, but it will run under water for 90 seconds,” he said. “We had to keep that motor dry every 90 seconds. I just knew I had to make it up the hill to where all the boys were getting killed at. We went up the hill in a truck with a Caterpillar tractor behind it. At that time, our job was to make it to the top alive. There was popping and cracking all around. Blood was running down the side of the hill. There were dead Germans everywhere and dead Americans, too. Almighty God protected me. I could have gotten shot, but I didn’t.”

Once Young made it safely to the top of the hill, he said, “someone met us and told us to follow him. He said he had a place set up for us in an apple orchard.”

Young’s job at that time was to dispense auto and gun parts to the soldiers on the front lines.

“I dished out auto parts and gun parts like rifles and ammunition,” he said. “We kept the parts on a trailer. I’d have to know which bearings go where and on which trucks. I made $40 a month when I was inducted. And I was among the first group to get that $40. Before that, men were paid $20 a month.”

Young was discharged from the Army on Dec. 18, 1945 when it was discovered his blood was low. “They were going to keep me until they could fill my blood up enough for me to continue my service, but I was sent home a short time later, around Christmas.”

Even though Young was leaving the war, he still had to fight to get home.

“I was sent back to New York, where they gave me $300 and told me to figure it out from there,” he said.

Young made his way to Washington, D.C., where he caught a train to Danville. From there, he had no choice but to start walking toward home.

“I called my wife and then my brother,” he said. “I told my wife I had made it to a little restaurant we used to eat at before the war.”

Young caught rides to Martinsville where his brother lived and his wife was boarding.

“It was like a second marriage when I saw my wife,” he said. “She worked at Pannill Knitting in Martinsville to support herself while I was away, and put every dime of the money I sent her in the bank. If she hadn’t done that, I don’t know what we would have done. We used that money to buy our first house — a small house in Martinsville.”

Young said all goods and supplies during that time went to the war effort.

“Everything back then had to be rationed,” he said. “It’s like the entire world shut down. You couldn’t even buy a pair of shoes. So, we were happy we were finally able to buy the house, but we couldn’t find anything to put in it. Not even a frying pan for my wife to fix breakfast. One day, I found a piece of tin that had blown off someone’s roof and I cleaned it enough to use as a bread pan.”

Before the war, Young worked for Hooker Furniture in Martinsville.

“Soon after I returned home from the war, I received word that my old job was still open,” Young said. “So, I went back to work for the same place I worked before the war.”

Young worked for Hooker Furniture 43 years. He and his wife were married for 77 years before she died earlier this year.

World War II began Sept. 1, 1939 and each year on Dec. 7, the United States stops to commemorate the victims of the attack on Pearl Harbor.

The Normandy landings were the largest seaborne invasion in history with nearly 160,000 troops crossing the English Channel on D-Day. There were at least 10,000 Allied casualties on the first day.

“The whole thing is like a dream to me,” Young said. “It happened so long ago. I tell people all the time. They took everything I had down to my last pair of shoes. It’s one of the things that’s taken so much out of my life. The average person wouldn’t understand.”