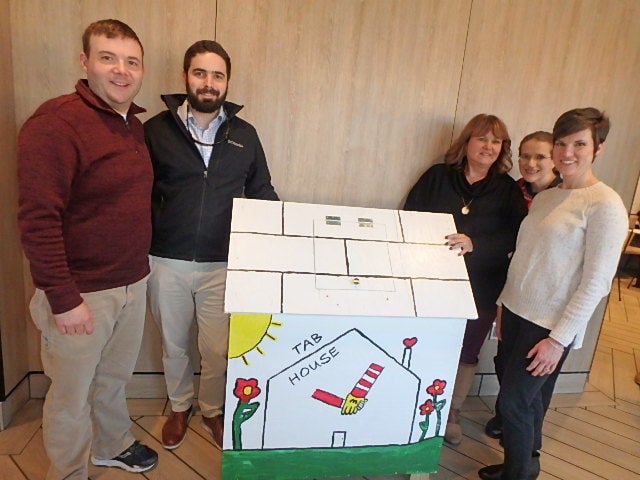 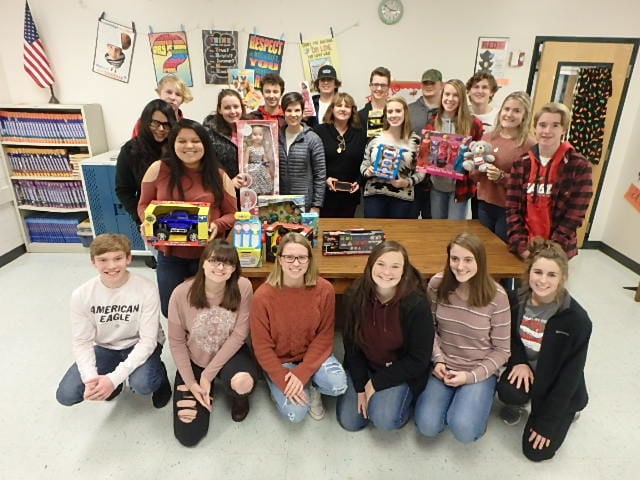 FCHS students from Laura Bird’s Spanish 3 class gather with some of the toys they helped collect throughout the school to be donated to the Ronald McDonald House in Roanoke. Joining the students are Amanda Rucker, owner/operator of Rocky Mount McDonald’s and Stephanie Carroll, director of Special Events and Community Development for the Ronald McDonald House in Roanoke.

FCHS students from Laura Bird’s Spanish 3 class gather with some of the toys they helped collect throughout the school to be donated to the Ronald McDonald House in Roanoke. Joining the students are Amanda Rucker, owner/operator of Rocky Mount McDonald’s and Stephanie Carroll, director of Special Events and Community Development for the Ronald McDonald House in Roanoke.

Webster’s Dictionary defines “benefactor” as a friendly and generous helper. Franklin County High School students have been ongoing benefactors for the Ronald McDonald House in Roanoke through their efforts in general maintenance and Spanish 3 classes this past semester.

Thirteen students in C.D. White’s general maintenance class built four “tab” houses to benefit RMH. One of the small houses was placed at Rocky Mount McDonald’s and another at McDonald’s in Gretna. The other two houses await placement.

A “tab” house is a receptacle for aluminum pull tabs that come from soda and soup cans. The money from the recycled tabs is donated to RMH to help with operational costs.

The general maintenance class at FCHS equips students with general custodial and measuring skills, as well as basic electrical, plumbing and carpentry skills.

Having seen the workmanship of last year’s class in making more than 100 wooden toys for RMH, Amanda Rucker, owner/operator of the Rocky Mount McDonald’s, asked White if this year’s class could make the four houses.

The project is “really neat because it’s getting harder and harder for young people to visualize the finished product from looking at raw materials,” White said. “They’ll look at a sheet of plywood, stare at it and say, ‘We’re going to make a house out of this?’ ”

White said he wants his students to have a sense of accomplishment and hopes they get an understanding of doing something good for others without expecting anything in return. The houses provide a tangible sense of achievement, White said, and “not just another highest score on a video game.”

Student Nick Heims is proof of what was learned from the project. “We put a lot of hard work into it and learned about building and using architectural shingles.”

Robbie Dooley, FCHS West Campus administrator and supervisor of Career and Technical Education, said he was pleased the houses were created for such a good cause.

“I think it’s amazing we can work with the community to set these houses up in different places,” Dooley said. “Students can look at the houses and say, ‘I built that.’ “

Meanwhile, across campus, Laura Bird’s Spanish 3 class collected toys for RMH. For a study unit on social action projects, Bird said the students came up with the idea of a school-wide toy drive called “Toys for Joy.”

The class divided into two teams, one for the logistics of placing and retrieving toy collection boxes for every first period class on campus and another for marketing, which included school-wide coverage during announcement periods.

Student Joleigh Helton was the project manager for “Toys for Joy.” She said it felt good to help others. “I can do a lot of things that are bigger than myself that can make a difference,” Helton said when asked what she learned from completing the project.

Health science teacher Kerri Garman’s first period class collected the most toys and was rewarded with a breakfast from McDonald’s.

Rucker said she appreciates FCHS’s contributions to RMH. She has served on RMH’s board of trustees as a liaison between the charity and about 60 owners/operators for more than six years.

Stephanie Carroll, director of Special Events and Community Development for RMH, visited FCHS recently to receive the houses and toys. She expressed her appreciation to FCHS and to Rocky Mount McDonald’s.

“She goes above and beyond to make events very successful when it comes to the RMH,” Carroll said of Rucker’s efforts.

Ronald McDonald houses accommodate families who live outside an area of the hospital where their children are receiving critical care. Roanoke’s RMH opened in 1984 and serves an average of 700 families per year.

A few cents added to a customer’s order with the Round-Up for RMH Charities program or donated change in a collection box can add up. In 2018, McDonald’s customers donated more than $50 million with their change.

Lisa Sayer, assistant manager at the Rocky Mount McDonald’s, knows firsthand about RMH. In the early 1990s, she and her family relied on the charity while their child was being cared for.

“The RMH is one of my favorite places,” Sayer said. “The outpouring of love was amazing. It was such an incredible thing.”