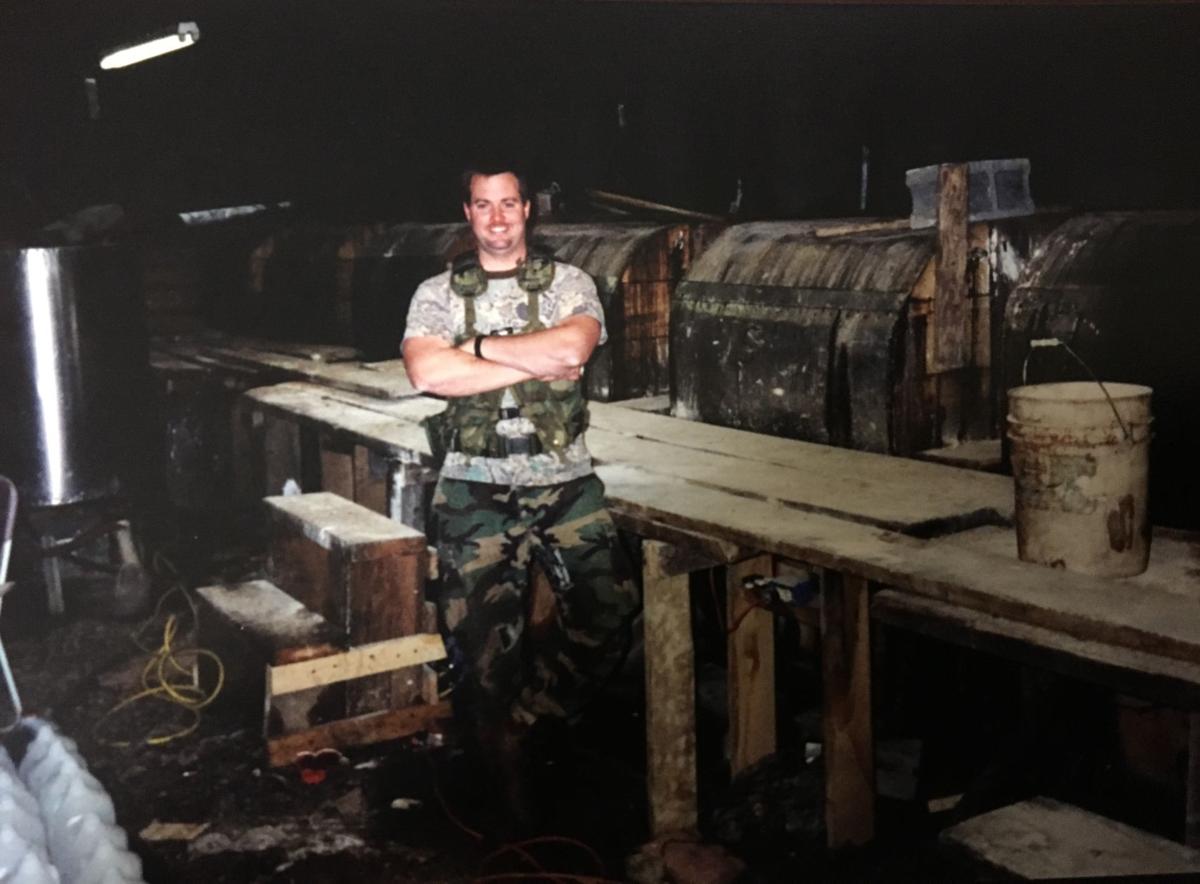 Special Agent Mark Scott stands in front of multiple stills that were raided during an undercover investigation in the 1990s. 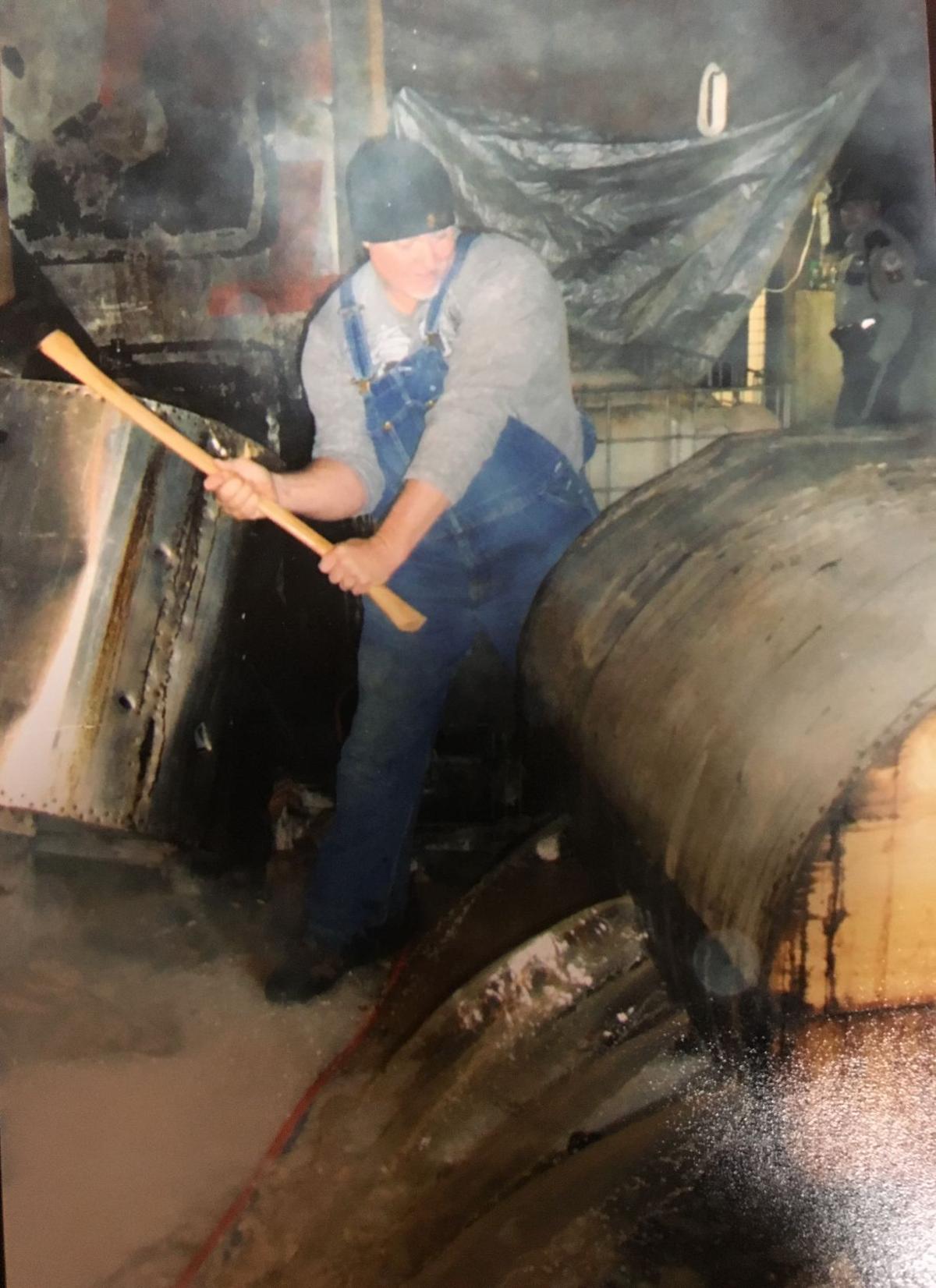 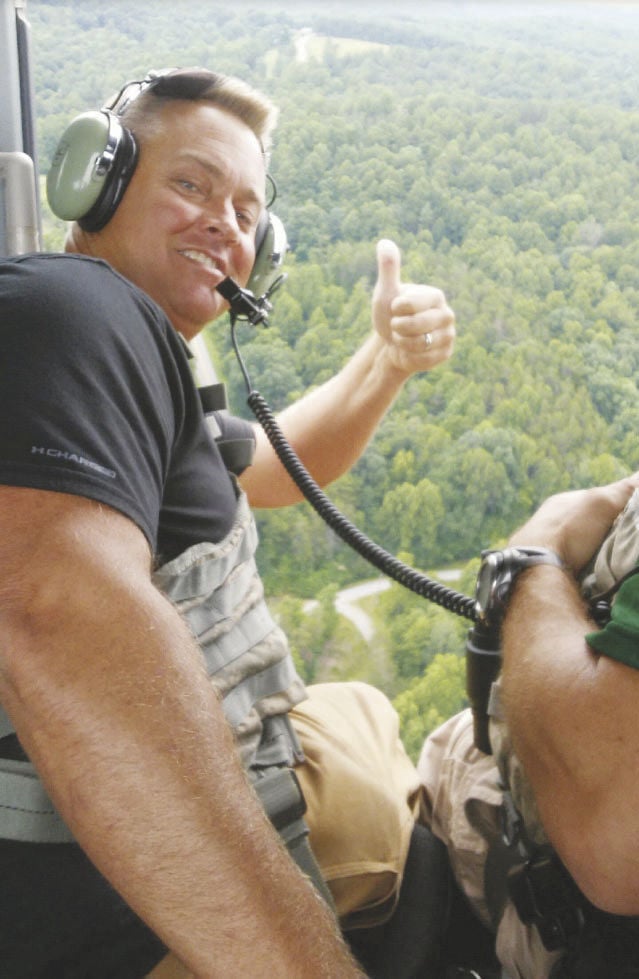 Mark Scott hangs out of a helicopter during an operation.

Mark Scott was a special agent for 21 years.

He’s done hundreds of untaxed liquor and narcotics investigations. He spent years undercover in drug and gambling operations; and he was one of the five special agents to participate in Operation Lightning Strike, one of the largest operations to take down the making and selling of untaxed liquor in and around Franklin County.

After 21 years of undercover stake-outs and operations, 51-year-old Mark Scott retired from the Virginia Department of Alcoholic Beverage Control on April 1. He was the last agent from ‘Lightning Strike’ to retire.

"What attracted me to the ABC was the independence, not having to wear a uniform and being able to conduct complex investigations," Scott said. "The ABC in nature focuses on alcohol, but in Virginia we do a lot of narcotic investigations, gambling, prostitution, money laundering and tax evasion.

"From day one I was flying in the helicopters looking for marijuana, liquor and working in the woods," he added. "It’s been nothing but fun."

Scott is originally from Lynchburg but moved to Rocky Mount when he took the position with ABC in 1997. After high school, he joined the United States Marine Corps and served four years of active duty. During his service, he did a two-year tour in Okinawa conducting military intelligence.

After his time in the marines he obtained a bachelor’s degree in criminal justice from Liberty University and then went to work as a deputy sheriff at the Bedford County Sheriff’s Department.

"I had heard about all of the moonshine in Franklin County,"

Scott said. "And I heard how ABC agents would wear camouflage and fly helicopters and run around the woods and I’m a former marine so I thought, ‘maybe I’d like to do that.’"

Scott applied for positions at ABC and Virginia State Police and received job offers for both. He chose ABC.

According to ABC spokeswoman Valerie Hubbard, special agent Scott was employed with ABC from Jan. 16, 1997 to April 1, 2018. As of 2015-2016 his base salary was $54,602. Hubbard confirmed that he was the last agent from Operation Lightning Strike to retire.

"One of the biggest cases ever done was in the making when I started, Operation Lightning Strike," he said. "I was assigned to the illegal liquor task force that was based out of Franklin County and was able to help participate in that entire operation. I learned a lot from that group."

He said he was immediately assigned to the Virginia State Police Governor’s Initiative Against Narcotics Trafficking task force. While working on Lightning Strike, he was also assigned to other tasks.

The Operation Lightning Strike investigation ran from 1997 to 1999 in Franklin, Pittsylvania and Craig counties. In all, 16 active stills were raided and 10,600 gallons of mash and more than 800 gallons of untaxed liquor were seized and destroyed. Twenty-nine people were convicted from the operation.

"It was over a million dollars if you add all of that up," he said.

It was a long and detailed investigation.

"We started flying using the military and state police helicopters – we call them air-ground operations," he said. "We would collect information all year long, sites where they might be doing something. In order to verify it, you’d have to walk it.

"I’m talking about walking up mountains where it could take a whole day and night to drop off, go in, locate it and determine if it is active," he said. "We would fly to help verify and eliminate information."

During air-ground operations, the agents in the air would get the coordinates of the location they believed to see something going on, according to Scott. They would then send in a ground team and conduct a physical stake-out onsite.

Scott assisted with the physical surveillance. He said he spent hours laying in the woods, in full camouflage, "in all kinds of weather" tracking people on site and in their cars.

"Just getting the still wasn’t enough," he said. "We’d have to have evidence that the violator was manufacturing the stuff. You’d pretty much have to catch them with their hand in the cookie jar."

The agents had the nickname "revenuer" during the operation, which Scott said is an "old school term."

"That’s what the moonshiners called us," he said. "They would make the liquor and we would come and take their stuff, and because they weren’t paying taxes on it I guess they generated that term ‘revenuer.’"

But even though he was investigating moonshiners, he got a long with them.

"I got along well with most of the moonshiners because we treated them very well," he said. "We had a job to do, most of them respected us, and at the same time we tried to respect them.

"But at the same time we had to enforce the laws that are bound by the commonwealth," he added.

When a moonshiner was wanted by law enforcement, Scott said he would call the moonshiner and give them an opportunity to turn themselves in rather than raiding their place and arresting them on site.

"Not all of them, but there was a common respect in my opinion between both ends," he said. "I realized the heritage and the history is hard to replace. A lot of these bootleggers are third and fourth generations, their families did it to actually survive. It was a craft handed down through generations and generations."

"We just had that kind of respect for them," he added. "Most of them were hardworking men, farmers, they treated people in the community fairly. It was more of a cat and mouse game – ‘we gotcha,’ not a ‘let’s go arrest them and lock them up.’"

As an undercover agent, Scott described the work as fun and rewarding, but that doesn’t come without challenging situations.

In 1999 he was working a deep undercover investigation on a narcotics case in Patrick County. He and his informant were buying drugs from a crack dealer multiple times when on one occasion the dealer pulled a gun on Scott while he was sitting in his car.

"He placed the gun right here at my head," he said, pointing at his temple.

"I’ve got a gun and I’m undercover and it’s sitting in the center console but I was too scared to reach for it," he said. "I had an informant with me that was actually in another vehicle making the buy. I was just taking the informant there to make the buy. I was able to talk my way out of it, but we have it on video, and we later used that as officer survival training about how I deescalated the situation."

After that, Scott organized an undercover and basic narcotics training course for new agents, using his own experience as a lesson to those taking the course.

His last big undercover case was a chicken fighting investigation that branched out to multiple states.

"Often in my career I was deputized with the U.S. Marshals to have jurisdiction out of state," he said. "In other words we started going undercover in Wise County, Virginia, and then we started branching into other states. I had the authority to do that."

With the animal fighting investigation, Scott found himself in Kentucky on a mountain top up a one-lane road where there was a huge building and pit. He said people came from up to 30 different states with suitcases full of money to gamble on the fighting, and to sell drugs.

In the middle of that investigation, Scott won that National Liquor Law Enforcement Agent of the Year Award in 2013.

Over his 23 year career in law enforcement, Scott said he has worked with 15 sheriffs and 10 police chiefs on drug and alcohol investigations.

Henry County Sheriff Lane Perry said he’s known Scott for about 20 years. He’s worked with him as an investigator and later as county sheriff.

He described Scott as having a great personality, being hardworking and dedicated to the mission.

"He did his job with integrity," he said. "Mark’s job in alcohol enforcement was to make sure people were safe. He did it with a good personality, and he got out and made sure people were following the rules."

"I consider him a friend," he added."I enjoy knowing him and wish him much success in his retirement."

Although Scott is retiring from the ABC, he said he’s leaving so he can help his wife while she’s in law school. He’ll still have a lot of jobs.

Scott said he recently accepted a position at the Carilion Police Department. He’s taking over his father’s beef cattle farm in Bedford County. He’s considering doing consulting work, and he recently got his private investigator’s license.

And on top of that, he wants to write a book.

"I have so many good stories," he said. "That’s why I want to write this book, because it’s history. You could go to all of the states and police departments you want, but very few people have worked and understand the process of organized crime."

He has a photo album full of pictures from his undercover work that he wants to use in the book.

"Each still, there was something about it," he said. "It was either rainy, snowy, muddy, they got away, we caught them here, I think I would be a very good read."

He wants to include his wife’s family, too. After all, he married a moonshiner’s daughter. Scott said he wants to tell the history of his father-in-law’s career in moonshining.

"We have a good relationship," he said. "It’s awkward at times because I’ve arrested friends of his, and what not, but we keep it professional. I never discuss business with