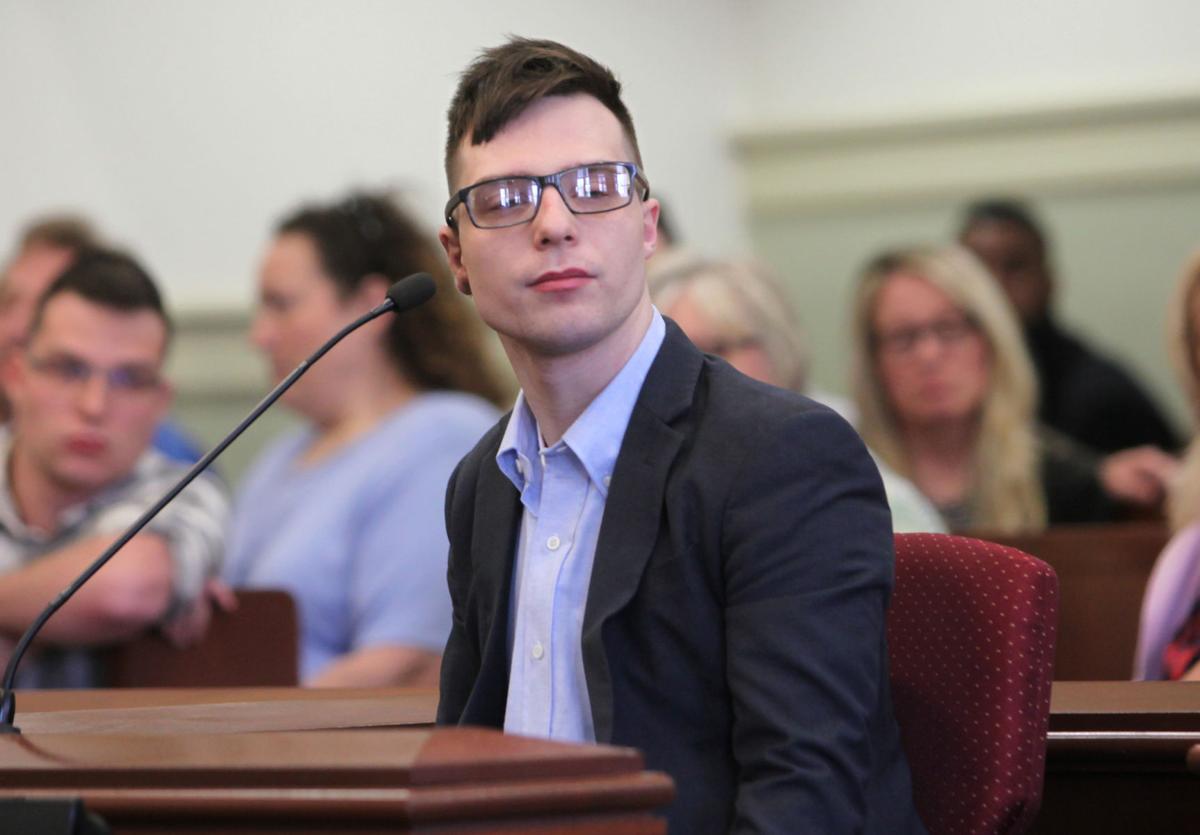 John Isaiah Hodges, 20, testifies in his defense Wednesday in Franklin County Circuit Court. Hodges was convicted Thursday of four felonies related to the 2017 slaying and robbery of 18-year-old Allyn Riddle of Rocky Mount. 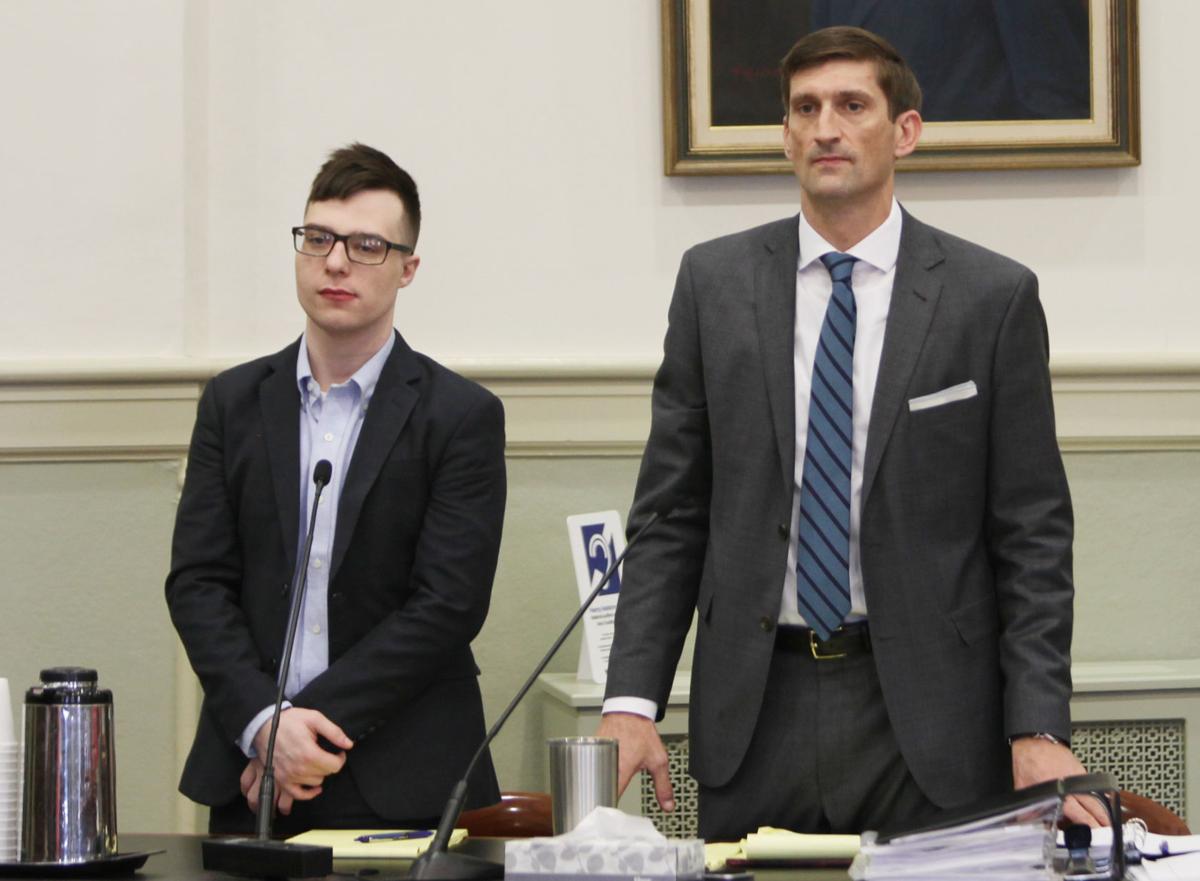 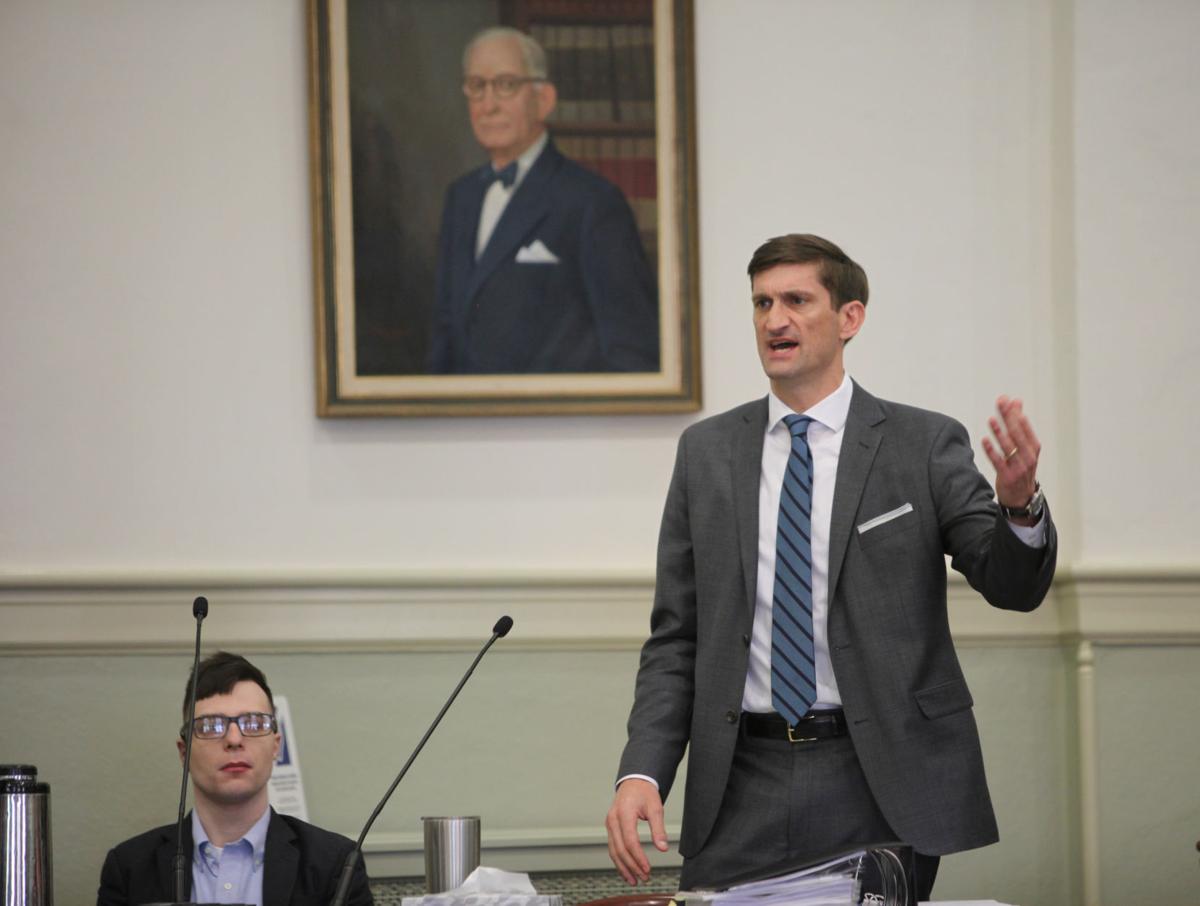 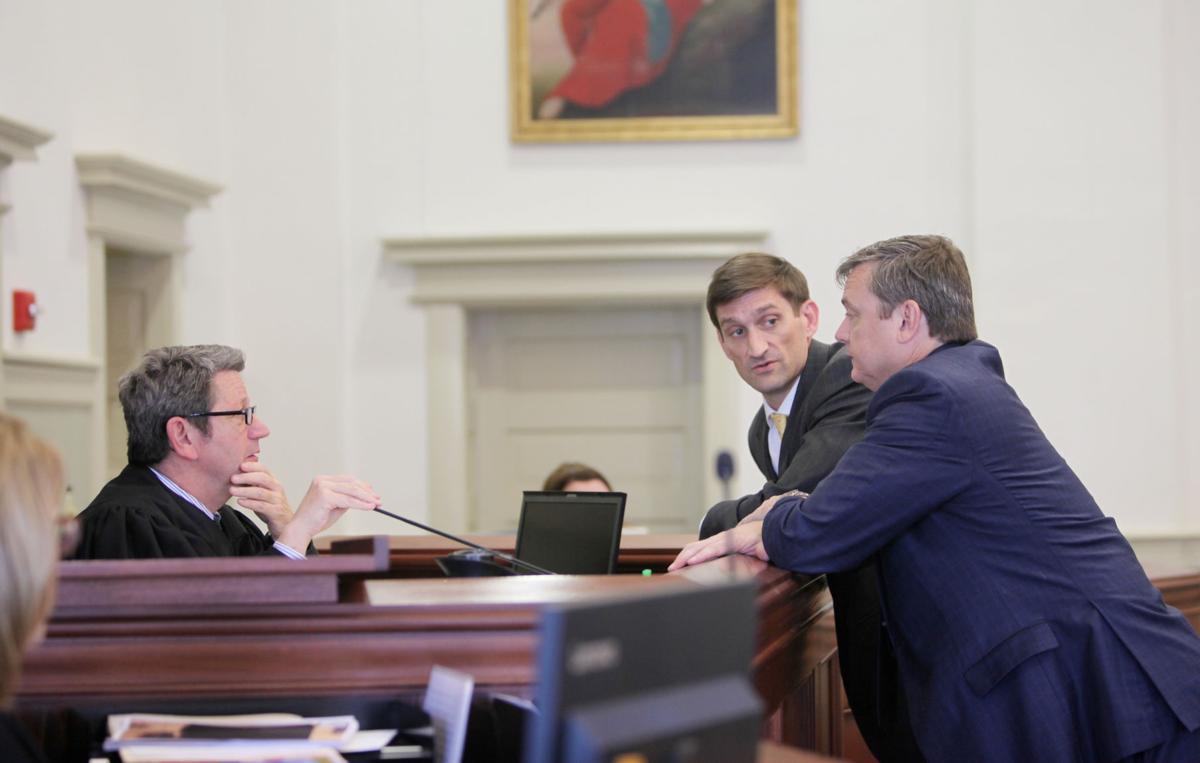 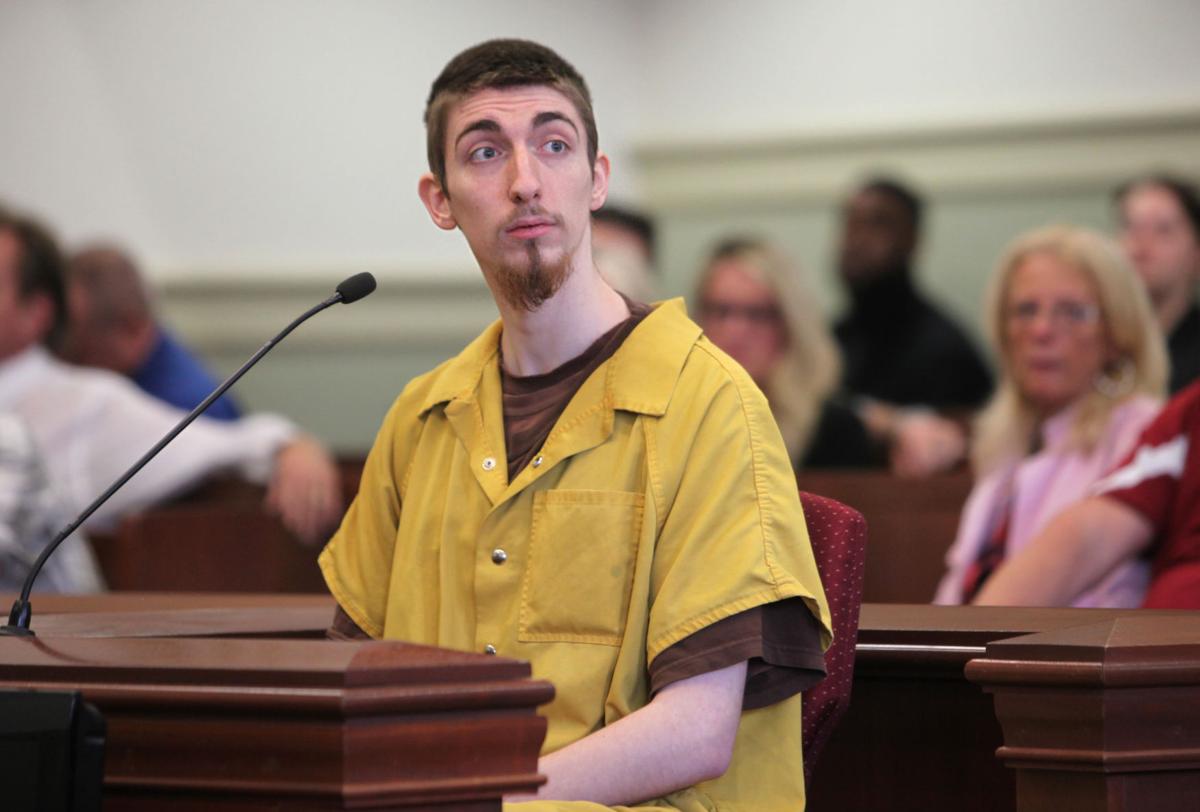 Aaron Seth Dean, 21, is currently serving three life sentences plus 48 years for charges that include the first-degree murder in 2017 of his friend, Allyn Riddle. Dean’s friend, John Isaiah Hodges, was on trial this week for charges related to the killing, but on Wednesday Dean took full responsibility for Riddle’s death and claimed Hodges was not complicit in the crimes.

John Isaiah Hodges, 20, testifies in his defense Wednesday in Franklin County Circuit Court. Hodges was convicted Thursday of four felonies related to the 2017 slaying and robbery of 18-year-old Allyn Riddle of Rocky Mount.

Aaron Seth Dean, 21, is currently serving three life sentences plus 48 years for charges that include the first-degree murder in 2017 of his friend, Allyn Riddle. Dean’s friend, John Isaiah Hodges, was on trial this week for charges related to the killing, but on Wednesday Dean took full responsibility for Riddle’s death and claimed Hodges was not complicit in the crimes.

Photo by NEIL HARVEY Aaron Seth Dean, 21, is currently serving three life sentences plus 48 years for charges that include the first-degree murder in 2017 of his friend, Allyn Riddle. Dean’s friend, John Isaiah Hodges, was on trial this week for charges related to the killing, but on Wednesday Dean took full responsibility for Riddle’s death and claimed Hodges was not complicit in the crimes.

A long and deeply emotional jury trial in a Franklin County slaying reached an unexpected conclusion Thursday, with jurors returning guilty verdicts on four of the five charges at hand, then refusing to deliver a sentence.

John Isaiah- Hodges was tried across three days for his role in the death of Allyn Gray Riddle, a teenager shot and killed in his Rocky Mount home in the summer of 2017.

Another man, 21-year-old Aaron Seth Dean, pleaded guilty last year to a slew of charges that included Riddle’s murder and the theft of more than half-a-dozen of Riddle’s guns, and he’s currently serving three life terms plus 48 years in prison.

Although Dean ambushed Riddle with a sawed-off shotgun and fired the fatal shot, Hodges accompanied him to the Riddle home that day and left with him afterward, and he was criminally charged as well.

The extent of his knowledge and involvement was the primary subject of debate during the trial.

After about three hours of deliberations by the jury, Hodges was found guilty on four felony counts — of being a principal in the second degree or accessory before the fact to capital murder, to robbery, to armed burglary and to grand larceny of firearms.

Under Virginia statute, he faced punishments ranging from a minimum of 45 years in prison to up to three life terms behind bars, and during Thursday’s sentencing arguments, jurors heard wrenching testimony from witnesses on both sides of the court.

Allyn Riddle’s parents spoke tearfully and in depth about the intense loss and devastation they experienced following the unprovoked murder of their 18-year-old son in his own home.

Family and friends of the defendant meanwhile, in their testimony, cited Isaiah Hodges’ developmental difficulties and unconventional personality, factors they claimed caused him to be led astray by Dean, his longtime friend.

More than two hours after sentencing deliberations began, Franklin County Commonwealth’s Attorney A.J. Dudley and defense attorney Patrick Kenney came back into court to approach the judge and to address an issue.

Dudley informed Judge Clyde Perdue the jury had reached “an inability to tender to us a recommended punishment within the range set forth in the instructions,” which, given the framework, suggests they likely wanted to go below the 45 year minimum.

Virginia code says that if a jury cannot arrive at a punishment, then the court, the prosecutor and the defense attorney can agree to have the judge set the punishment himself, based on sentencing guidelines, as would happen in a bench trial.

Perdue dismissed the jury but thanked them for their efforts: “Be proud of what you’ve done and the duties you’ve taken on.”

He is now expected to sentence Hodges sometime in August.

Citing the lack of finalization, Dudley and Kenney declined to comment on the case but both said they had not encountered a jury trial in which the jurors were excused under such circumstances.

That reversal was yet another twist in a case that had no shortage of unusual elements.

Both Dean and Hodges have since said that together, as far back as middle school, they nursed dreams of becoming vigilantes targeting drug dealers, or setting off on bounty-hunting “missions” to places like Iraq or Pakistan.

Such ambitions were highly unlikely, but authorities claim the duo hoped to use Riddle’s weapons to pursue some version of those quests, and the centerpiece of the prosecution’s evidence during trial was a lengthy recorded statement Hodges gave police less than 24 hours after Riddle was killed.

On Aug. 19, 2017, he voluntarily went to the Franklin County Sheriff’s Office and, for three hours, spoke to Investigator Holly Willoughby about Riddle’s death.

Jurors were shown the entire video, and early on, Hodges seems animated, almost bubbly. He says he went to Riddle’s house with Dean, who had a cut-down shotgun in his car. He claims Riddle let them in but told them he had to take a shower. After retrieving the shotgun, Hodges says, Dean sent him outside. He says he then heard a gunshot and saw Dean emerge from the house carrying guns. They then drove to another house on Riddle’s land where Hodges says Dean took more guns, hunting rifles that had been in the family for decades.

“He actually murdered someone. I didn’t think I was going to be involved in a murder,” Hodges exclaims in the interview.

About an hour in, however, Willoughby forces Hodges to be more straightforward.

“Something really, really bad has happened,” the detective tells him. “This is the real deal. And this is where you’re going to have to make a decision about what you’re going to do.”

Across another two hours, she challenges Hodges on his account and, his tone growing more serious, he tells her that before the shooting, Dean asked him to go on “a mission,” a “snatch-and-grab.”

“The plan was to grab the guns from him. Not to kill anybody,” Hodges says.

From Willoughby’s questioning, he volunteers that he gave signals to Dean while Dean was retrieving the shotgun from the car. He also says he was aware Dean didn’t want to leave “any living witnesses,” but claims he tried to talk him out of killing Riddle when he suspected that might happen.

By the end of Willoughby’s interview, Hodges consents to release a sample of his DNA without a warrant, and tells his parents, on camera, he was involved in a murder as an accomplice.

After the video, defense attorney Kenney cross-examined Willoughby, challenging that investigative approach. He argued she had not read him his Miranda rights and pressured him into his confession.

“With nothing, you believed Isaiah was lying,” Kenney told her.

“He gave a mess of a statement, there’s no doubt about it,” Kenney later argued, but said, “There were zero leads in this case before Isaiah Hodges.”

Dean was arrested soon after Hodges’ statement to police, and reportedly gave his own lengthy confession.

Kenney called Dean as a witness, and he appeared in court Wednesday wearing handcuffs and a yellow Western Virginia Regional Jail jumpsuit.

In a quiet, halting voice, Dean claimed that while he had told Hodges about “a possible mission” he had not told him of his plans to commit murder or robbery.

He said in court he did not have “a satisfactory answer” for the motivations behind his crimes.

“I suppose I thought by killing Allyn and taking his guns, it would be a dry run to see what I was capable of,” he said.

Hodges himself also gave testimony, the last defense witness, and his account roughly mirrored the earliest phase of his videotaped interview. He denied knowing about Dean’s plans and claimed that, under pressure of the interrogation, he had lied to Willoughby about signaling Dean or having a plot.

“I just wanted to get out of there,” he said of his police interview.