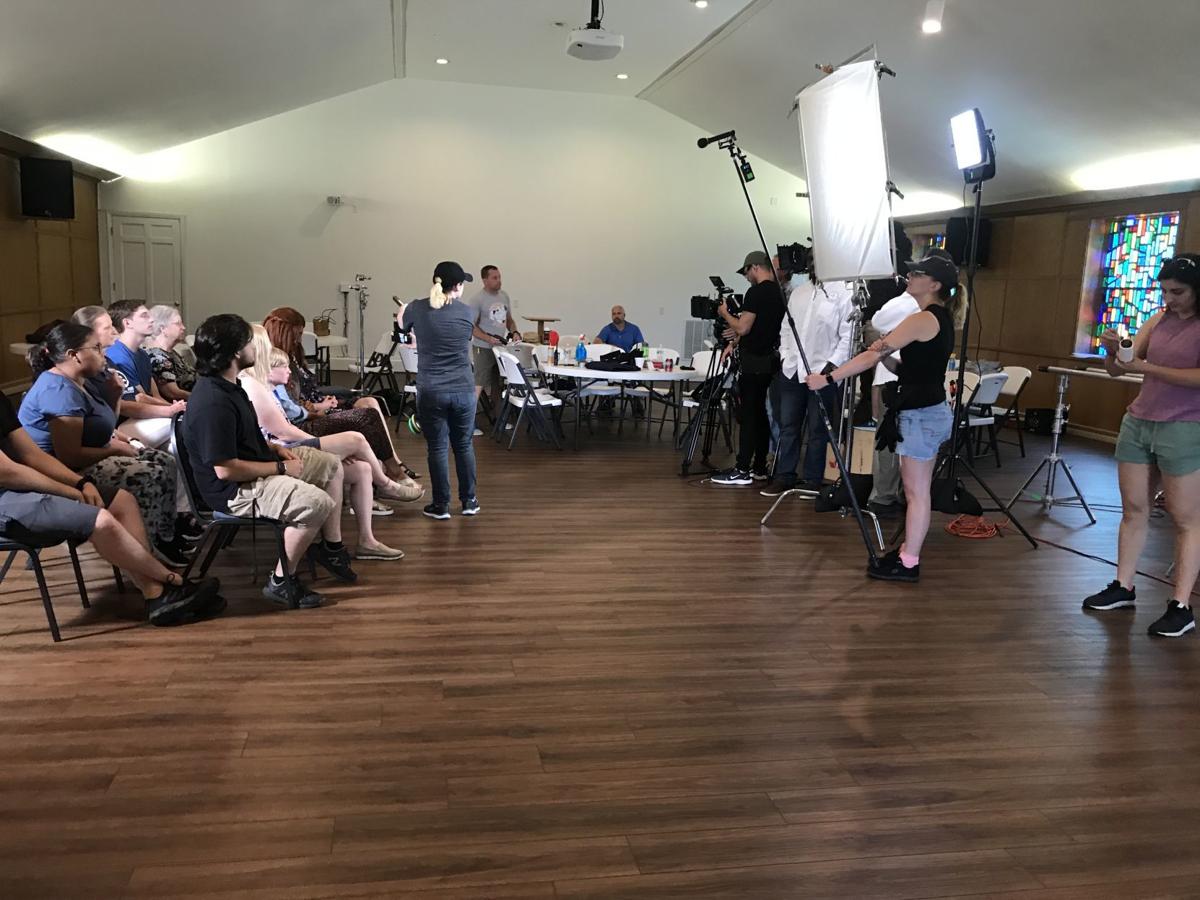 A camera crew films a scene showing a crowd’s reaction to testimony by C.J. Martin. The actors playing Martin and JT Clark are in the white shirts behind the large white screen at right. 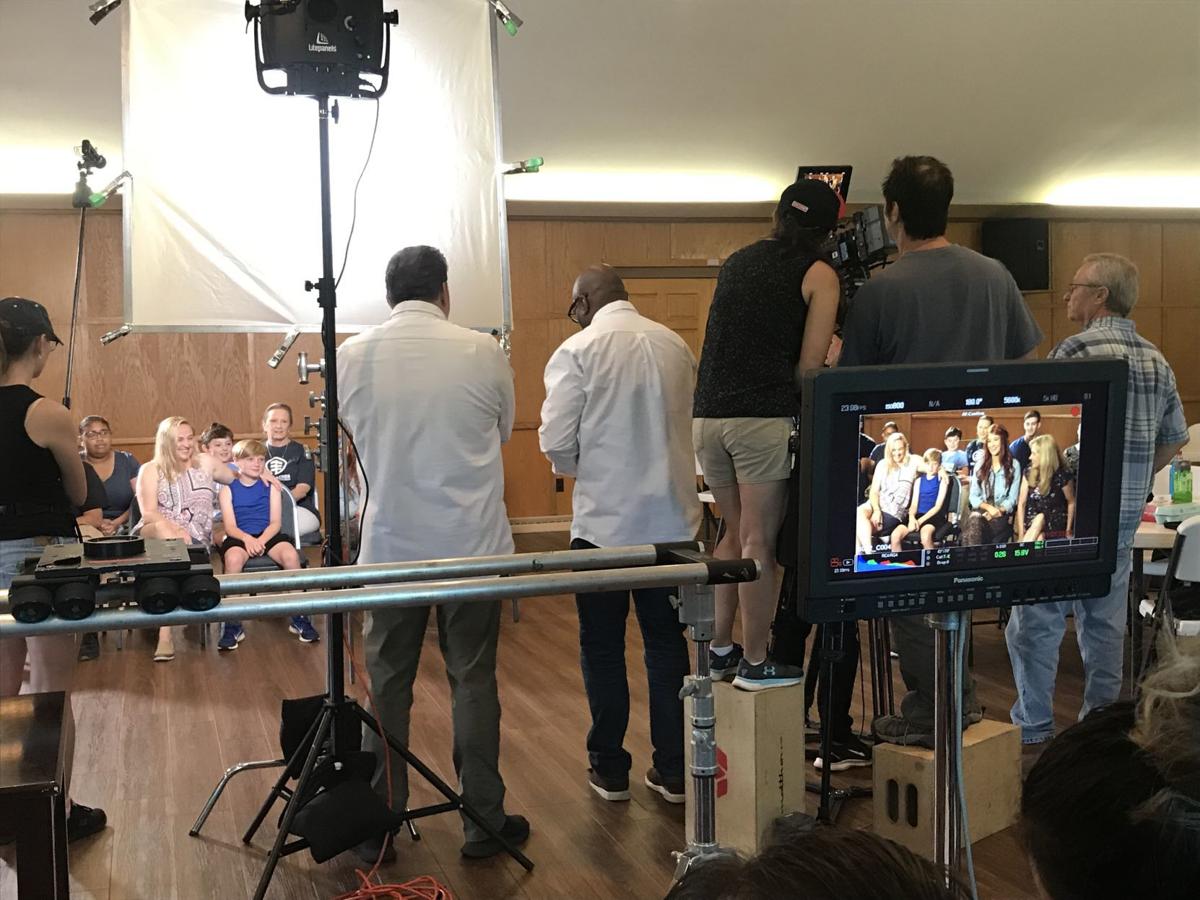 The scene being filmed for “My Brother’s Crossing” shows on a monitor in the background. Martinsville residents Tonya Bredamus and her son, Liam (in bright blue shirt), are seated in the front row.

A camera crew films a scene showing a crowd’s reaction to testimony by C.J. Martin. The actors playing Martin and JT Clark are in the white shirts behind the large white screen at right.

The scene being filmed for “My Brother’s Crossing” shows on a monitor in the background. Martinsville residents Tonya Bredamus and her son, Liam (in bright blue shirt), are seated in the front row.

The story between C.J. Martin of Martinsville and J.T. Clark of Boones Mill is playing out all across the region once again, this time on film.

A movie is being locally made based on the experiences the two men talk about in their testimonies, which were featured in Clark’s book “In The Blink of an Eye: Forgiveness in Black and White.”

In August 2015, Clark’s brother and sister-in-law, Bobby and Pam Clark, were at a worship service at T.R.A.S.H. Ministries in Collinsville. Martin and his son were at a football game at Bassett High School.

When both pairs left for home, they had to maneuver around a detour on T.B. Stanley Highway. The Martins were in a pickup truck, and Bobby and Pam Clark were on motorcycles.

The Clarks did not survive the accident.

Martin’s court date was set for October. J.T. Clark showed up and said he would pay Martin’s fine. The judge set the fine at $5 as the story of forgiveness and brotherhood was born.

Martin is the pastor of House of Purpose Ministries. J.T. Clark ended up forming the ministry My Brothers’ Crossing. The men often minister together.

In November, Clark released his book about the situation.

Since the release of his book, various movie producers have contacted him about making films based on the story, Clark said. He wasn’t comfortable with any of them until he met Tony D. White of Dallas.

White is the executive producer and lead producer. He said he has made 18 films. His most recent was “Never Heard,” which left theaters in November and is headed for Netflix, and his next project will be another faith-based film, “Help,” starring Wesley Snipes.

White started off making films to make money, he said, and “once I got to a certain level I could pick and choose what I want to do.” He said he chose faith-based films because “I wanted to bring positivity to the screen instead of negativity. My goal is to bring good stories.”

He said his films are financed through investors, plus “I fund some – wherever it can come from.”

The publisher, Trilogy Publishing, sent White the book, White and Clark said. After reading it, White said he thought, “‘I’ve got to be part of this story.’” In February, he called J.T. Clark and told him he’d like to make his movie.

Clark said other producers seemed to be more interested in dramatizing what happened to make more money, whereas he felt White respected the integrity of the actual story.

“When Tony and I talked in February it was all about sharing the testimony God had entrusted us with,” Clark said.

Writing the script “has been a collaborative effort between my wife and me and Tony and his wife Edna,” Clark said.

Edna White would write about 10 pages of the script at a time then send them to the Clarks for their review and recommended changes, Tony White said.

“It was her talent to adapt the book,” Clark said. “They wanted us to be comfortable with it. They asked to talk with other primary characters” in the story while they were developing the script.

White hired a crew of about two dozen for “My Brothers’ Crossing,” though normally his films have crews of 35 to 40, he said. They come “from all over the country: Los Angeles, New York, Chicago, Cincinnati.” Ricky Borba is the director.

The crew arrived May 18 and is staying in Rocky Mount, White said. Scenes have been filmed in Boones Mill, Rocky Mount, Stanleytown, Bassett and Martinsville.

Clark and Martin have been on site for most of the shooting. Daniel Roebuck plays Clark in the film, while Clark had a small role as a fireman.

Actor James Black plays Martin. He got the job — and the script — about two weeks ago, he said.

The Dover, Ohio, native has lived in Los Angeles in recent years. “I have the faintest of Southern accents,” he said, “but when I start to preach it seems like it slides out there.”

He harks back to the style of the preacher he had in college to preach in his scenes. Plus, “I spoke to C.J. directly, and he infused his spirit in me,” Black added.

“I’ve always wanted to do a part like this, but not too many parts like this exist,” Black added.

In his portrayal of her husband, Black “was so good at what he did it was like I was watching” her husband, Fernanda Martin said.

However, seeing an actress playing Martin herself was a different story.

It was odd at first, she said, but she found that Payne took on her persona well.

“As we were talking I saw her start doing stuff I did,” Martin said, pointing out the way she holds her hands as an example. “She mimicked me really quick.”

Martin guided Payne in wardrobe choices. She pulled together pieces from Payne’s existing wardrobe, the store, and friends and family.

“I love her,” Payne said of Martin. “This has been the most incredible experience. I’ve played characters for 20 years, but none of this magnitude. Her story epitomizes the Psalms 31 woman.”

In the beginning, the movie process caused “a lot of anxiety. It pulled up all the emotions we had,” Fernanda Martin said. Before long, she said, “this process has brought about more of a healing to our family.”

Preparations for his role began by being shown a picture of Harrison, and he later met the pastor. “He seemed like a real nice guy,” Barrett said.

His scenes include sitting with the character of J.T. while J.T. gives his testimony and a scene at the speedway.

“The real J.T. told me, ‘This is a pivotal scene in the movie’ — putting the pressure on me,” he chuckled.

Tonya Bredamus is used to film production. Her teenaged daughters, especially Audrey, do plenty of that themselves, with their mother assisting.

She started out as production secretary, which she said sounded “like something I can do.” She’s been moved up to production assistant. The bulk of her work includes coordinating the talent and getting food for the sets.

She had worked 12-hour days for 11 straight days, she said on Wednesday. Her daughters, Emma and Audrey, play J.T.’s family members, and her son, Liam, is in a church congregation scene with her.

Neither Barrett’s nor Bredamus’s roles are paid, they said.

“My Brothers’ Crossing” will be released by Thanksgiving weekend, or Christmas weekend at the latest, White said.